Q & A on ASU with House of Sparky

Who are the Arizona State Sun Devils? Let's find out in this week's Q & A!

Share All sharing options for: Q & A on ASU with House of Sparky

Whelp. We're 4 weeks into the season and 1 week into conference play. This week, The USA ASU Sun Devils come to town, looking to continu their early season momentum. Today, we talk to Brad Denny, managing editor at House of Sparky, to learn a little bit more about Todd Graham's newest team.

3 (4) games into the Todd Graham era at ASU - what's the early verdict?
It's hard not to like what's happened so far. The Sun Devils are arguably a botched PAT away from being 4-0 and somewhere around the Top 20 right now. But a 3-1 record and a place atop of the South right now is pretty good.

While his hiring generated a lot of hate nationally, Graham has thus far delivered on every single promise he's made (insert generic job hopping joke here) since taking over in December. He's turned the program's culture around, snagged some major recruits and, most importantly, won games. He's infused legitimate optimism into the program, which is a minor miracle after how last season ended.

What changes to the Erickson offense and defense has Graham made?
One of most repeated phrases during his tenure has been "high octane", and it shows on both sides of the ball.

Offensively, the team went from a horizontal pass-heavy spread to a run-heavy spread attack. The team is running on over 60% of their plays, and have a trio of talented backs-Cameron Marshall, Marion Grice and DJ Foster-sharing the load. The big revelation has been Taylor Kelly, who was an afterthought in the three-man competition to win the team's quarterback job, but has been on fire. He's a legitimate playmaker with his arm and his legs, and has the nation's ninth highest passer rating.

On defense, the team had run a passive 4-3 scheme for years, but that has been tossed aside for a very aggressive 3-3-5 look. It's paid off big time, with ASU leading the nation in tackles-for-loss, and in the top 10 in sacks and total defense. The scheme has unleashed players like defensive tackle Will Sutton and linebacker Chris Young to make countless big plays so far. 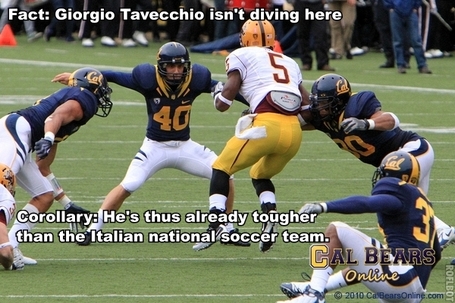 Two years ago, Cal dropped 50 on ASU in a cold day at Memorial. Will Cal's offense be anywhere as explosive this year?

What are some of the differences around the football team as a whole between the Erickson and Graham era?
It's all been about discipline: Erickson imposed none, and Graham wants nothing more.

Last season, ASU was 6-2 and destined for the South title. But since there was no discipline, the team rested on their perceived laurels and fell apart. During his entire tenure, the Sun Devils were very talented, but committed so many stupid and avoidable mistakes, they remained mired in mediocrity.

So far, that hasn't happened under Graham. There have been a lot of growing pains in such a radical shift, but overall, the players have bought in surprisingly well, and it's reflected in the early success. The Sun Devils are no longer their own worst enemy. Now, they just have to worry about their opponents.

Who has emerged on offense and defense who wasn't talked about pre-season and wasn't really expected to be a big contributor?
On offense, it is quarterback Taylor Kelly. During the offseason, it was expected that Mike Bercovici or Michael Eubank would win the job, but Kelly quietly worked hard and took the job during fall camp and hasn't looked back. He leads the Pac-12 in passing efficiency and has proven to be much more than a game manager.

Defensively, it is spur ‘backer Chris Young. In ASU's defense, the "spur" is a hybrid of a linebacker and safety, and Young has been exceptional. As a juco transfer, he got off to a slow start during camp by being out of shape, but he's been a leather-seeking missile thus far. Only four players in the nation have more than his 8.5 tackles-for-loss, and his range and closing ability are exceptional. 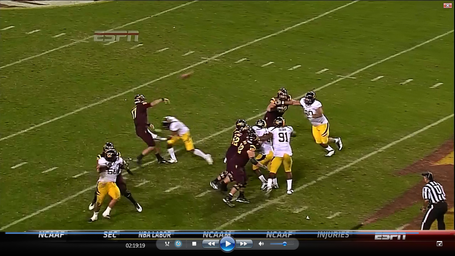 This is the type of pressure Cal's struggling D-Line will need to force this game.

How much do you miss Burfict??? Be honest!
With Burfict gone, ASU's reign atop the penalty rankings is dead. It's no coincidence that during his three seasons, ASU ranked 120th, 114th and 120th in the nation in penalties. Now, with no Burfict and Graham's disciplined approach, ASU ranks 12th.

In all fairness, he was a stud defender his first two years, but no ASU fans miss the Burfict of last year, who (another callback to Erickson's discipline) got out of shape and was disinterested in using his all-world talent.

Hopefully, he turns it around in the NFL, but for ASU, it was addition by his subtraction.

ASU has been one of those programs that has been "okay" to "pretty good," depending on the year. What kind of path do you think the program needs to take for it to be mentioned among the Michigans, Alabamas, and USCs of the FBS?
For the last 20 years or so, ASU has been called a "sleeping giant". All the pieces are in place: great facilities, power conference, exceptional campus in a major city, very good tradition, yet it's not translated on the field except for 1996.

What I think needs to happen is what Graham is starting to do-blow everything up. For years, the program brought in coaches and was led by an administration that felt the Sun Devils were just a step or two away, when in fact they weren't. The assets are there, but with such a poisoned atmosphere and culture around, it could never go anywhere.

Graham has stripped things down, and is building a foundation around commitment, discipline and high standards from the ground up. It's a refreshing change and one that should work down the road. If Graham's new and radical approach doesn't pay off in three or four years, then I don't know that anything will.

Who do you want to punch in the face?
Larry Scott and whoever is leading DirecTV. Seriously, get it together guys. I'd like to watch the Pac-12 Network at some point.