A Golden Spotlight on Cal Football vs. the USC Trojans

We take a closer look at the Cal defense making big plays against the USC offense.

Share All sharing options for: A Golden Spotlight on Cal Football vs. the USC Trojans

All the lipstick in the world won't make this pig look any better. Or help our Oline block someone. Anyone. Let's just get right to the shiny pictures. Which aren't particularly shiny this week thanks to a certain greedy satellite provider who shall not be named.

'sc lines up with 22 personnel.(two tight ends, two backs) This spells doom on so many levels. Two tight ends!?!? That's just mean. Cal looks to be in a Cover One. Speedy Williams is left in solo coverage with Robert Woods. To add insult to potential injury, Barkley declares the heart of the Cal defense to be Sanchez. 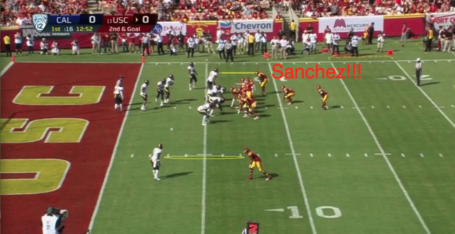 At the snap, both tight ends as well as the fullback start to run patterns. The tailback steps up to pass protect. Barkley immediately negates the benefit of these alternative routes by locking on to Robert Woods. Yes, ladies and gentlemen. This is how a future NFLer stares down a receiver. 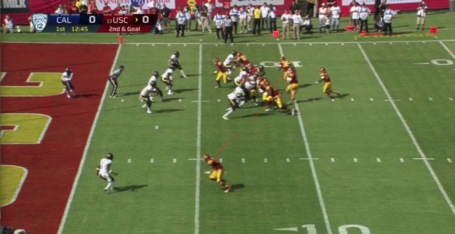 The Cal defenders decide to try something strange and new...and cover both tight ends and the fullback in the flat. It doesn't matter because Barkley has already made up his mind to force it to Woods. Williams is out on an island with no help. 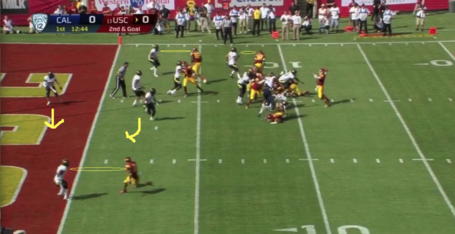 But there's a disconnect. Williams has vision on the ball before Woods has even turned to look. It's unsure whether Barkley was trying a back shoulder throw, a fade pattern, or was just channeling his inner Ayoob. (too soon?) Woods is apparently expecting something thrown more towards the corner. 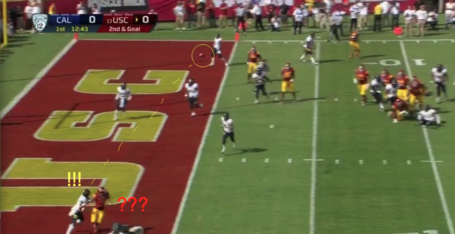 Speedy climbs the ladder and takes points off the board with a clutch red zone INT. Don't weep for Woods. He's still a future 1st rounder. Barkley probably cost himself $$$ with that throw and put another nail in the coffin of his Heisman campaign. Word to the wise: coming back to take ballroom dancing isn't always a good thing. 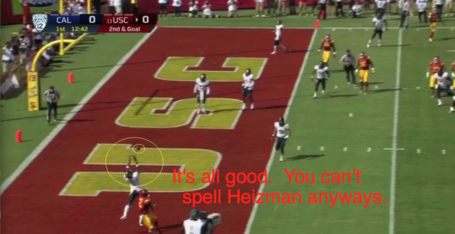 Once again, 'sc comes out with their 22 package, two tight ends and two backs. Cal looks to be in a Cover One Man. 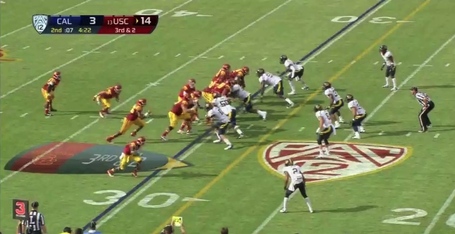 Immediately after the snap, Barkley looks like he's moving to hand it off. The 'sc Oline surges to the left like they're run-blocking. The Cal Dline surges forward, but the Cal LBs stay at home. 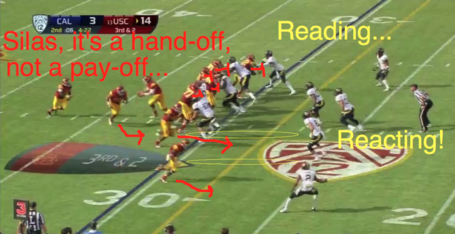 Barkley pulls the ball back. Lee runs a quick hitch while the playside tight end heads down the seam. The fullback runs an out in the flat while the tailback steps up to get in the way of Cal's OLB, Scarlett. 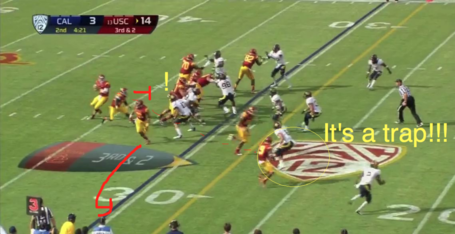 Barkley looks first to Lee, but Logan didn't bite (!?!?) on the play-action and jumps in front of Lee. Barkley has to go off his first read and checks back to his tight end who is (all together now) RUNNING FREE DOWN THE MIDDLE. 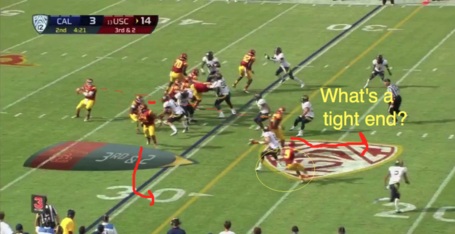 Barkley let's it fly. He sees visions of 6 points. And angels. And unicorns. With sparkling rainbows. But Scarlett doesn't give up on the play despite having the 'sc tailback in his face. He times his leap perfectly and deflects Barkley's pass. 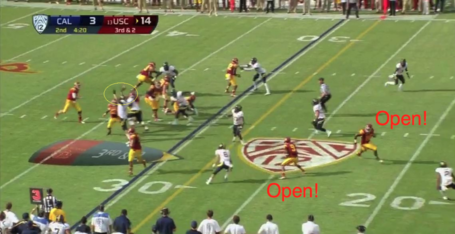 Johnny-on-the-spot JP Hurrell alertly plays the ball in the air and out-jumps Lee for the INT. Who knows what JP will end up doing with his life. But on this day and at this moment, he out-played two NFL 1st rounders. That's pretty darn cool. 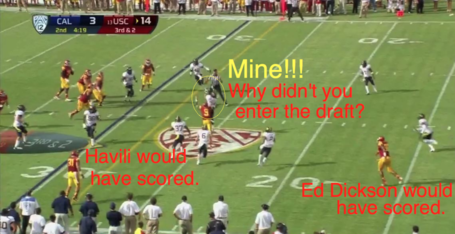 Nowhere to go but up, right Cal fans? Go Bears!