Empathizing with the Enemy: A Q & A with Conquest Chronicles about the USC Trojans

Share All sharing options for: Empathizing with the Enemy: A Q & A with Conquest Chronicles about the USC Trojans

We don't usually have much in common with the USC folks. They're a private school, we're a public school. They have plenty of memories of wins in recent Rose Bowls, we have memories of cold, unpleasant losses in San Diego. They have an NFL quarterback, we have a quarterback with a cool haircut. They always win Cal-USC games, we never win Cal-USC games. The list could go on forever.

But things are different this year! Their offensive line is no longer an impermeable fortress of 5-star linemen. Last week against the Lobsterbacks, the USC O-line struggled mightily with pass protection. Their center Cyrus Hobbi was the weak link in the line, a weakness Stanford exploited over and over. O-line issues? Center problems? That sounds very familiar--perhaps we and USC aren't so different after all. Will USC fans join hands with us and sing Kumbaya or will they put us in our place with another beatdown? To answer these burning questions we spoke with DC Trojan and trevor.wong of Conquest Chronicles. Imbibe their wisdom after the jump.

1. USC always manages to pull things together and turn in a solid performance against Cal. Explain why this will happen once again this week.

DC Trojan: Because Cal never really looks for the tight ends. More seriously: let’s assume that Khaled Holmes doesn’t make it back into rotation. Cyrus Hobbi won’t have made the transition from guard to center in a week, but the coaching staff won’t have sat around and hoped that magically they can run the same set of plays. There were some pitch plays in the Syracuse game that showed promise against a defense that was working hard to rush Barkley and stop long plays, for example, and perhaps even the dreaded bubble screen might make a reappearance. Once ‘SC is able to sustain some drives to give the defense a rest, and establish the run, they should be able to work on pressuring the Cal secondary and get some points going.

trevor.wong : Because USC won’t fall flat on its face for two straight weeks. As bad as the Trojans played against Stanford, they were in the game till the very end. And you figure if they make a stop here on defense during that last quarter or actually sustain an offensive drive in that second half, we might be talking a little bit differently this week. I would find it very surprising to see ‘SC come out flat in two straight weeks.

2. USC always manages to pull things together and turn in a solid performance against Cal. Explain why this will not happen this week.

DCT: As noted above, you can’t make a guard into a center in a week, and that means that Barkley will either have to call alignments as well as offensive plays, or hope for the best. If ‘SC isn’t ready for Cal to attack the offensive line to rush Barkley and bring linebackers forward against the run, it could be a short day on the field for the offense. Equally, if ‘SC can’t get pressure on Maynard and continue to leave large cushions in the secondary, or try to attack Cal’s running game and whiff on Sofele, Anderson, or (worst case) Bigelow, then things could go south fast.

TW: Because Cal’s defensive front is similar to Stanford’s and we all saw how that gave USC fits. Granted, Khaled Holmes was out, but as DC Trojan noted, you can’t replace an All-American center in one week. Zach Maynard has vastly improved from last year and the Golden Bears have the running game to control the clock on the road and keep USC’s offense off the field. Add it all up together and if USC lets Cal hang around like it did Stanford, then it won’t be pretty at the end.

3. The USC O-line was blown up in Khaled Holmes' absence. Does it sound like he'll return this week?

DCT: I doubt it. Let’s assume for the moment it’s a high ankle sprain; that would mean another couple of weeks out at the minimum. Even if he was partially recovered, the risks of rotating him in for certain plays surely has to be too high.

TW: I figured if the injury wasn’t as serious, he would have at least given it a shot against Stanford. Either that, or USC is erring on the cautious side. And I have no problem with that, either. Obviously, you risk further injury and damage trying to push the issue. But I figure Holmes probably won’t be playing this weekend. Rest him this weekend, give him another week of rest because of the bye week and hopefully have him ready for the Thursday night matchup in Utah. 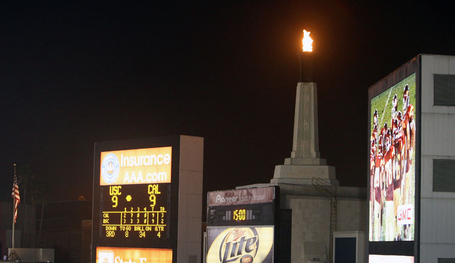 4. Why does it seem like we always play USC after they have dropped a game? Can you guys stop taking your frustrations out on us? Might I suggest UCLA as a better target?

DCT: I think we’d all be happy to take UCLA as a punching back but it appears that they might have backed into hiring someone who can actually do something with the players that Neuheisel recruited.

TW: Better yet, Jeff Tedford must be wondering the same thing.

5. What explains Matt Barkley's subpar performance against Stanford? Pressure from the Cardinal front 7, great coverage by the secondary, just an off day, or what?

DCT: I think a combination of all three. The pressure and lack of open players certainly contributed to him rushing passes, and I think he got his bell comprehensively rung by the end of the game. This is purely a personal opinion: I do wonder if his efforts to build arm strength over the off-season have affected his touch, but some of the passes he threw against Syracuse were pinpoint.

TW: As DC Trojan said, it was a combination of all three. Stanford surely game planned against Holmes not playing and coach David Shaw made it a point to put as much pressure on Barkley as possible. And as the game wore on, you knew that pass rush was coming. USC’s offensive line had no chance against Stanford’s front-seven and combine that with a lack of running game and Barkley’s receivers not able to sniff daylight, it’s no reason why the offense as a whole really struggled. 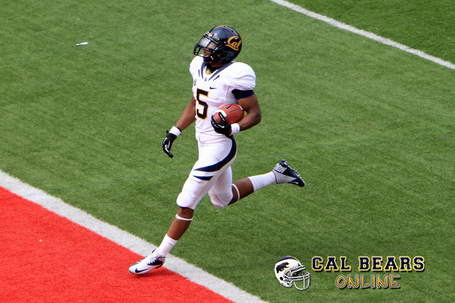 Look for Bigelow to get more touches this week

6. Which one of your superstar WRs is going to gouge Cal worse?

DCT: Just to be different, I’ll say Nelson Agholor. He’s got pace like Marqise Lee but no one’s looking for him - and he had a couple of critical tackles on Stanford returns last week as well.

TW: DC Trojan has an interesting take, but can I say both? Is it possible for both Marqise Lee and Robert Woods to get shut out in two straight game? I think not.

7. People talked about depth as a potential concern for the Trojans this year. Has that concern rang true so far or was it needless worrying?

DCT: Oh, it wasn’t needless worrying. When McNeal and Redd were both briefly sidelined last week, there was a DJ Morgan spaced hole in the line of running backs, and poor Soma Vainuku was briefly pressed into play. That was worrying - part of Stanford’s plan was plainly to knock the shit out of ‘SC players and exploit the lack of depth. (I’m not suggesting that Stanford was being deliberately dirty on their hits, they were using their size advantage.)

Depth on the lines is going to be an ongoing problem as well - we’ve seen it before against Oregon given their emphasis on player rotation, and I would be surprised if other teams, especially in the South Division, don’t try to wear down ‘SC the same way.

TW: It’s certainly true. As DC Trojan noted, when McNeal and Redd both went down last weekend, I’m sure most fans thought that could have been the season. Both tailbacks injured, an All-American center sidelined, so what’s next? Defensively, ‘SC has been able to make up for its injuries and ineligibilities thus far (outside of that other cornerback spot), but offensively, the line is still young and learning. And at this point in the season, that’s probably the biggest concern for the team.

8. Who do you want to punch in the face?

DCT: whatever MBA-holding nitwit came up with the plan for rolling out the PAC12 channel, because they plainly badly estimated the appeal, especially outside of the conference footprint. I’m all the more vexed because the gamesmanship meant that the bar in Virginia that caters to SC alumni sensibly waited until the last minute to get a Dish subscription, which meant that I had already bought theater tickets for Saturday night. Harrumph.

TW: Any UCLA fan who thinks that the Bruins are better than the Trojans all of a sudden. Remember, it’s still three games into the season.

Who would I like to punch in the face? Whoever wrote that miserable USC fight song.