Woo wee! We're back! A date years in the making. When Zachary RunningWolf and his merry band of tree-sitters were wasting millions of dollars worth of tax payer money, we were worried we might never see this day. When we sat in AT+T Park last year and followed the construction on the webcam, we were concerned that we might not get everything done in time.

Maybe it's just my neurosis. Maybe all y'all had complete faith that the stars would align and the doublest rainbows to ever double rainbow would shine upon Memorial Stadium. If you did, your faith was repaid one thousand times over. What exciting potential!

Sadly, the day ended poorly as Cal lost to Nevada. But in the morning, there was much excitement in the air. Some fans even sought to express their love for Memorial stadium in art! 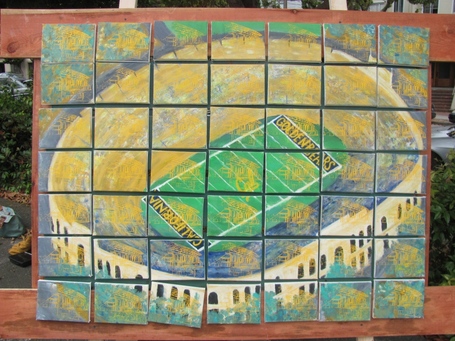 This is a collage of individual pieces of old Memorial Stadium with the outer wall of the new Memorial Stadium silk screened on each one. All being sold to benefit the widow of former Cal bandsmen Ethaan Boyer, who was murdered in a horrific burglary gone wrong. Feel free to provide some donations there if you want.

Yes, before the rough afternoon, people were really excited! In this post, let's take a look at the pre-game action! GO BEARS!

Look at how gorgeous the new grove is! Yknow, I lived in Bowles my freshman year and was an extension student (i.e. I was a spring admit and went to fake classes for the first semester). The extension classes are way over by People's Park (or at least they were in the 90s) and so I walked by this place twice a day every day for months. Never once did I consider going in there to frolic with the trees. Nobody was ever in there. It was a bit run down. Like People's Park North.

Now, it is an amazingly landscaped area that is clean and well kept. 1,000% improvement. All the grounds outside the stadium are like that now. I even saw people lounging in the grass after the game, just enjoying the various plazas, trees, benches, etc etc etc. Isn't that great? That is EXACTLY what the architects envisioned in their sketchings and today it came delightfully true! 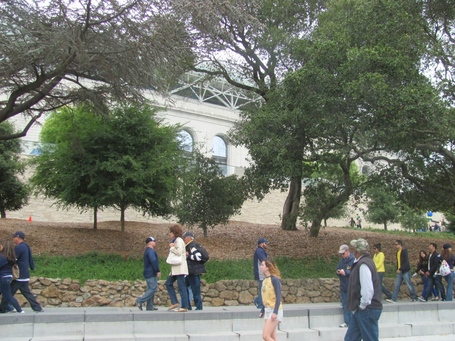 Disco Bear is back! 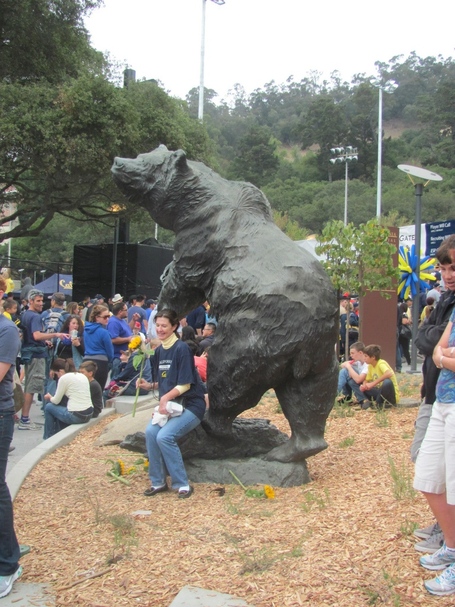 They had a lot of signage up like this. Welcome Home! This game was like a house warming party where only one guest shows up and he takes a sledgehammer to everything! Why did we invite Nevada?!?? 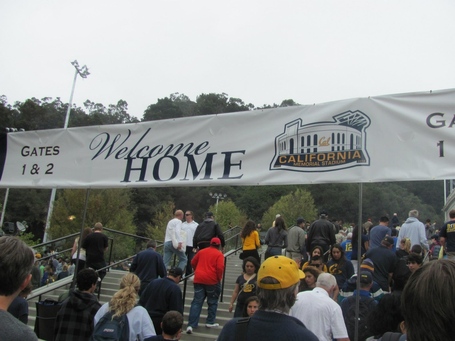 Another nice note was the directive signage. Here, they tell you that you are at the Concourse. I realize at other stadiums this is incredibly basic. But it seemed new to Memorial Stadium and extraordinarily well put together. 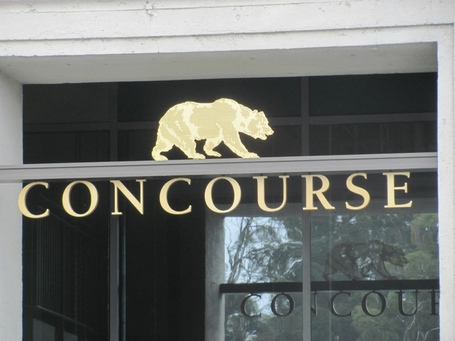 Lines to get in were long, but moved quickly. When I got in the team was walking by. There was a fence between us, but they were high fiving people. I did put my hand over and tried to snap some shots. It was all random, because I couldn't really see anything. Framing was TERRIBLE, so let me apologize ahead of time. 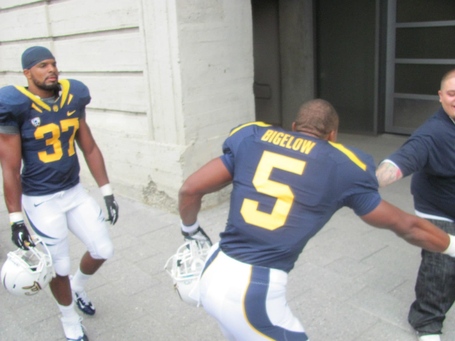 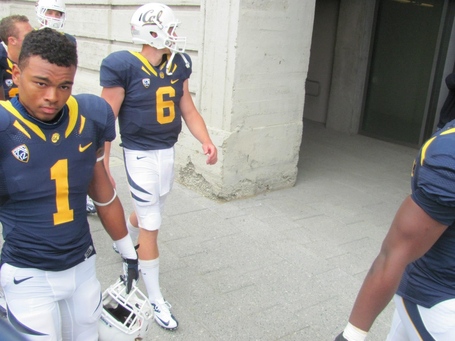 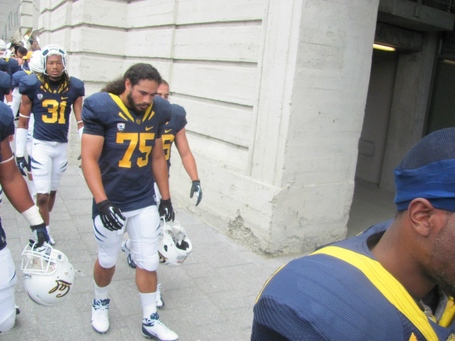 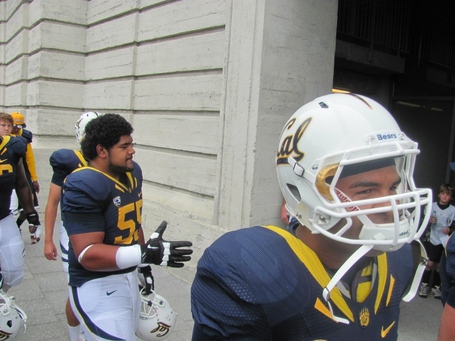 I got into the stadium JUST as the band was coming out. I do not know what the grass is made out of (not real actual grass, I am told). But it looked more green than ever. REALLY super green. Extra green. 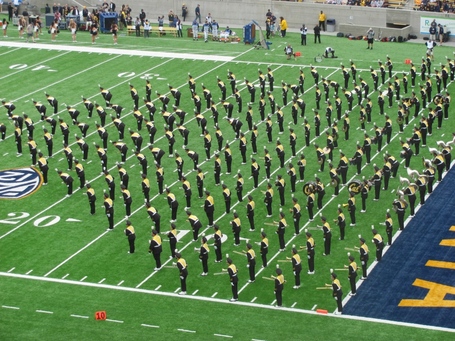 What Stanford did was tear down their old stadium and buy a new one at Ikea. What Cal did was retain the traditional essence of their old stadium, while augmenting it with modern amenities. It's perfect. Maybe I'm gushing too much. And I loved old Memorial. I loved how old it was, but I understood that it couldn't compete with modern stadiums.

You'll see more in future parts about how amazing the stadium is, but, man, it was easily the highlight of the day. 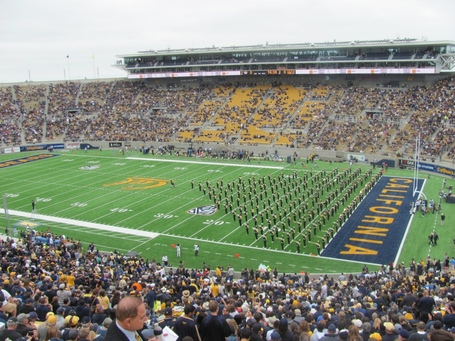 The Drum Major caught the baton (which is supposed to portend a victory, but, well, yknow). 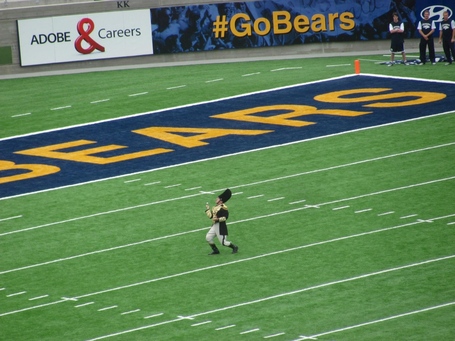 They have two new screens now. I think both are larger than the single screen we had before. This is amazing. When I was at Cal (OLD MAN ALERT!), they didn't even have one screen. And we had to walk uphill to all the games. Only one way. It was downhill on the way back. So, that hasn't really changed. But, seriously, it was a gorgeous new screen in each end zone.

Compared to the HD beast at AT+T Park from last year, they surely are tiny, but compared to what it was before, it's a massive improvement. 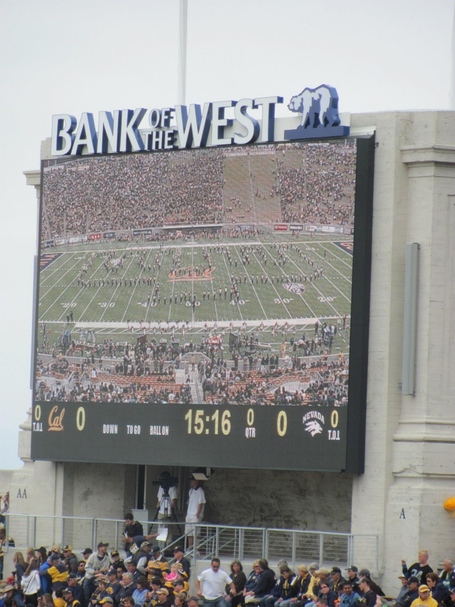 I noticed this banner randomly placed up on the east side. It looks very beautiful, but I'm not sure what the purpose was. It was only seen by a small percentage of the fans at the stadium.

They have new food options everywhere, including Top Dog and House Of Chicken And Waffles on the east side. I think it is great to have local East Bay options at the stadium. 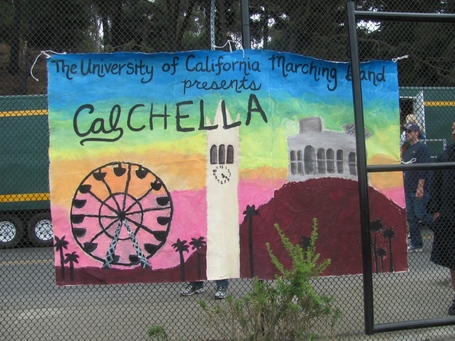 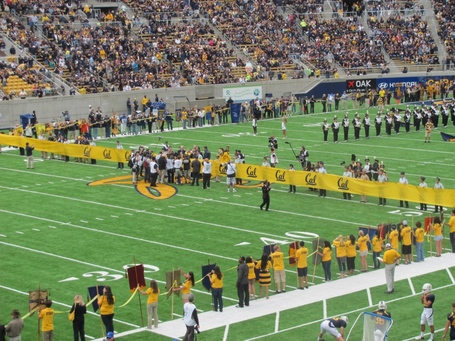 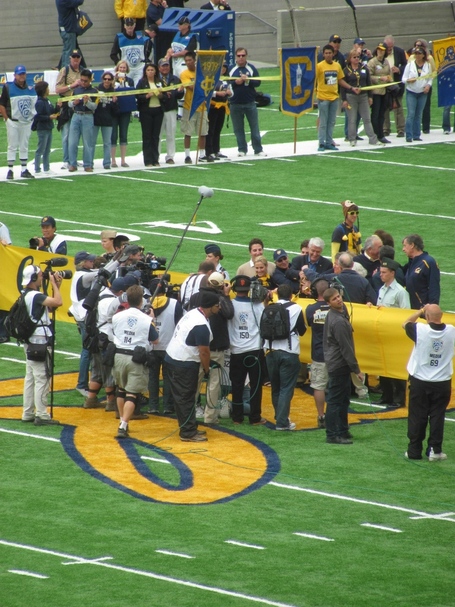 With a few slices of ceremonial scissors, it was time for the MAIN EVENT. Out comes the team! 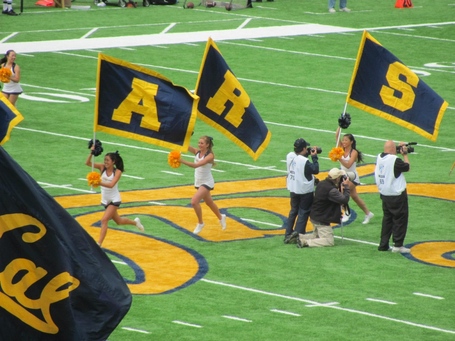 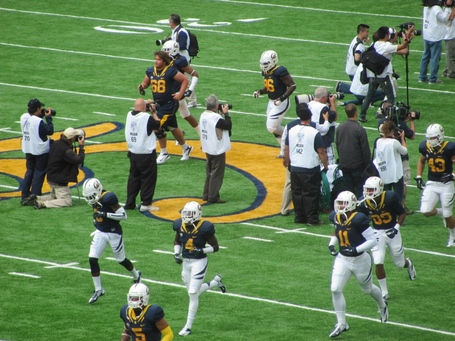 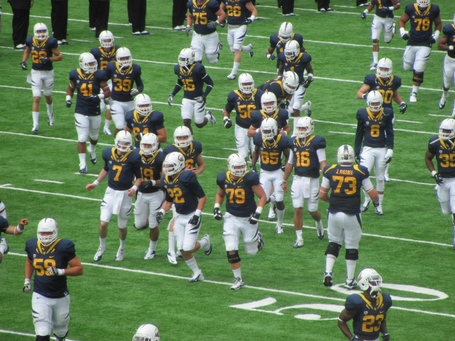 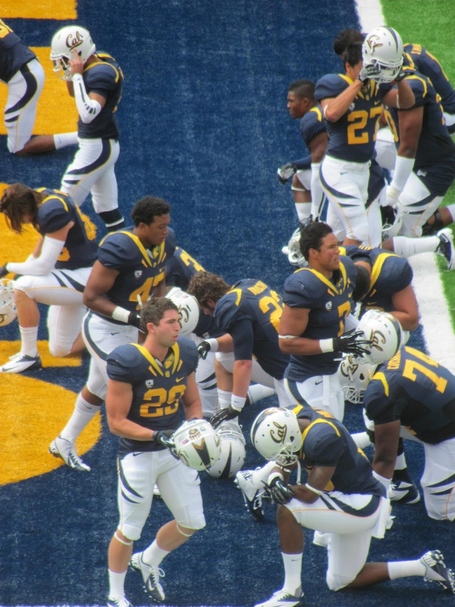 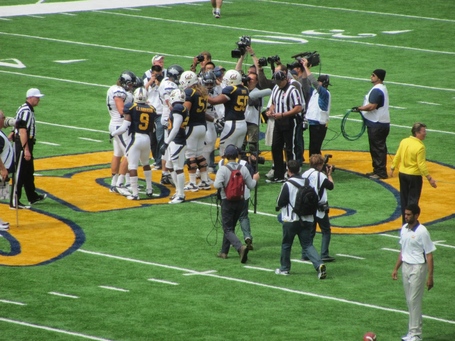 Soon, the game itself was upon us. I'll have some photos of game action coming soon. What did you think of all the pre-game activities and the stadium in general? GO BEARS!