A Golden Spotlight on Cal Football at Ohio State

Share All sharing options for: A Golden Spotlight on Cal Football at Ohio State

It's 2/3rds of the way through the first quarter. Ohio State uber-QB Braxton Miller just went Xbox on the Cal defense and outjuked everyone for a 55 yard touchdown. We've seen this before. On the road. Hostile crowd. Favored opponent with an athletic and fired up defense. This is where the wheels come off. Or not.

Instead, our sturdy Golden Bears put together one of the nicest touchdown drives in recent memory. It was a deft mix of runs and passes that kept the defenders off-balance. I was reminded of the crisp execution and tempo from the early Tedford offenses. Before we get to the film itself, I have to give a serious shout-out to our resident pchop and gif-master, Redonkulous Bear, for his help with this post. All the animated gifs are a result of his hard work and artistry. (So please be sure to thank him in the comments!) ***To view the gifs, please click on the images.***

Cal comes out with 12 personnel, 1 back and 2 TEs. OSU appears to be in their base Cover 2 defense with 7 in the box. 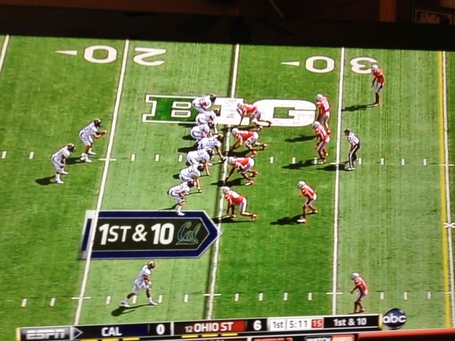 ... yeah. The line surges forward towards the strong side. 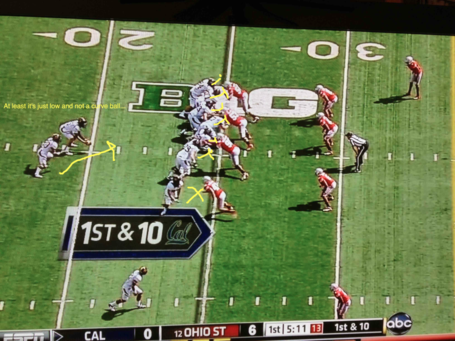 Maynard reads the unblocked weakside DE. The end stays outside... 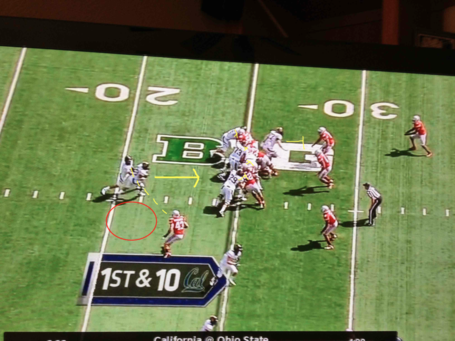 So Maynard hands it to Sofele who heads right up the middle. 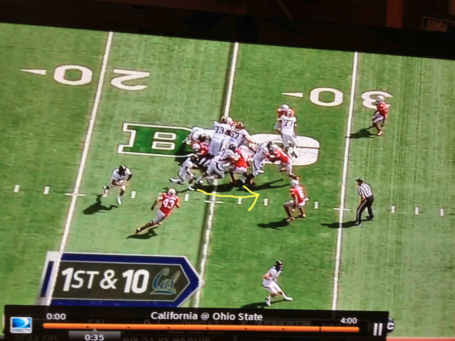 The hole closes quickly as a trio of Buckeye defenders all converge on Isi. Weirdly enough, #6 decides to jump on his own man's back. 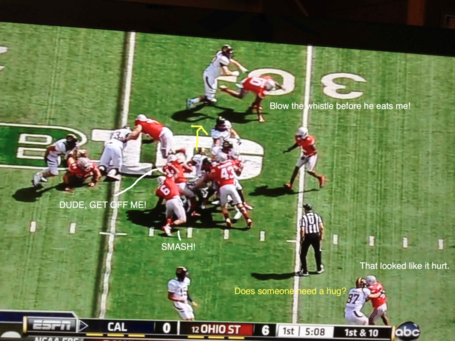 Sofele keeps churning his legs. Now that his would-be tackler has been helpfully dragged off, Isi is able to keep his balance and squirt outside. This is all heart. 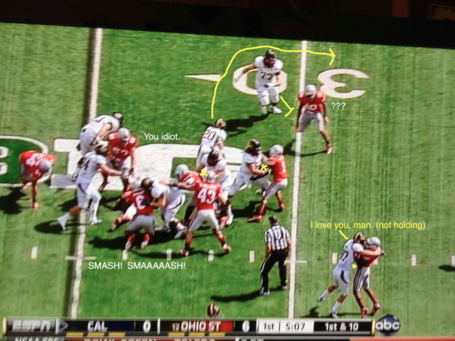 The Cal blockers are playing snap to whistle. OSU's CB relaxed because he thought the play was over and gets leveled by Tyler Rigsbee. This frees Sofele for a long scamper down the sidelines. 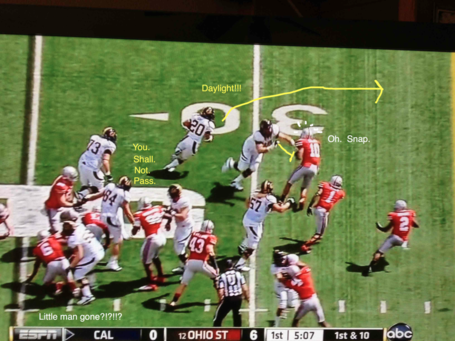 It's an off-tackle run to the left for four yards. Wark and Allen do a great job of locking down their guys. Schwenke isn't able to get to their tackle or this could have been another long gain.

Cal has 12 personnel, 1 back, 2 TE, and 2 WR. Pre-snap, Cal's tailback lines up at the far left of the formation (off screen) as a wide receiver. OSU looks to be playing zone and threatens to blitz. Because of the strength of Cal's formation, one of the OSU safeties has to shade near the top to watch the TE. In the past, a 2 TE personnel group for Cal was almost always a power formation used for a run. But here we go empty.

(Perhaps this is one of the double tight end wrinkles that Coach Tedford learned from Bill Bellichek during the off-season. And in exchange, we taught him how to center the ball for a field goal. Win-win!) 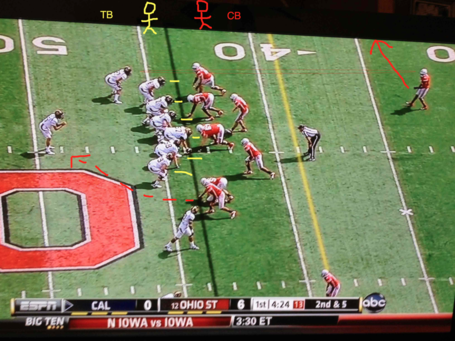 It's a blitz. The Buckeyes try to overwhelm Tyndall(RT) with two pass rushers. As he's supposed to do, Tyndall takes the inside man because the outside man has a longer distance to the QB. Maynard receives a good snap(!) and sees the blitz coming. 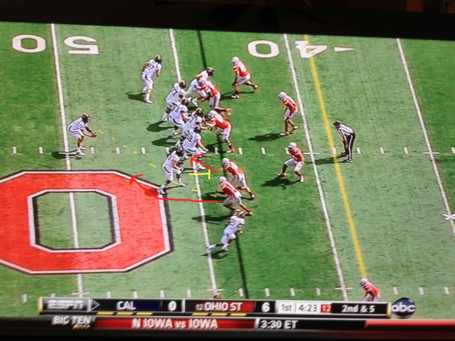 Because the OSU slot defender blitzed, Keenan Allen is left uncovered. Whether by design or a good pre-snap read, he runs a quick out. It may seem awfully convenient of the Buckeyes to leave our best player and Zach Maynard's favorite safety blanket open. But, this is also due to Cal's formation which puts KA in the slot instead of out wide. 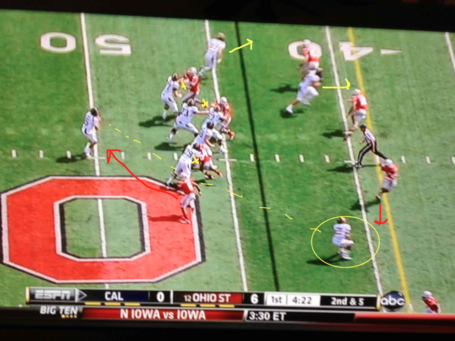 Coolly, Maynard drills an accurate pass in the face of the blitzing linebacker. Allen catches the ball and then uses some nifty moves for extra yardage. 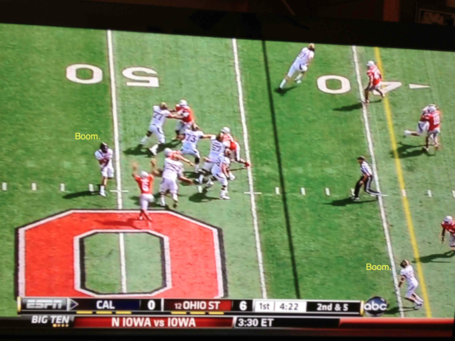 Cal runs to the strong side behind their fullback, Stevens, and tight end, Wark. They do a nice job creating a hole that CJ powers through for a four yard gain. This is an attitude play. Our formation says run. But we like to run. And we're gonna run. Sorry if we run you over.

Cal is back to 12 personnel, 1 back and 2 TE vs. OSU's zone. The Buckeyes have a LB on the line of scrimmage threatening to blitz. At the snap, OSU rushes 5. Maynard fakes the hand-off to CJ, and the rolls left. Wark releases on the play-action and hauls the pass for a short gain. If not for a good tackle by the defender, this could have been a first down. Although this isn't a big gainer, it was a good call against a blitzing defense and could pay dividends down the road by making them less aggressive. Also noteworthy, this is the exact throw that Maynard missed the previous week for a would-be TD.

Cal sets up for a crucial 3rd and 3. We're back with our 11 personnel, 1 tailback and 1 tight ends. OSU appears to be in a cover one zone with only one safety playing in the middle of the field. Because we have 3WR (one not pictured at the very top of the screen), the Buckeyes defense is spread out to match-up. 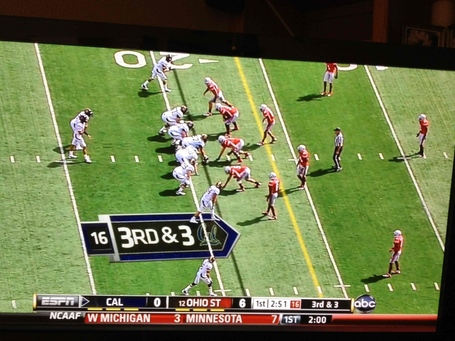 Pre-snap, CJ Anderson goes in motion and lines up as an additional receiver. This forces the OSU safety to shade towards the top of Cal formation. One of the Buckeye linebackers moves up towards the line and threatens to blitz. 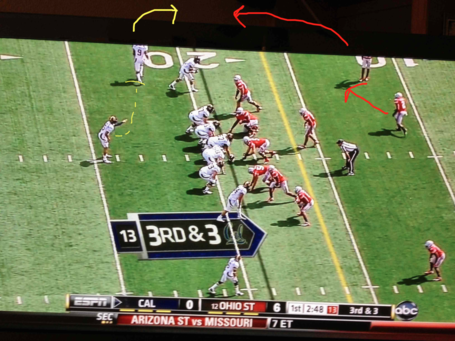 At the snap, Maynard immediately looks towards CJ. Could it be that tailback along the sidelines route which everyone has scouted and successfully defended for the past two years? Maynard's eyes holds the Buckeye safety. Meanwhile, Tyndall(RT) is executing a perfect cut-block on the blitzing OSU linebacker. 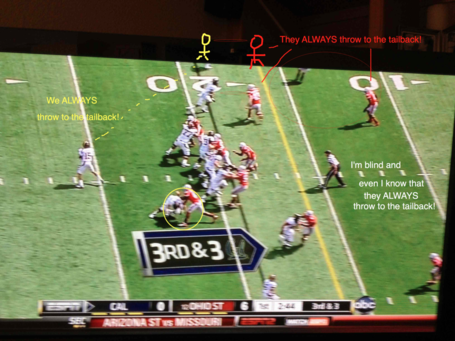 Maynard looks away from CJ. It's a trap! With his throwing lane clear thanks to Tyndall's cut-block, Zach has Chris Harper open on the slip screen. Wark and Adcock have their men locked up. Schwenke gets free into the 2nd level and shows great hustle to get ahead of Harper. The OSU safety is still out of position... 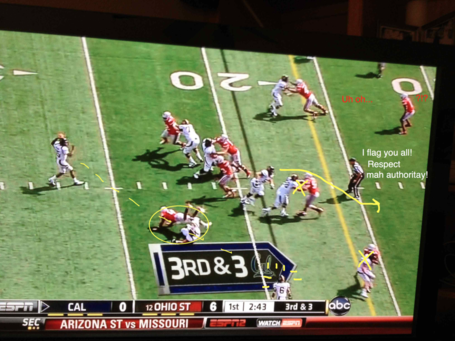 Wark and Adcock go Beast Mode on their men. Schwenke forces the OSU corner to make a lunge towards the middle of the field. Meanwhile, the Buckeyes' safety is trying to get an angle on the play. 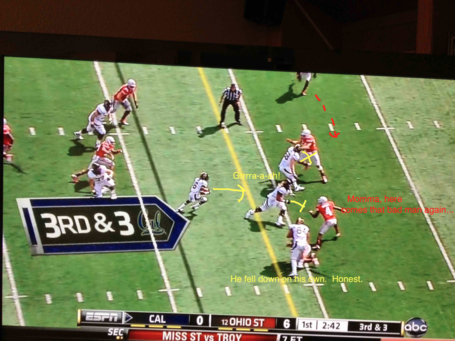 Harper shows off his vision and makes a great cut. Having forced their corner out of the way, Schwenke isn't done yet. He draws a bead on their late-arriving safety. 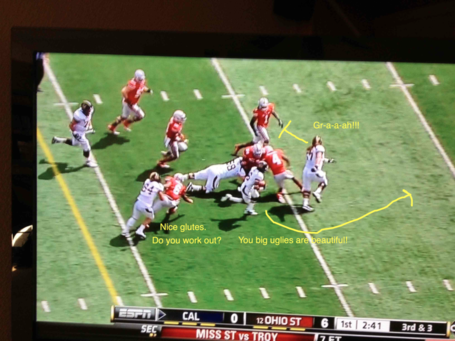 It's no pancake, but the OSU safety gets a definite love tap as his reward for being out of position. Harper cruises untouched into the endzone for his 2nd career touchdown and a much needed score. 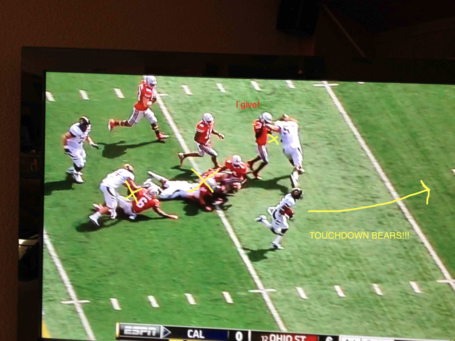 There was nothing fancy or "creative" about this drive. It was tough running, accurate passing, and a good mix of playcalls that left the defenders on their heels. Best of all, this was good execution by the entire offensive unit. If this is the new Tedford offense that we've been waiting to see, it certainly works for me. Go Bears!