With the advent of the Pac-12 Network (which if you are not lucky enough to get right now, hopefully you can get in the near future), the most exciting side-effect is the availability on TV of all the great Cal Olympic Sports. Volleyball, one of the charter sport of the Pac-12 - so there is participation and true round robin schedule from all 12 schools, has also been a sport historically dominated by the Pac-# (particularly the original Pac-8 members). With the Pac-12 conference season for Volleyball starting for the Bears on Wednesday night (7 PM PT @ Stanford), it's time to talk a little bit about Volleyball.

Cal Volleyball has been trending up in the last 10 years, all under Coach Rich Feller - from just barely making it to the NCAA tournament to winning the Pac-10 (see video above) and be a national title contender for multiple years. Early last year, Cal Volleyball achieved a program first by achieving the #1 ranking.

After the jump, learn a bit about volleyball rules and the 2012 Cal Volleyball team.

Disclaimer: despite being the resident Cal Volleyball fan, I have never played any volleyball outside of middle and high school PE class. I did (attempt to) call some high school volleyball games for my high school's radio station that had basically no listener and gradually learned about volleyball from the large number of Cal Volleyball matches attended during the beginning of the rise of the program.

NCAA volleyball utilizes rally scoring, which may be slightly different than the volleyball that you may remember from middle school PE class. A point is rewarded to a team regardless of who served and a "set" (the first 4 sets of a match at least) is rewarded to the team that get to 25 points first AND win by at least 2. If the match is tied at 2 a piece after 4 sets, a tiebreaking 5th set is playing to 15 with the same win by at least 2 requirement. The first team to win 3 sets, has won the match.

Each teams consists of 6 players, with 3 in the front court (inside the 3 meter line) and 3 in the back court. A side has 3 contacts to get the ball over the net, although the first contact by would be blockers is NOT considered a hit. Generally, the 3 contacts are a "pass" by the defensive specialist to the setter who then "set" the ball to an attacker. The third and final contact is the spike that will try to find the floor inside the boundary on the other side for a "kill". 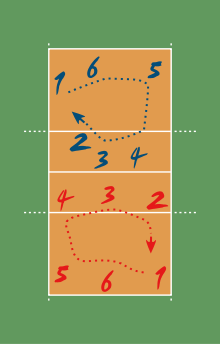 Other than the front and back court, the distinction of the various spot is disguised in college volleyball by the players' starting position. On occasion, a team may commits the really mindless mistake of being "out of rotation", an automatic point to the opposing (generally serving) team.

Player in the back court cannot move up and try to spike the ball at the net, she is restrict to back row attack only.

There are 5 main positions in volleyball. This is also the opportunity to introduce the 2012 team.

Here is how wikipedia describe it:

The libero is a player specialized in defensive skills: the libero must wear a contrasting jersey color from his or her teammates and cannot block or attack the ball when it is entirely above net height. When the ball is not in play, the libero can replace any back-row player, without prior notice to the officials. This replacement does not count against the substitution limit each team is allowed per set, although the libero may be replaced only by the player whom he or she replaced.

Libero is the one player wearing drastically different color jersey (2012 rule change now requires the libero to wear one color only). For Cal, the regular (but currently injured) lIberto Robin Rostratter (top) also stands out by wearing a TaeKwonDo helmet to protect her head from contact with other players and/or the floor when she dives courageously to the floor to dig up or pancake the ball. The current libero for the team is freshman Mary McKennon (bottom). Rostratter's absence also means that the Bears only have one Defensive Specialists (DS) in Marlee Davis, which explains a lot of the current poor passing.

The QB of the team, the setter control the flow of the attack by generally getting the 2nd touch. On occasion, the setter will try to surprise the opposing team by "dumping" the ball over and go for the kill herself.

With Elly Barrett graduating early (got her degree in 3 years!), Cal has a new starting setter for the second consecutive year. USF transfer Joan Caloiaro has beaten out Sophomore setter Lindsey Parrot as the starter. While neither are obvious playing at the level of former Cal great, Carli Lloyd, Caloiaro looks to play at about the same level as Barrett last year (good at times but also maddening inconsistent at times).

Theses are the players that can do quick attacks right by the setter and/or on the case of over passes by the opposing team (passes that get over the net). Blocking in volleyball is quite an intricate thing with various strategy as to how many blockers to send and where.

Redshirt Senior Shannon Hawari (top) is the longest tenured Bear on the team. Finally healthy, Hawari and Senior Kat Brown (bottom) form the main combo for the Bears down the middle.

The outside hitter is usually the most consistent hitter on the team and gets the most sets.

After losing All American Tarah Murrey to graduation, the Bears now depend greatly on Adrienne Gehan (top) to take over the load as the main attacker. Gehan was on the verge of a break out season last year prior to suffering an injury toward the beginning of the conference season. Her injury coincided with the Bears' fall from the No.1 ranking last year. Also in the mix is new comer Nikki Gombar (bottom) who came to Cal from Italy (Gombar is half Italian, half American). Due to the Bears being shorthanded so far this year, Gombar has been pressed into pretty heavy load of action right away.

Opposite (right side hitter):

This is basically the other front row attacking player to give the setter another option (or act as the decoy). Sometimes, there isn't really any distinction between the OH and the OPP.

Correy Johnson (top) has been injured and held out for most of the Bears' preconference games so far. When healthy, Johnson was an All American honorable mention in her sophomore season. Christina Higgins (bottom) had a lot of experience playing as a freshman last year. Despite her athleticism, her play is still somewhat inconsistent at time. Of course, that's what people said about Tarah Murrey for Murrey's first two season with the Bears before she upped her game to become an All-American. Higgins definitely has that ability.

Bears run the pretty standard 5-1 offense. Here is how wikipedia describe this:

The big advantage of this system is that the setter always has 3 hitters to vary sets with. If the setter does this well, the opponent's middle blocker may not have enough time to block with the outside blocker, increasing the chance for the attacking team to make a point.

Without being on TV much so far, it is a little bit hard to get a very good read on this year's team. Picked to finish 6th in the conference, the Bears started the season being ranked before dropping out of the top 25 for the first time since 2002 after suffering losses on the road to San Diego State, USF twice (once in neutral location of Hawaii), and Baylor (in neutral court). The Bears did score a surprising 5 set upset over Hawaii @ Hawaii (watch it here).

Pac-12 conference is by far the toughest volleyball conference in the land consistently, however. The currently ranked Pac-12 teams in the top 25 are: No.1 and defending National Champions UCLA, No. 2 USC, No.5 Washington, No. 6 Stanford, and No. 8 Oregon. Oregon State currently sits at No. 26 spot.

Injuries (to MH/OH Correy Johnson early in the year, libero Robin Rostratter) and inexperience (new starter setter in transfer Joan Caloiaro and freshmen OH Nikki Gombar and current starting libero Mary McKennon) have plagued the Bears so far this season, but it is still plausible for the Bears to gel and get better in a hurry. JR Adrien Gehan was on path to greatness before an injury derailed her development last year (she wasn't quite the same after she came back), SO Christina Higgins can also become very consistent all of the sudden. If/when Rosttrater gets back, the Bears will be back to having two extra defensive specialists in McKennon and Marlee Davis (after Erin Freeman left the team at the last minute). If healthy, the talent is definitely there for the Bears to score at least a few good upset wins.

With relatively low expectation for the season now (despite the numerous seniors, 4, on the team), it would be interesting to see how much the Bears may overachieve this season and return not just to the top 25 but also cause some havoc comes NCAA tournament time. Maybe all it takes is just some health (especially to Rostratter) to bring the team back to that lofty level of being the national championship contender where Cal Volleyball has been the past few years. It would be amazing if the Bears can somehow find itself advancing to the final 16 and play at home in the Berkeley regional.