Cal Vs. Ohio State Roundtable: Jeff Tedford And 4th And 1

Share All sharing options for: Cal Vs. Ohio State Roundtable: Jeff Tedford And 4th And 1

Norcalnick: It has to be discussed. The facts: Facing a 4th and 1 from the Ohio St. 25 yardline with the game tied and 4:25 left on the clock, Jeff Tedford elected to attempt a field goal. Vince D'Amato badly hooked the 42 yarder. Ohio St. took possession at the 25, quickly scored a touchdown and eventually won the game.

The question: Does anybody strongly believe that it was the right decision to attempt a field goal in that situation?

Ohio Bear: I facepalmed. OMG. Why run him out there for the sure miss. Why? Why? Why?

HydroTech: Yeah. I would have gone for the 4th down conversion instead of the field goal. When your kicker is 0/2, he's probably lacking some confidence. We were getting yardage with our runs. Why not just run it?

I'm a big Tedford supporter but even I disagree with that decision. Just about killed me to see us kicking the field goal. Everyone in the stands at the game wasn't happy with the field goal decision either.

Berkelium97: We were doomed. We were 0/2 on field goals and 0/2 on first downs. No matter what happens, we're trying something that has so far been unsuccessful.

atomsareenough: You mean 0/2 on 4th downs? One of those was a good play; it would have been converted if CJ Anderson hadn't dropped a very catchable pass.

Besides, that doesn't change the math that says we have a 60ish% chance of converting. If you flip a coin twice and come up with heads both times, that doesn't mean the odds of getting tails the third time is any different.

Our yards/carry for the running backs had to have been pretty good too. Going for it made all sorts of sense.

Berkelium97: I wanted to go for it on 4th down, but I understand why Tedford went for the field goal. If I can play Devil's Advocate for a moment: Okay, great. D'Amato was 2/2 from the 40-yard range heading into Saturday's game. He missed the first kick by a mile, missed the second one narrowly. Given that Vince had made two from that range in previous games and his second miss was closer than the first, there is some reason to believe he may have made the kick. Since we had already failed two 4th down conversions, Tedford may have thought kicking was the better option. Obviously, that wasn't the case.

Again, I would have made a different decision, but I can understand why Tedford went for it.

I would also like to point out that we passed the opportunity to try two fourth-down conversions last week. We had a 4th and 2 and a 4th and short on the goal line. Why we did not take advantage of these opportunities is a complete mystery; instead of going for it in a low-pressure situation, we opted to punt/kick.

I'm not saying that we would have converted if we tried them last week, but it may have put us in a situation where we could have made a better decision on Saturday.

Norcalnick: The cons of a failure are the same: Ohio St. has the ball with the game tied in the vicinity of the 25 yard line.

The only variable is the chance of success. I think the odds that Cal converts a 4th and 1 are meaningfully higher than the odds of Cal converting a 42 yard field goal.

To illustrate, here's a chart created by MGoBlog's Mathlete (you should read his entire post): 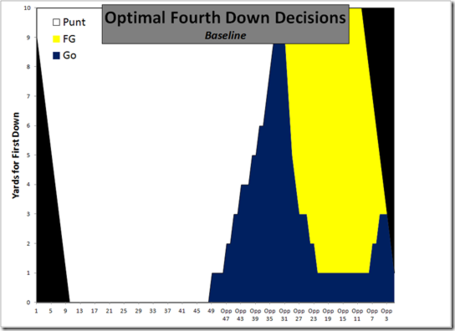 This chart is scaled for a team with an average offense, defense and field goal kicker. The chart says go for it. But I would argue that Cal (in this individual game) had an above average offense and a below average kicker, which would only increase the rightness of going for it.

The 4th down calculator (try it out yourself!) he created confirms as much, no matter how you switch around the variables of our offense, defense and field goal kicking.

unclesam22: I think it's a defensible move to go for the FG, but ultimately the wrong one given the circumstances. On the road, tied late and driving against a heavily favored team, I think you have to go for it. D'Amato hadn't shown that he was money or anything, so it was much more of a gamble than Giorgio would have been. Not that the Oline was blocking amazingly well either, but I think you call a timeout, get your team over to the sideline and fire them up, and then send them out there to finish the job and win the game.

I think we'll all probably agree that Tedford should have gone for it, so my next question is, what play do you call there? Our Oline was getting no push in the middle so it's not like you can just bang it through and a QB sneak doesn't seem like sure thing either, since that barely worked on the first TD. I think a QB read option or bring Bigelow in and make them think about him and then run the same play tOSU ran on the touchdown earlier where you fake the QB dive up the middle and release the TE for a quick pass. What do you think?

Vincent S: Not much more I can say. I did feel with Stevens was stuffed on 3rd and 2 that we were done. Had we converted on either of our previous 4th down tries, I think Tedford goes for it, no question. I imagine his thought process went something along the lines of:

- Failed 2 4th down conversions
- Failed 2 FGs
- If we go for it and make it, we still might not score
- If we kick and make it, my defense gets fired up to protect the win
- KICK!
Avinash: Upon further review, the leadup to the 4th down call I found more questionable. I honestly was more annoyed with the 3rd down playcall to run with the fullback. I like Stevens as a change-option, but I'd rather see him lead-block for Anderson or Sofele and get one extra pusher on the line. Putting him right up against Ohio State's nose guard was probably unwise in an obvious running situation.

And that timeout. Why did we not even line up on offense and call a timeout? Why'd we make D'Amato wait 40 seconds and think about that field goal even more? So bizarre.

I'm not going to fault the coach for trying to take the lead in a tied game, even if the kicker has struggled. Ifhe makes it, that really super-charges the team, gives the kicker confidence, and the defense is now pumped to be playing the lead. You're ahead and you put the defense in a "score or else" mentality with four minutes left, particularly with a quarterback who has struggeld with accuracy issues. If he misses it, at worst the defense will have 70+ yards to defend (seriously, we gave up a 72 yard touchdown pass with three minutes left. You don't plan for that).
It turned out to be a decision that didn't work out, but I didn't think it cost us the game.

LeonPowe: Going for the field goal on that down distance and situation is defensible - if we had Giorgio or Fredrickson or Doug Brien or any other Cal kicker of the last two decades. I think a shaky D'Amato - especially after missing twice - badly - makes you really think about rolling that two RB option look out there. Or the swing to the fullback (glad to see that back in the offense by the way).
I think in the abstract I'm fine with the decision. I think in the specific, I wish we had gone for it.
ragnarok: That's my take too -- 4th down, late in the game, makeable field goal distance, you try and kick the field goal to take the lead. Now, if you don't trust your kicker from beyond 40 yards, then maybe it's a go-for-it situation, so really what I'm hearing from this crowd is that Tedford shouldn't have trusted his kicker after 2 earlier misses.
Vincent S: Hypothetical question to y'all:
What would you have called on that 3rd-and-2?
I would've put Bigelow in (the Ohio State defenders were giving him Desean Jackson treatment at that point) and either faked a toss + QB Keeper/FB Dive, or run Bigelow-to-Allen reverse. I would also have not objected to a fake FG play, assuming we have one in our playbook.

LeonPowe: It may be predictable - but I miss this play from Tedford's playbook (we haven't been running it as much lately) - and I think we ran it when we got the ball back, but 3rd and 2? Fake fullback dive, pitch to the running back running the counter. And I'd want that running back to be Bigelow.
atomsareenough: Also, for a 3rd or 4th down play, the 3rd and 1 play that Stanford called against USC tonight late in the game was pretty nifty. I formation, bunched tightly, looks like it's going to be up the gut or a sneak, defense is bunched tightly in the middle, but instead they call a toss sweep with the RB.