Taking a Turn for the Ohio: Cal at Ohio State Game Thread

Share All sharing options for: Taking a Turn for the Ohio: Cal at Ohio State Game Thread

To discuss all the first quarter action, please click here!

To discuss all the second quarter action, please click here!

To discuss all the halftime/third quarter action, please click here!

To discuss all the fourth quarter action, please click here!

Today, the California Golden Bears step up to the big time in a big way: the Bears are in Columbus, Ohio, in one of college football's most storied venues to take on one of the legaciest of the legacy programs in college football. (Yes, I just made up a word there. Today's game is that big of an occasion!)

When this game first appeared on Cal's future schedules over a decade ago, I looked forward to it. Sure, I thought it would be great to have our beloved Bears travel to The Big Horseshoe. But I figured it would be the same ol' same ol' once that day came: Ohio State would be a national power and Cal would be...Cal as it ever was. Then, as the Jeff Tedford years began to unfold, I looked more and more forward to that day when Cal would come to Columbus. As Tedford turned the Cal program into one with bowl appearances, national rankings, and actual expectations of success, the prospect of winning in Columbus someday was...real. There were daydreams of scenarios where the Cal-Ohio State game on September 15, 2012, would be a marquee matchup with true national implications.

The last couple of years (or more, in the minds of more than few Golden Bear fans), not to mention Cal's first two games of the 2012 season, have more than tempered the expectation that Cal can come into Ohio Stadium and walk out with a victory. The 12th-ranked Buckeyes (2-0), under first-year head coach Urban Meyer, are tough as usual at home --- Ohio State has not lost a home game to an unranked nonconference opponent since 1982 --- and unranked Cal (1-1) has struggled to find consistency this year, last year, the year before, and the year before. The Bears come in as a decided underdog, with little expectation in the national conversation that they can win today's game.

There is good news for the Bears, however: they don't play the games on paper. And Ohio State's grand tradition and venerable venue do not count for extra points on the scoreboard in the Buckeyes' favor (not literally anyway). Though the Bears have not looked good in either of their first two games this season, they could do more than turn around the perception of their season's prospects by playing well today. And a win would most certainly do wonders for Cal's confidence, not to mention the perceived strength of a Pac-12 conference that has already picked up some unexpected victories over nonconference opponents.

This is your official game thread for today's action. Use this post as your pregame thread. Get out your pregame tensions and smack talk in the comments. Watch for the link to the first quarter thread as kickoff nears. If you get lost somewhere along the way, come on back to this post, as links to each quarter thread will be posted here.

Today's meeting, the first of a home-and-home series between the two schools (Ohio State will visit Berkeley next season), marks the first time the schools' football programs have played one another since 1972. That day, Ohio State defeated Cal 35-18 in Berkeley. Overall, Ohio State leads the series over Cal, 5-1. Cal's lone win over Ohio State came on January 1, 1920, when the Bears defeated the Buckeyes 28-0 in the Rose Bowl Game.

As for today's game, Cal will have its hands full on both sides of the ball. ManBearCal previewed the Ohio State offense earlier this week, giving us a detailed breakdown of what Clancy Pendergast's defense is up against. The key to how Cal does today is how the defense does against OSU quarterback Braxton Miller. Miller is a talented athlete who is very adept at running the ball. Yeah, I know what you're thinking: A RUNNING QUARTERBACK! OH NOES! ManBearCal had a similar take on Miller:

What to Expect: Potentially severe embarrassment, if the Nevada game was any indication. While our 3-4 defense is geared towards stopping the run (in theory), offenses that utilize the quarterback as a running threat scare the shit out of me, and Braxton Miller makes Cody Fajardo look about as mobile as post ankle injury Nate Longshore. With Miller being as dangerous as he is, this is not a game where we should employ the scrape-exchange defense of the zone read. I repeat: THIS IS NOT THE GAME TO EMPLOY THE SCRAPE-EXCHANGE DEFENSE. The last thing I want to see is our faster, more athletic OLB's crashing the line while our less mobile inside backers try to take on Braxton miller in space. If there can be any bright side whatsoever, it's that Miller appears to BE the Buckeye offense at this point. They key to stopping them...is stopping him. That's not gonna be easy to do though. And I have little faith that we'll be up to the task. We could certainly try to employ the spy tactic where we assign a safety to shadow Miller at all times. I'd guess the guy would be Josh Hill. That will put additional prssure on the other members of our secondary to stay disciplined and tight in coverage...something they haven't been able to do thus far in 2012. And it puts a ton of pressure on Hill to make tackles in psace on a very slippery guy. Still, going with a zone 2 coverage would be the proper tactic since the bulk of Miller's passes are on short and intermediate routes.

As for how the Cal offense might fare today, norcalnick previewed the Ohio State defense and broke down what a difficult task lies ahead of the Golden Bear offense. His conclusion:

It's simplistic to say that Cal's offensive performance will come down to how they do against Ohio St.'s star defensive line duo. The Buckeyes clearly have other talented players who can make plays. But if Cal fails to contain Simon and Hankins, I wouldn't expect much of anything else to matter. We all saw what happened in the Holiday Bowl when Texas claimed squatter's rights in Cal's backfield. I'm terrified that we'll see a replay of that on Saturday.

If . . . IF the offensive line can create enough space for the running game to keep the defense honest, and IF they give Maynard a decent amount of time, and IF good-Maynard-vs.-Stanford-and-ASU shows up, I think there's a possibility of a big game through the air. A sophomore conference USA quarterback making his 2nd career start managed to complete 60% of his passes. I would like to think that therefore, a senior QB with a likely first round draft pick wide receiver could potentially make some plays.

But how many points would Cal need to produce to top what Braxton Miller's unit is likely to put up? 31? 38? ManBearCal's preview of the Ohio St. offense probably didn't leave you feeling wonderfully optimistic. Lots of individual matchups on both sides of the ball that look to lean in Ohio St.'s direction are going to have to go Cal's way to pull the upset. I can't say that it seems very likely, but hey, that's why we watch, right?

Yes, indeed, that is why we watch. These games aren't played on paper. They are played on the field. And even though there will be more than 100,000 Ohio State fanatics in the stands making noise for the Buckeyes and against the Bears, you just never know. At least, that's my story and I'm sticking to it. 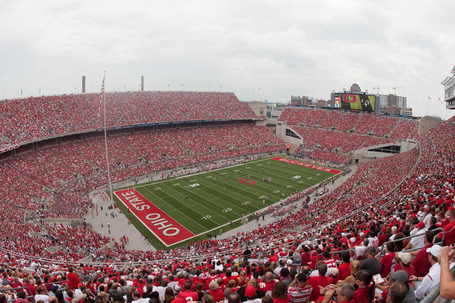