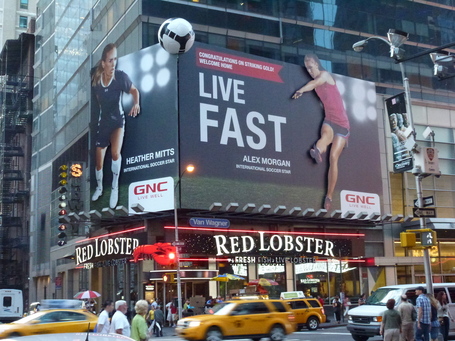 When I was in NYC last weekend, I saw this Alex Morgan billboard about one block away from Time Squares. It's unfortunate that she is wearing red and her face is not as identifiable as that of Heather Mitts (the ad campaign is clearly going for the best Soccer player).

Part 2 of the Cal Olympics Sports on TV/web triple-header is Cal Women's Soccer on the Pac-12 Network. After a tough double overtime win over UC Davis (Lauren Battung with the Golden Goal) on the road last week, the 5-2 Bears return home to host the Quakers of Penn (2-2). The Bears play a fairly fast paced offense and currently lead the Pac-12 in scoring with 19 goals and first in shots 18.29 per game, so soccer fans should try to check out this year's Cal team in action.

Cal Athletics recently posted an article asking the Golden Bears why they chose their numbers. Here are some excerpts:

No. 0 Lauren Hein -
It's the number of goals I plan to allow in each game.

That's probably not that hard to do, since she is the backup goalie behind number 00 Emily Kruger for most games.

No. 10 Betsy Hassett -
I didn't get a choice. But I wear No. 12 when I play with the New Zealand national team!

Somewhat surprising that she didn't choose it since "10" is generally the most coveted number in soccer for a playmaker.

No. 11 Sandra Ley -
There are only 11 spots on the field. I want to be a part of the starting 11 and make that difference.

and a slew of players who claimed that they didn't get the choice.

Cal Women's Soccer were the first Cal team to break through with a win on the Pac-12 networks (which is currently ongoing with Wins from Cal Football and Men's Soccer, when you don't count the Cal Volleyball exhibition since it was merely an exhibition).