An Ohio State University? A Q & A with Luke Zimmermann of Land-Grant Holyland

Share All sharing options for: An Ohio State University? A Q & A with Luke Zimmermann of Land-Grant Holyland

Hello, and welcome to part three of our twelve-part series, "Better Know Thy Enemy"! Who are the Ohio State Buckeyes? Who is this "Urban Meyer" fellow, and why is he important? Today, we talk to Luke Zimmermann of Land-Grant Holyland. Luke was gracious enough to answer a few questions for us; head over to Land-Grant Holyland and express your thanks!

Luke's answers after the jump. 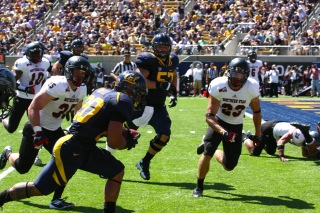 Isi Sofele and the running back corps will have to have a monster day for Cal to win.

1. How has the offense changed under the Meyer regime?

How much time do you have? Ohio State's gone from an offense that snapped on one every down and had less personality than the coaches behind it to one as cut throat as all the negative stereotypes about Urban Meyer go. Call it a veer run/spread passing smorgasbord or whatever you want, but between Urban Meyer's schematic philosophies and Tom Herman's hurry up, this is a true offensive renaissance for Buckeye fans.

2. How would you characterize the defense under the Meyer regime?

Vintage 2011 outstanding mediocrity (at least by Ohio State's lofty standards). Schematically, it's not a ton different. They've played some Cover 4 and done some different things with the safeties they wouldn't have done previously (see: Everett Withers, UNC's former interim coach/DC turned Ohio State co-DC and secondary coach). All-everything Buckeye versatile lineman John Simon's been neutered by double and triple teams early on, prospective top 10 defensive tackle Johnathan Hankins has been forced into an edge rusher by the injuries of others, and inconsistency and inexperience have rendered a defensive line Buckeye faithful were calling "the best in America" before the season into a middle of the pack one. Talent-wise, they're still there; whether they can evolve into what many of us thought they'd be remains to be seen. The linebackers are sink or swim. Ryan Shazier is a future star, but he's not all-beast mode all the time just quite yet.

3. Has Braxton Miller improved at all as a passer under Meyer's tutelage?

His mechanics under OC/QB coach Tom Herman's tutelage feel a bit crisper. He's made booming long passes and short to more intermediate ones a like, but other times it still feels like nerves are a factor. Meyer's missed guys just barely on receptions that could've led to huge plays. Conveniently he has these magic legs that sort of negate the sometimes inconsistencies in the mid-range passing game.

4. This summer the Cal-tOSU matchup was described as a game the Buckeyes will win simply by rolling out of bed in the morning and showing up. Is this the prevailing opinion among Ohio State fans?

The thing about Ohio State fans is that they expect to simply roll out of bed and win every game they play ever. Even during last year's chaotic season, their were bloggers and more full-time-ish writers alike that thought 10+ wins were possible. As far as this particular contest goes, particularly given Vegas' thoughts on the matter, I think most of the Ohio State devotees are feeling pretty good about it. 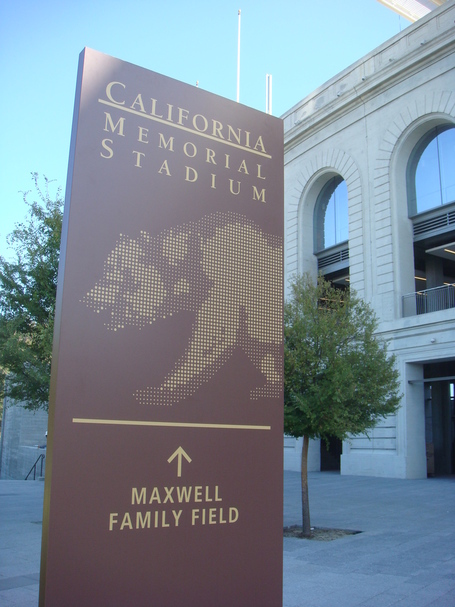 Ohio State will play at California Memorial Stadium in the return game of our home-and-home series in 2013.

5. How is the adjustment with Luke Fickell still on staff?

I don't think it's been an issue at all. Luke's a Buckeye lifer having starred for the school then coached there for almost his entire career. He's young enough to know he still has much to learn before he's an effective head coach. And I bet he's feeling pretty good that he was one of the runner ups for that Pitt job right about now.

6. When I'm wearing a blue and gold shirt that's says "Cal" or "California" on it in Central Ohio, why is it that some people don't bother to read the shirt before peppering me with Michigan taunts or jokes?

On game days, Brian Cook's rumors of poop coolers and felony assaults are greatly exaggerated. You have just as much chance of running into an oversauced and/or logo blinded douchenozzle in Columbus as you do at Autzen or outside the Coliseum. Any other time, well, people are myopic and/or love being intellectually lazy with respect to their trash talk/over generalizations. I had a guy at a taco shop in Washington D.C. (cognitive dissonance, I know) see me in a Houston Texans shirt and ask me if I was from Austin. That or everyone east of the Mississippi is farsighted.

7. The Big Ten recently announced that Ohio State can win the Leaders Division (and presumably a shiny trophy) even though it is ineligible to play in the BIG's championship game. Big deal to the team and fan base or meh?

I'm sure Urban will use it as a motivational tactic (as 18-22 year olds like shiny things), but other than superficially, I'd be hard pressed to imagine the fans care one way or the other without a Big Ten Championship game and/or BCS shot afterwards.

Other than blanket cliche disdain for SC and a weird insecurity Oregon will skate for their involvement with Willie Lyles, I'm not sure Buckeyes have much of an opinion on the Pac-12 as a whole. I'm sure plenty would love for the Big Ten to win a Rose Bowl more than once a decade. 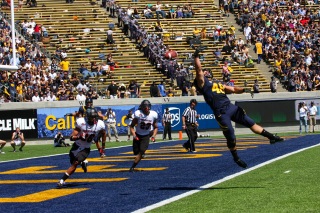 Will Maynard be able to throw more accurately this week? Cal's fate on Saturday depends on it.

9. If you were scouting the Ohio State defense, what would you identify as the area must vulnerable to attack?

The secondary. For all their talent, they're wildly inconsistent. It was the Buckeyes' greatest weakness in 2011 and there have been plenty of flashes that the evil personality of that same core four is still around. They also aren't the deepest team in the world, so if Cal can throw early, often, and quickly and perhaps make cramps/conditioning/injury an issue, that might play to their advantage.

The crowd loves hits, man. The class of '65 didn't know what'd hit them. Bruce Springsteen's even covered it and well, if it's good enough for The Boss...

Nick Lachey. He joined Desmond Howard on the roof of the Horseshoe to sing Hail to the Victors before the 2005 Texas game. While Desmond's too dumb to know better, Lachey's a native Ohioan. Whatever Bradley Manning's been accused of, Lachey committed a far greater act of lèse-majesté and deserves a fate far worse.