After the huge commitment of Jabari Bird, the Golden Bears kept the recruiting momentum going with the addition of another top-100 prospect in shooting guard Jordan Mathews (Santa Monica HS, California). While Jordan's commitment might not be as program-changing as Bird's, it is still a significant addition to the 2013 class, giving Mike Montgomery another versatile, highly touted scorer.

After the jump, we'll take a closer look at this commitment, examining what Mathews will bring to what is shaping up to be a potential powerful squad as well as the recruiting ramifications of his addition. 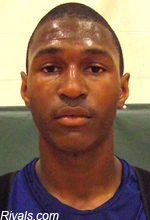 You can check out some of Jordan's highlights and interview snippets from BearTerritory.net.

The first thing that stands out is Mathews' shooting ability. Possessing a silky smooth stroke, Jordan should give Cal a premiere perimeter threat. As detailed by Jim McGill of BearInsider.com:

"I think his strength is his shooting right now...His mid-range is good, with a nice pullup jumper. His 3-point shot is nice," [claims Santa Monica head coach James Hecht]...

"[Montgomery] likes to run if they've got the personnel for it but if they need to run some halfcourt sets to score points, he can do that, too. He gets his shooters a lot of good looks. Since I'm a shooter, that really appeals to me," [said Mathews].

Though Mathews is a potent shooter, his game is by no means one-dimensional. The Santa Monica guard possesses good speed and strength, allowing him to get by his defenders on a consistent basis. Very competitive, Jordan isn't afraid of frequently attacking the rim.

Though he is known primarily as a scorer, Mathews has the potential to be a very good defensive player and a plus rebounder for his size. Nobody will outwork the pesky son of former UCLA assistant coach Phil Mathews, and his terrific motor really has the potential to take his defensive game to the next level. Last season, Jordan averaged 2.66 steals/game and 7.5 rebounds per game for Santa Monica.

Mathews is a very intelligent player and the Bears plan on utilizing his versatile skills as a point guard, shooting guard, and small forward. Though at this point, Mathews definitely possesses the right mentality, moxy, and hoops IQ to excel at the point guard position, he must improve his ball handling skills to truly flourish there at the next level. However, Jordan seems fully aware of his need to improve in that area:

"Coach DeCuire would like to have me play a role as a scorer on their roster. He said I'm versatile enough to play either the 1, 2 or 3 if I need to...

"I'm going to be working hard on my ball-handling and also work on going right."

"My coach is always working on helping me to expand my game and get better."

"I know Jordan's up for the challenge at Cal," said Santa Monica head coach James Hecht. "When he came back to school today and we talked about it, the first thing he mentioned was trying to get better in certain areas in anticipation of helping Cal however he could to be as successful as possible.

"He's always working on his game and looks at the game on and off the court through a coach's eyes, being the son of a basketball coach."

Overall, Mathews gives the Bears a very skilled, very intelligent, and very hard working guard to mold into a successful college player. While it is yet to be seen whether or not Mathews will develop his point guard skills (which would take his overall game to the next level), you can depend on the promising guard to bring in a winning attitude and versatility to Berkeley. For lack of a better term (and trust me, I usually HATE this term), Jordan Mathews is a "gamer". (That's the final time you will see me use that word...ever.)

Jordan Mathews ultimately pledged to Cal because of his familiarity with the Bay Area and relationship with both the coaching staff and current players. As with Bird's commitment, the significance of Mathews' pledge extends beyond solely his addition to the team, as important as it might be. Mike Montgomery has two scholarships to work with, both of which will probably be given to bigs. With Aaron Gordon recently narrowing his finalists to Arizona, Washington, and Oregon, the Bears must look elsewhere. Well, Cal might not need to look much further than Mathews' AAU team, Cali Supreme. Two of the anchors on that squad, Torren Jones and Marcus Lee, are both heavily considering the Golden Bears. In fact, Jones recently listed Cal as a favorite, and Lee listed Cal amongst his impressive final three alongside Kentucky and Louisville. Cal is actually widely considered the favorite for Lee's services, and the addition of Mathews definitely couldn't hurt. The addition of Jones and Lee alongside Mathews and Bird would make for an extremely impressive 2013 recruiting class.

Can you say dominoes? In Bird and Mathews, the Golden Bears have added not only great players, but have also opened the door for more impressive players to also join the squad. This is shaping up to be the recruiting class Cal fans have been waiting for. Mike Montgomery coaching with this level of talent? The rest of the Pac-12 should be very, very scared of what's brewing in Berkeley.