Share All sharing options for: Fantasy Week in Review: Week 2

Well, at least our Bears won this week, and they actually managed to cover the line. (Checks the line.) Wait a minute, it was a pick'em? I guess even Vegas had no idea how to handicap our Bears since they were so bad in week 1.

Last week's top performer was Goooooooo Bears, who managed to jump all the way into fifth place by going 23/36 on the week. More details after the jump.

COLLEGE FANTASY FOOTBALL TIME
So, uh, I had forgotten that I set the draft to last Tuesday rather than last Wednesday. Imagine my surprise when I logged onto my team and found that I, well, already had one. (Whoops.) I did end up with a pretty nice team, tho.
Onto the week 1 results! 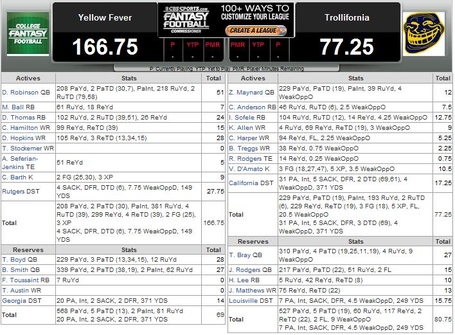 In the week's top ass-kicking, Yellow Fever crushed Trollifornia 166.75-77.25. Booya grandma! (/Stuart Scott voice.) My boy Denard Robinson rolled up 51 points (thank God I got him after that Alabama performance), and De'Anthony Thomas, DeAndre Hopkins, and the Rutgers D/ST put up at least 24 points each to layeth the smacketh down. As for Trollifornia, I admire your dedication to our Golden Bears, but, well...yeah. 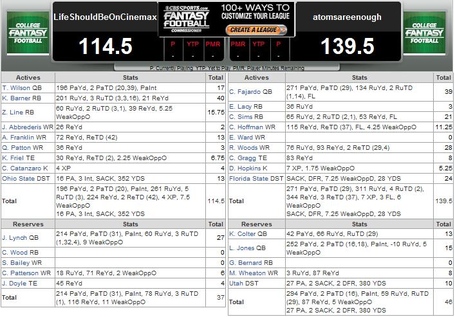 atomsareenough triumped over LifeShouldBeOnCinemax 139.5-114.5. (Great team name.) Atoms must have been inspired by our Bears' week one failings, as he tabbed Casey Fajardo to be his fearless leader and got 39 points from his efforts. Robert Woods also put up 28 points in USC's whitewashing of the Orange (that must have hurt our Syracuse alum a great deal), and the Florida State DST put the hurt on Savannah State before the weather put them out of their mercy. Meanwhile, Kenjon Barner rolled up 40 points for Skinemax, but didn't get enough help elsewhere to pull it out. 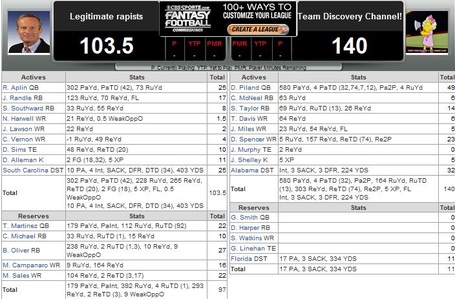 Team Discovery Channel put up a 140-103.5 victory on the strength of...D. Piland? Who? Either way, 580 passing yards and three touchdowns will help most of the time, and they did this time to the tune of 49 points. The Alabama DST also put up 32 points of their own, meaning they didn't need a great deal to hold off Legitimate rapists' (another great team name) motley crew of guys I've never heard of. 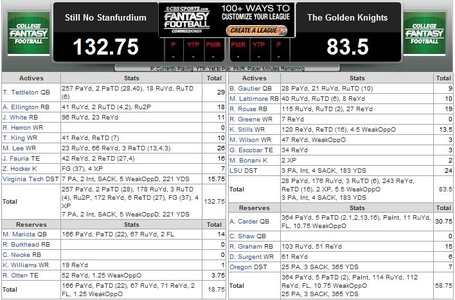 Still No Stanfurdium beat the Golden Knights (UCF? Wha?) 132.75-83.5 behind a balanced attack feature Tyler Tettleton, Andre Ellington, and Marqise Lee, while getting nothing from Robert Herron. Might want to check the injury updates a little more frequently. The Golden Knights were led by Robert Rouse and the criminally overrated Marcus Lattimore, along with the LSU D/ST's sterling performance over that team that pays coaches in boats. 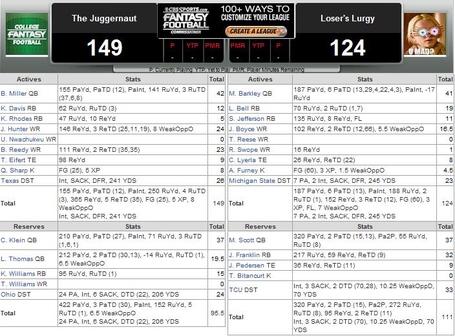 Loser's Lurgy kept on losing right into another year, as they lost 149-124 to The Juggernaut. The Juggernaut featured Braxton Miller piling up 42 points on his own, while getting a little help from his friends Justin Hunter, Bernard Reedy, and the Texas D/ST. Loser's Lurgy had Matt Barkley going off for 41 points, but got almost nothing from it's wide receivers or kicker to supplement reasonable performances from the Michigan State contingent of Le'Veon Bell its D/ST. Y'know, subbing in Johnathan Franklin and the TCU defense might have helped. I'm not sayin', just sayin'.