As I reviewed the tape from the Southern Utah game, I originally intended to analyze our standard read-option play, which was really uneven all day. But as I collected the footage, I noticed a much cooler, and more successful play. It's a read option out of the shotgun with two halfbacks!

We ran it four times, and averaged over 8 yards per attempt. We also ran a play-action off of it and scored a touchdown. In this post, I'll analyze the 20-yard gainer and include videos of the other three attempts at the end. In another post, I may take a look at the really successful play-action that it set up.

Sweet, right? One thing I noticed when I went through our offensive game plan against Southern Utah--we really didn't show much of our playbook. By my count, we ran this play 4 times, we ran a different version of the read option 5 or 6 times, and we ran a fake read-option play action swing pass 4 times. That's only three different plays for 14 downs!

Considering all those plays (either read-option or fake read-option play action), I also noticed something of a tell in our formation. Let's look at the pre-snap: 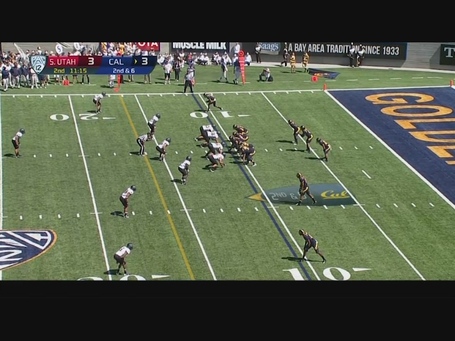 This is the first time we show this formation, but we will show the exact formation four more times in the game, running the same play all but one of those times (the exception being when we fake it and throw to Allen for a TD).

When I went through the tape looking for instances of our read-option, I found that the job was really easy because our option formation is different from any of our other formations. Here's what I looked for and found: 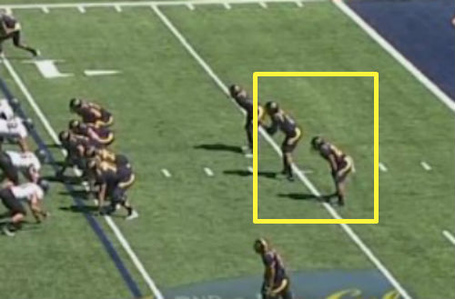 BUT WAIT! You might be thinking. If they can tell that you're going to run a read-option just by looking at where the RB is lined up, doesn't that give them an advantage?

I'm not so sure. Because we ran play-action fakes out of the same formation, it was sort of a coin-flip for the defense. If they go all out to prevent the read-option, they may get burned with the swing pass (and this happened several times, with WR Harper being the recipient of giant gains and one TD that got called back). 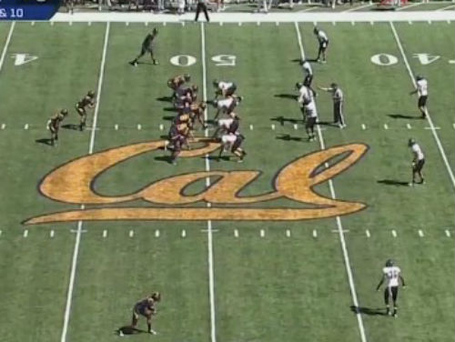 Notice the offset back? Yup. Read-option.

So what do we get out of this somewhat limiting formation? The HB has a better angle and can get some momentum going before reaching the QB mesh (the moment in which the QB holds the ball in the HB's stomach and decides whether to give or keep it).

But we're not going to talk about our standard read-option from the shotgun, we're going to look at its two-back variant. Usually, in a read-option, one player is left unblocked and the QB "reads" him and decides whether to give the ball to the halfback or to keep it.

First, let's see what the linemen do. 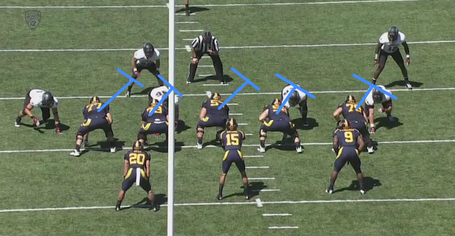 If this graphic seems a little vague, it's because the blocking scheme is kind of difficult to read. I think this is what they call "zone blocking" in which each lineman blocks a zone, rather than a pre-designated defender. You can see what I mean in the next picture: 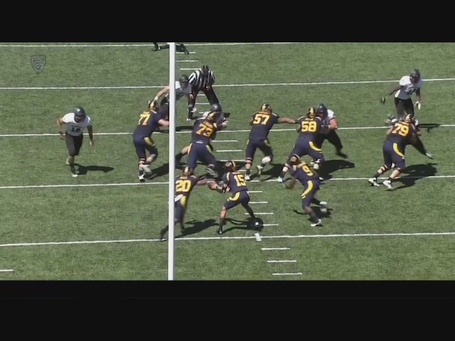 What's interesting here is the center's arm. Notice that he puts it on the RG's shoulder and makes a "Red Rover"-style fence. He'll keep his hand there as the two of them pivot like a gate. 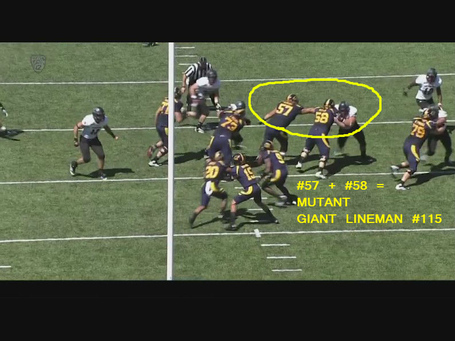 So why the arm? I imagine it makes the spacing between the C and the RG even as they make their push. Rather than jump out on the LB or double team the DT, the C stays right on the RG's shoulder, meaning that no one can get through their gap. I think that's pretty cool, and an obvious example of Coach M's influence.

Okay, back to the play. We noticed that the line is zone-blocking to the right. That leaves the DE unblocked, which looks like a classic zone-read, right?

Well check it out: 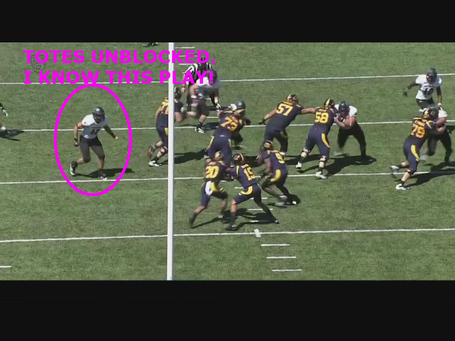 But wait, what's this? 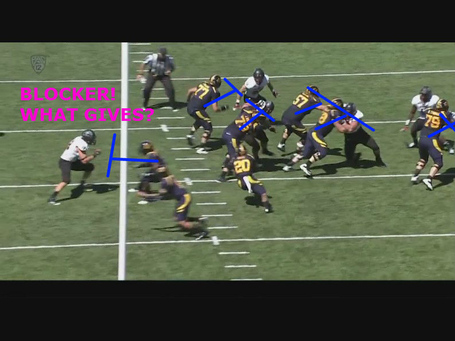 The other HB on the other side of the play blocks blocks the unblocked DE!

So, if the DE is accounted for, who is the QB reading? Is he reading anything? There are two possibilities, one which is kind of lame and one which is awesome, if run correctly.

OPTION #1: THE PLAY IS A DESIGNED GIVE. THERE IS NO OPTION.

The kind of lame possibility is that the play is just a designed give. We ran the play 4 times, and the QB gave it up 4 times. Since the DE is actually blocked out, there is no one to read. The WRs go out on routes, but that is only to keep the secondary honest for the possible play-action.

In that case, the play would look like this. 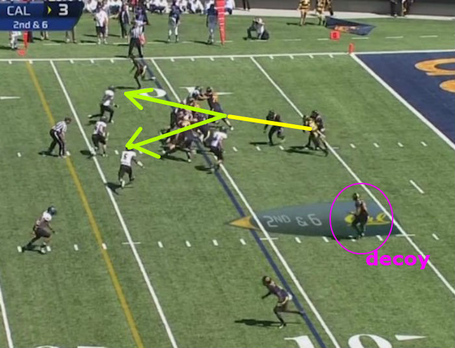 OPTION #2: THE PLAY IS A TRIPLE OPTION ZONE-READ. THE QB READS THE OLB AND SAFETY.

In this case, the QB is actually reading the defenders BEHIND the blocked DE. If this is the case, then the QB has the option to keep it or to swing it out on a pass to the WR. In which case, the play gets a whole lot more complicated. 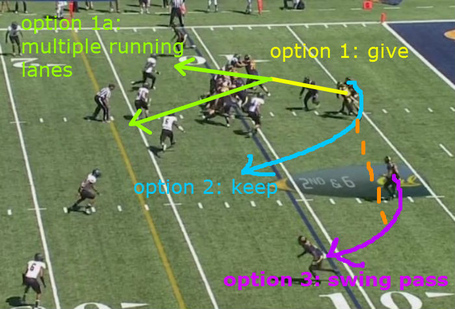 There is a lot of mystery here, since the four times this play was run, the ball always went to the RB. It's hard to determine what other options, if any, this play had. But there is a possibility that we see wrinkles in this later.

The evidence for the option to pass?

#1: The WR always takes a step back, thus being careful not to cross the line of scrimmage before he catches the (hypothetical) pass.

Why is this important? Because, according to college rules, if the pass does not cross the line of scrimmage, then the offensive line is free to block downfield (avoiding the ineligible receiver downfield penalty). I know, it seems like we don't give a honey badger about penalties, but I don't think our plays are designed to be illegal. Yet.

#2: The play-action pass we run out of this formation doesn't use the same WR pattern. If we're trying to set up the play-action, we should have the receivers run similar routes.

THEREFORE, I SUBMIT FOR THE DISCRETION OF THE DISTINGUISHED LADIES AND GENTLEMEN OF THE BLOG:

I just noticed that my post just ran an option about the option! meta. . .

WHY THIS PLAY WORK SO AWESOME?

The blocking was excellent, if borderline illegal. Check it out: 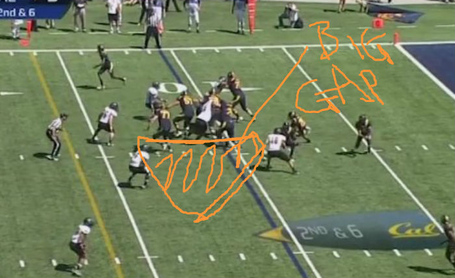 The RB doesn't have to guess at which running lane to choose. And then. . . 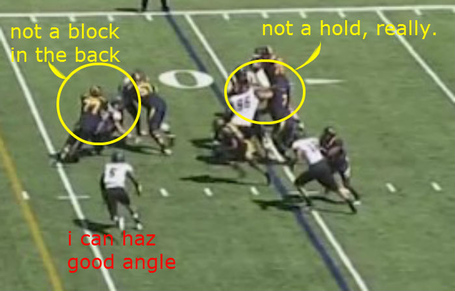 The blockers finish their blocks. #77 widens the gap with a questionable block. The RG makes sure that the DT can't get away. And the result is that the good angle that the OLB has. . . 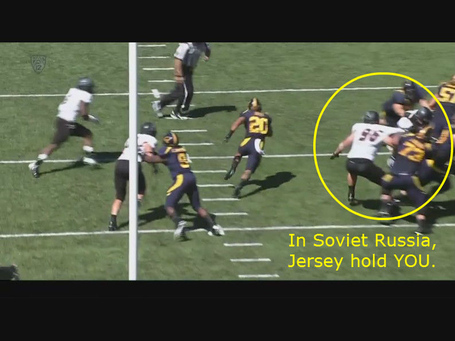 . . . turns out to be not good enough. Since the gap is widening due to #77's "block," the RB can run away from the OLB, and show that he's got an excellent burst. Check out this picture: 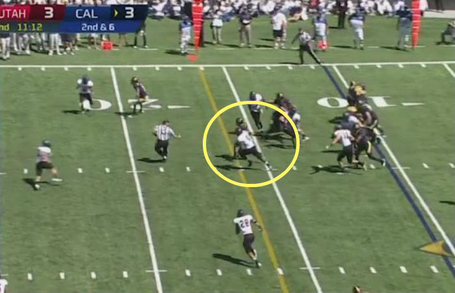 Usain who? Sofele blows past the LB, who can't even get a hand on him, even though he's only a few feet away.

1. The two-back variant of the zone-read was more effective than the standard zone-read on the day. The second blocking back seemed to confuse the defense (see the clips below).

2. The second blocking back obscured vision of the handoff. The defense was a lot slower in these plays than in the usual zone read--and take bad angles because they can't see what's going on.

3. The QB may have the option of making a quick pass to the WR on these plays in the future. I would say that this is a certainty, except for the final clip below, where if the option to throw existed, the QB probably should have taken it. Maybe it is an element of the play to be added in later?

4. Sofele has a good burst in space.

5. Coach M has installed some interesting zone blocking techniques (in the clips below, you can see the center reach for the guard's shoulder in the exact same way).

6. When you see the RB lined up a few steps behind the QB in shotgun, prepare for a read-option or its evil cousin, the fake read-option.

Okay, thanks for reading! I intend on analyzing the one time when we faked this play and scored a TD, in the future.

As promised, here are the three other times we ran the same play. Watch for LB/DE confusion on the 1st one. Also imagine what would have happened if the QB had the option to pass in the 3rd one.