A Golden Spotlight on Cal Football vs. Southern Utah

Share All sharing options for: A Golden Spotlight on Cal Football vs. Southern Utah

I have high-def photos of the 3rd and goal overthrow. Or the sidelines wheel route that almost took off my dad's head. Could have done the Hail Mary. Or the pick-six. And any number of penalties. But, I've been here before. I know what this season feels like. In some ways, I feel a sense of relief because my unrealistic expectations for this season have officially been laid to rest. So, as long as the sun keeps shining, the Best Damn Band in the Land keeps playing, and our Bears take the field, it's all good.

Let's take a closer look at some highlights:

The Thunderbirds come out with 20 personnel (two backs, 0 tight ends, 3 wides). Our sturdy golden Bears are in a nickel package with Hill matched up on their slot receiver. We have 3 DL and one LB on the line of scrimmage. The tight coverage at the top of the screen suggests man. 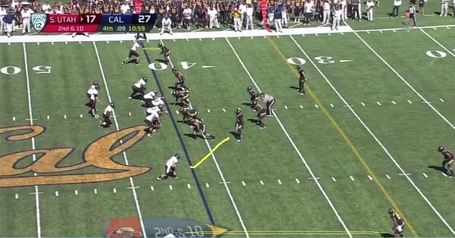 Pre-snap, one of the backs shifts up towards the line of scrimmage like an H-back.

If Cal is in zone, this would overload Hill because he needs to cover both the slot WR and the H-back. 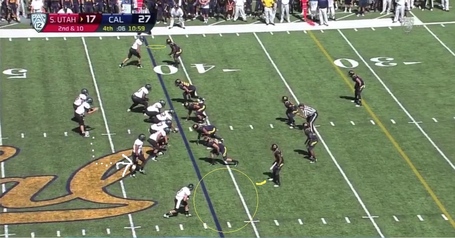 At the snap, the S. Utah QB makes his first read towards the WR at the top of the screen. But, the Cal CB gets a good jam and doesn't allow a free release. This looks like press man coverage. 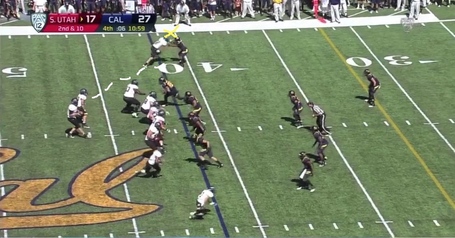 The Thunderbird QB checks back to his second read which is the H-back. Their slot WR has drawn Hill's coverage which should leave their H-back wide open. Notice that their QB is throwing _before_ the H-back has turned back for the ball. This may look strange, but it's what competent quarterbacks are known to do. 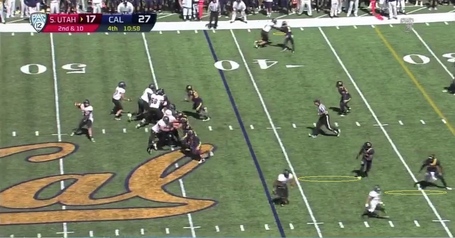 NO SOUP FOR YOU! Cal isn't playing man. It's zone on this side. Anthony read the QB's eyes and left the outside WR to make a break on the ball. 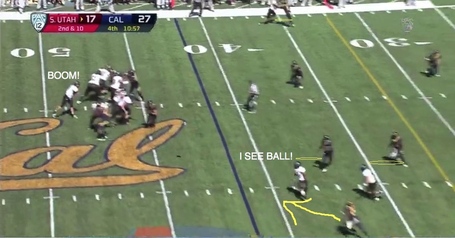 Anthony drives on the ball and picks it cleanly. I see unicorns and rainbows with angels singing in the backround. 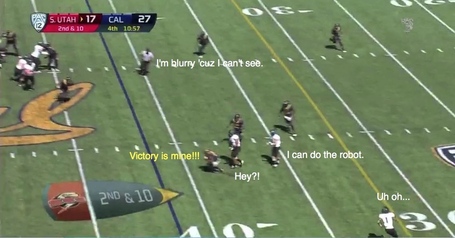 Anthony takes it back upfield. The Thunderbird QB flings himself at the ground to make it look like he's trying to make a tackle. We all know he wants no part of this action. 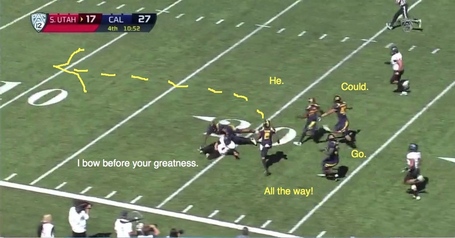 Anthony somehow manages to outrun the Thunderbird linemen. No turf monster. No toes on the sideline. No flags? It must not be a game with bowl implications. 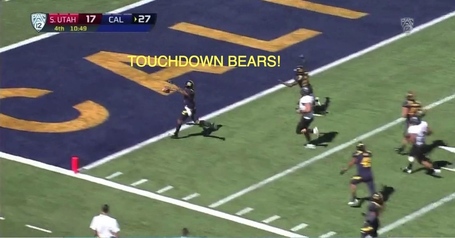 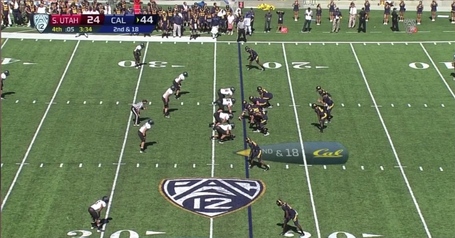 At the snap, the Bears execute a power run to the left of their formation. The FB is leading, the LT (Tagaloa!) kicks out, the LG blocks down, the C moves towards the next level, the RG and RT seal off, and the WRs move forward to pick off their men. 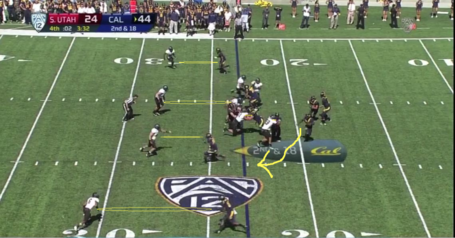 Tagaloa engages and drives his man out of the play. The LG takes his man to the ground. While the WRs engage their men, the center moves to the 2nd level and draws a bead on the Thunderbird linebacker. 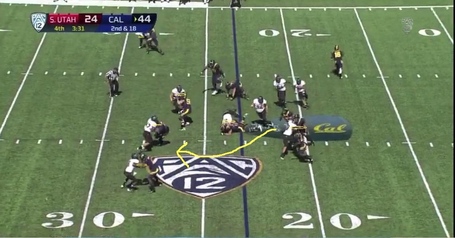 BOOM. Cal's center cuts their LB while the slot WR puts his corner on the ground. Combined with Tagaloa's monstrous kick-out, these are the key blocks that springs Lasco. The rest of the Dline have been blocked out of position. Lasco has a huge hole and makes a subtle move towards the sideline... 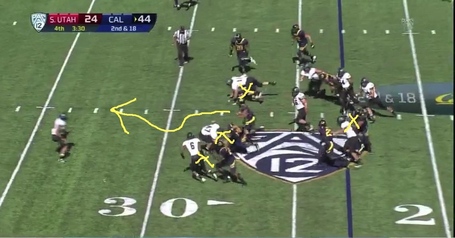 Lasco quickly cuts back towards the middle of the field and jukes the Thunderbird safety out of his jock. As the nearest defender falls down, their deep safety comes over to clean up. But then Lasco hits the jets. 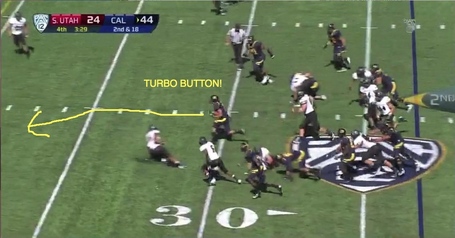 BAD ANGLE! The Thunderbird safety is out of position and it's too late. Though slated as Cal's power back of the future, you can't discount Lasco's wheels. He. Does. Go. All. The. Way. Touchdown Bears! 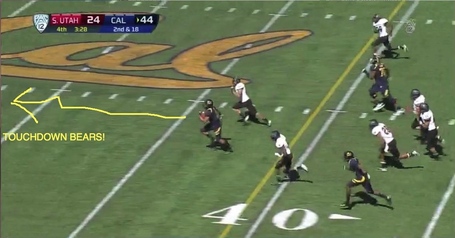 Moala is happy (click here or image for animated gif).