CLICK HERE TO JOIN THE POSTGAME THREAD AND FILL OUT YOUR REPORT CARD.

CLICK HERE TO LOOK BACK AT THE FOURTH QUARTER THREAD.

CLICK HERE TO LOOK BACK AT THE THIRD QUARTER OPEN THREAD

CLICK HERE TO LOOK BACK AT THE SECOND QUARTER THREAD

CLICK HERE TO LOOK BACK AT THE FIRST QUARTER THREAD

Yes, we are excited about the stadium's grand reopening, not to mention the existence of the equally important Simpson Center for Student Athlete High Performance that houses the football program and 12 Golden Bear Olympic sports programs on a daily basis. But beyond the excitement of the new digs (and nostalgia about the old) there is the matter of a football game to play. The Nevada Wolf Pack is today's opponent and, as we know, it didn't go so well the last time Cal played against them. So while today will certainly be a celebration of Memorial Stadium and of a new era of Cal football, it will not be a cakewalk to victory. Cal will have to harness the excitement and electricity in the air, overcome the opening game jitters, and minimize mistakes in order to ensure a proper opening to Memorial Stadium. Because, after all, it's a grand old and new venue that deserves to be opened with a Cal victory, amirite?

This is your official game thread headquarters. Use the comments in this post as your pregame thread. Watch in the comments and above for the first quarter thread as kickoff approaches. Links to the subsequent quarter threads will be posted here as well, just in case you get lost in all the excitement.

Look for more game information after the jump. Enjoy the game. GO BEARS! 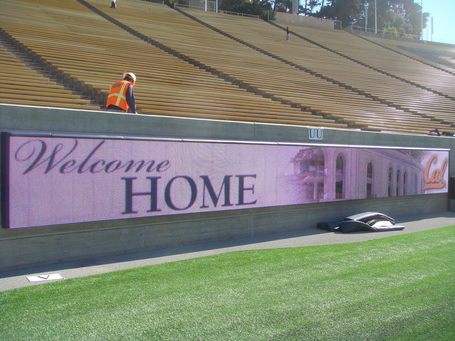 Of course, this season opener is always an exciting event. This year's opener is all the more exciting due to the grand reopening of Memorial Stadium. The excitement measure goes up another notch when considering our opponent: the University of Nevada Wolfpack rolls into Memorial with a good quarterback (Cody Fajardo), a capable offense, and a likely a ton of confidence given that Nevada embarrassed Cal on national television the last time these two teams played, two years ago in Reno. But that was then; this is now. On that dreadful Friday night in September 2010, the Bears were victimized by their own mistakes and by Nevada quarterback Colin Kaepernick. Kaepernick isn't walking through that door for the Wolfpack anymore (he's walking through Jim Harbaugh's door in San Francisco with an enthusiasm unknown to mankind). But Nevada still has some firepower on offense that the Bears will have to deal with.

ManBearCal took a look at the Nevada offense earlier this wek. He summarized his analysis thusly:

This is no light opponent. Nevada is no slouch offensively...we know that first hand. /Pukes. Fajardo is a good quarterback who can run this offense effectively. Nevada's running backs are never an issue; this offense makes them good. They have a guy with the potential to be a very good wide receiver if he's fully back from injury. They have an enormous tight end that the quarterback will lean on. And their offensive line is big, experienced and for the most part battle-tested. This is an offense we've struggled with before.

But I'm feeling really optimistic. I think our defense will be very good this season, despite the great guys that we lost. We're big, athletic, fast, and deep (up front at least). We're also playing at home...to open the season...in our renovated stadium. That matters. A lot. I'd be far more concerned if this were a road game, as past experience has taught us. Our guys have had more time to focus and prepare for THIS offense. The same one that embarrassed us two years ago. If that still stings you, think hoasdw the guys who were on the team, and even Coach Penderagst, are feeling about it.That bodes well for us. This is a revenge game. If we implement and execute the right schemes, this is a side of the field we can really make a statement on.

norcalnick previewed the Nevada defense and how the Cal offense might match up therewith. His conclusions:

At first blush, Nevada's 2011 defense seemed to fall somewhere between average and above-average. The missing piece of context is strength of schedule. The Sagarin ratings gave Nevada's schedule a rank of 88th , despite playing both Oregon and Boise St. The Wolf Pack defense generally struggled against the best competition their schedule offered.

In my mind this is a game for Sofele, Anderson, and the offensive line. Nevada's strength is definitely in their secondary, and despite Maynard and Allen's psychic connection, Cal's offensive strength is still likely the running game. Any time our strength matches up with their weakness I'm all smiles.

Potentially exciting development: The intrigue will likely come from seeing how Maynard and a new receiving core does against a secondary that shouldn't be discounted. If Maynard stays calm in the pocket and spends the game picking out Bryce Treggs, Richard Rodgers and Maurice Harris then that's a great sign that the talent might be in place for a productive offense.

Potentially terrifying development: If the offensive line struggles against Nevada's completely new and completely inexperience front seven, you have my permission to worry about how they'll do against the conference schedule.

Prediction: Isi and C.J. do most of the heavy lifting, Maynard has an efficient if unspectacular day, and the offense does enough for a relatively comfortable win.

So there you have it. CGB's principal previewers have optimism about this one. Even though the Bears most recent history with Nevada is bad, that was 2010 and this is now. With Cal at home and Nevada winless in road openers against BCS conference schools, there might be good reason for optimism.

Enjoy the game. Welcome back, Memorial.