Marshawn Lynch's legendary 67-yard touchdown run in 2010 has inspired a corn maze. Words cannot describe how incredible this is. 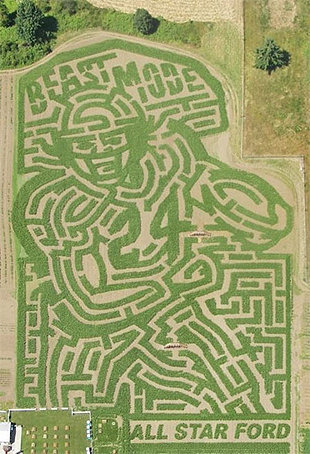 "Every year, it's a big decision, but we really enjoyed his Beast Mode and the fans were so behind that," Camille Hemenway of Rutledge Farms recently told MyNorthwest.com.

According to the Rutledge Farms website, the "Marshawn Lynch Family First Maze" was inspired by a 67-yard Lynch touchdown run in the Seahawks' improbable 41-36 wild-card playoff win in the 2010 postseason over the then-world champion New Orleans Saints, and the "beastquake" that resulted from it. We'll include the Super Mario Brothers version of the run, because it's one of the best football highlights ... well, ever.
...

The maze will be open to the public on August 10, and Lynch will visit on September 1 to sign autographs and raise money for his Fam 1st Foundation, which seeks to empower families in the Bay Area, where Lynch grew up.

The real question, of course -- would Lynch be able to navigate the maze, or would be just bull through it?

"This one is going to take a little bit of time to get through. It's combined two mazes and it should take you a good hour and a half, two hours to get through," Hemenway said.

The only downside is that it looks too narrow to ghost ride the injury cart through the maze. Otherwise, this is a fine work of art.