Share All sharing options for: Q & A on the Nevada Wolf Pack with Andrew Maurins of Silver and Blue Sports

Tomorrow, one of the most highly anticipated days in the history of California Football arrives. Tomorrow, we return to Memorial. Our guests? The University of Nevada Wolf Pack. To learn more about our first opponent of the 2012 season, we talked to Andrew Maurins of Silver and Blue Sports, a premier site for Nevada news and discussions. Many thanks to Andrew for his time and willingness to give us some insight into Nevada. If you are feeling adventurous, feel free to head over and say hi! All we ask is that you represent California as you always do: with class, dignity, and respect.

Andrew's responses to our questions after the jump! 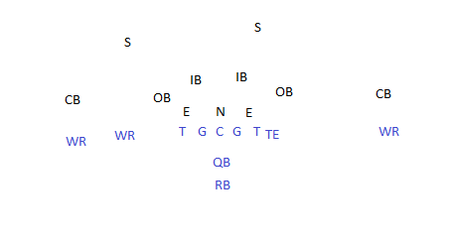 The "Pistol" formation, a formation and offensive concept popularized by Nevada's Chris Ault.

Ah, "bullet" points for the "pistol" offense -- I see what you did there!

~ This team will live and die with Cody Fajardo and how he plays. If he continues to develop as expected and builds upon his 2011 stats, the team will go to exciting places. If he's hurt for any length of time or regresses, replace the words "go to exciting places" with "not go anywhere."

~ The defensive line is potentially problematic. Potentially REALLY problematic. We won't know for certain until at least a few games into the season, but nails will be bitten and sleep will be lost until we do know.

~ Brandon Wimberly is amazing, and not in a fluffy, human interest story kind of way. Getting shot in the stomach and not only making a full recovery but returning to play FBS college football really is the definition of the word. And it's a good thing, too, because the team will need him.

~ Looking past the defensive line, there's much to like about this defense. The secondary has the most returning experience it's inherited in a long time, and the linebacking corps features several players either coming back from prior injury or returning to their more natural position. However, they'll still find themselves in a sticky spot if that line can't put pressure on opposing QBs or slow down the run.

~ In spite of all of the personnel losses and all the turnover in the coaching staff, expectations are still high for this team. Their schedule sets up favorably, and they're a group that expects to challenge for the Mountain West title. If you happen to speak with Coach Ault about it, chances are good that a little of that confidence will rub off on you, too.

2. Nevada's frosh QB had huge shoes to fill last year in replacing Colin Kaepernick and ended up winning WAC FPOY. How is he different from Kaepernick? Is he the same type of dual threat QB, or does one aspect of his game stand out? How do you see him building on his 1st campaign?

Aside from being physically smaller (6'2" where Kaep was 6'5"), Cody Fajardo has displayed a more refined passing touch than his predecessor did heading at similar points in their careers. While showing the same knack for great ball fakes and quick feet that made Kaep famous, he was also turnover-prone (7 interceptions and 3 lost fumbles) and frequently injured when the team needed him most, often as a result of the kind of rash, impulsive mistakes you expect a young QB to make.

Heading into 2012, he has bulked up and appears to be benefiting greatly from the change in passing philosophy brought on by Nick Rolovich. Even though comparing him to Kaepernick is probably unfair to both players, he still possesses all of the physical tools necessary to thrive running Nevada's offense. My money is on seeing a smarter, more confident Fajardo leading the Pack's pistol attack, and who will (hopefully) remain healthy long enough to improve in all of the important stats. 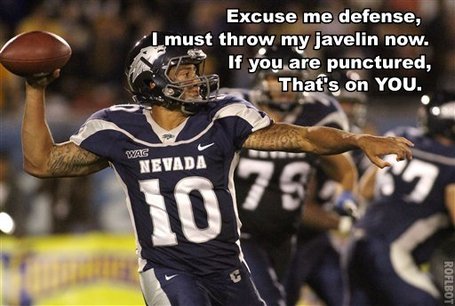 Colin Kaepernick, the bain of the 2010 Cal defense. With Kaepernick gone, Cody Fajardo has some pretty big shoes to fill.

3. Besides Kaepernick, Nevada also lost two standout running backs. Has anyone stepped up to fill the void?

Filling that void (at least, for most of the carries, presumably) will be junior Stefphon Jefferson. He has the most playing experience of any of the backs, and has the well-rounded skills and consistent output necessary to remain the starter for the whole year. This wasn't the case with the 2011 corps of running backs, who never really had a consistent starter stand apart from the others.

Next in line is freshman Tony Knight. He and Jefferson are similar in that they're both well-rounded and don't do any one thing exceptionally well, but his ceiling for future development is a good deal higher. He'll make a cut a little bit quicker or break a tackle a little more fluidly, but because of his youth and the leadership Jefferson has exuded thus far, he probably won't get as many carries.

Either way, the pistol ground game depends less upon who's taking the hand-offs and more upon who's blocking up front, and this facet of the offense is still being counted on to be the point of the spear...er, gun barrel.

4. Defensively, there's always the question whether MWC athletes can hang with other conferences over four quarters. At home, the Wolf Pack really put together an inspired effort against Cal last time. Has anything changed? Are there any weaknesses in the defense that worry you?

Well, there's this inexperienced defensive line you may have heard about, oh, three questions back or so. A unit which was only mediocre at doing what it was asked to do last year returns just one player with collegiate experience, and he was injured for half of that season. The rest of the players who will surround that tackle, Jack Reynoso, range from "talented but unproven" to "unknown and really unproven". This stinks for the rest of the defense, because even if they fulfill their objectives, it won't matter if they have to stack the box to help out the line and opposing teams simply throw over them.

In 2010, Shane Vereen was Cal's workhorse. Who will step up against Nevada this year?

5. What do you think will be the key to this game? Oline/Dline? Mental toughness/turnovers? Will this be a shootout that comes down to big plays or critical mistakes?

For Nevada, I think it will be all about the first half and how they handle it. Historically, Coach Ault's teams are not at their best at the start of the season, and odds are this team will be no exception. But if they can weather the energy of the crowd and the high that Cal's players will be experiencing -- even if it means just staying within one or two scores at halftime -- their chances of springing the upset will improve. If Cal gets on a roll early and things start to snowball out of control, however, they'll likely be done for the afternoon.

Oh, and the D-line will have to at least be serviceable, but you already knew that.

6. Nevada receivers totaled 2,824 yards last season, but returning receivers only accounted for 340 yards. How big of a concern is this for the Nevada passing game?

That number does stand out, and it's true the lack of depth means the unit's productivity is one catastrophic injury away from being severely curtailed. But I think Paul Myerberg of the Pre-Snap Read had a pretty sound take on the receiving corps when he previewed Nevada a few weeks ago:

"There's a lack of experience and proven play-making ability at receiver, but that's not a huge deal: Nevada rolls through the run, for starters, and the passing game doesn't need flash as much as simple reliability - the Wolf Pack will be fine as long as targets like Wimberly, [Aaron] Bradley and the tight ends catch the ball with consistency."

And through spring and fall practices, they've done just that. As I alluded to earlier in the summer, Cody Fajardo's passing strength is most evident in the short- and mid-ranges -- the areas the run and shoot can really open up. They won't need to do lots of heavy lifting -- just enough to keep defenses from loading up the box. It's a marriage of styles that could potentially be very difficult to gameplan against.

7. Who would you like to punch in the face?

Craig James goes without saying. Personally, I'd hold out hope for two punches: one for James the analyst and one for James the aspiring politician. After that, it would be Todd Akin, the entire congregation of the Westboro Baptist Church, Mother Brain from the Metroid video games (though, to be fair, she doesn't really have a "face"...) and Brian from phone sales. He knows why.