Hint: It was the same team that led the Pac-12 in pass defense (fewest yards per game).

That team was none other than the California Golden Bears. Even though Cal fans might have 2011 images in their heads of Colorado's Tyler Hansen torching the Cal secondary with passes to Paul Richardson, or of Washington's Keith Price picking Cal apart, or of UCLA's Kevin Prince completing forward passes, the Cal secondary definitely had its moments of good in 2011. Many of them. What is in store for the secondary in 2012? Cal loses its two starting safeties (Sean Cattouse and D.J. Campbell), but returns its two starting cornerbacks in Steve Williams and Marc Anthony.

TwistNHook: How are the DBs gonna look in Twenty Oh Twelve???

norcalnick: Hopefully, very very healthy. I think there's lots of faith in our starting foursome of Marc Anthony, Steve Williams, Josh Hill and Alex Logan, with Avery Sebastian likely seeing plenty of time as a backup or maybe a nickel back. But if Stefan McClure has to redshirt because of the injury he sustained, we may not be able to withstand any other injuries to our starters.

Kameron Jackson did get some experience as a backup cornerback last year, but I'm not really sure what we have behind him on the depth chart.

Kodiak: Speedy Williams, Marc Anthony, and Josh Hill have plenty of starting experience. Unfortunately, both Williams and Anthony have missed time each year with injury. Where we get in trouble is if our starters go down. With McClure likely out or limited for the year, we're leaning on Kam Jackson, Adrian Lee, and Joel Willis. Depending on who steps up, we might need to move Hill back to nickel or corner and promote one of the young safeties.

With so many teams going to spread-type offenses, depth at corner has become more important. In some ways, coverage ability is almost secondary to open-field tackling. There's plenty of unknowns here. It's odd to say with two experienced starting corners that we might be better off in a year, but it almost looks that way when you scan the depth chart. The young guys need to be ready to hold the rope. Perhaps another year of Blasquez will keep our starters strong enough to endure a 12-week season with no byes.

(All right, all right, I get it. We're not deep. Will this be the consistent theme among the CGB roundtablers? Find out after the jump. And click here to find all the previous roundtables you may have missed.)

solarise: According to our two deep against Nevada, Adrian Lee will be backing up Mark Anthony. I'm confident our defensive backs will be steady if not stellar. Mark Anthony and Steve Williams have a great opportunity to earn All-Pac12 selections. Alex Logan, Josh Hill, and Tyre Ellison are experienced and should contribute. Michael Lowe (formerly Coley) from DeMatha in Maryland played on special teams and was out this Spring due to injuries. It will be good to get him back for depth.

I'm high on Kameron Jackson to breakthrough this year. No Stefan McClure means more playing time for Kam. There was a lot to like about his frosh yr especially his ball skills. If all goes well, I think we are looking at the development of another Syd type of a lockdown corner.

unclesam22: I'm with everyone else on this. As the Pac-12 gets even more pass happy with Leach's offense and the USC attack, this is such an important position. I think that we're in relatively good shape here but as has been mentioned before, if anyone goes down with injury we could be be in big trouble. The ongoing loss of McClure hurts us as I think had he not been injured he might have pushed for a starting job this season. But there's nothing we can do about that now, so the young guys are going to have to grow up and step up fast if called upon. 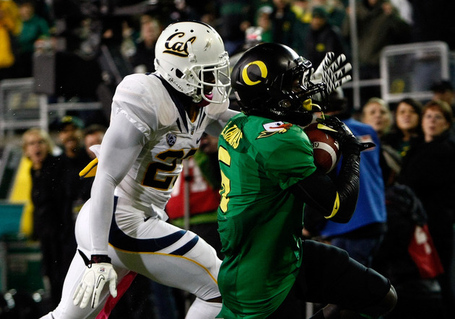 Josh Hill and the rest of the Cal secondary will have the tough task of trying to defend against Oregon's DeAnthony Thomas, among other receiver talent in the conference.

Ohio Bear: I am worried about the DB unit. I do like our starting corners: I think Williams and Anthony are pretty good cover guys. I'd feel a lot better about our corner situation, however, if McClure were back and healthy again. I very much liked what I saw from McClure last year and expect him to be a heckuva player for the Golden Bears before his career is over.

It's a potentially problematic situation to have to replace both safeties. That said, I have confidence that Josh Hill can be a capable replacement for Cattouse at the free safety. Hill is a smart player who has a knack for being around the ball, so I envision him being pretty good at that spot. As for the other safety position, I haven't seen enough of Alex Logan to really know how he is going to do there. We have heard good things about his ability but until we see him thrown into a lot of game action, I'm going to take a wait-and-see approach.

Cal has some good athletes at the DB positions, but just not a whole lot of experience when you get past our starting four. With all of the passing offenses in the league, that gives a little bit of heartburn if injuries force us to dig deeper.

norcalnick: My hope is that Cal's safeties can play with confidence because they know that we have a monster defensive line to prevent QBs from having the kind of time they need to pick apart zones or wait for WRs to come open deep.

Avinash: The Cal secondary always seems to be one player away from a complete unit, which means every year they always seem to line up a stinker. They get lit up by a pass-heavy attack like Arizona in 2008. They got lit up like a Christmas tree by Jake Locker in 2009. Matt Barkley and Andrew Luck torched them in 2010. And then Oregon solved their issues against Cover Zero with some creative gameplanning in 2011.

This year they will be facing the following offensive minds: Urban Meyer. Lane Kiffin. Todd Graham. Noel Mazzone. Mike Leach. Chip Kelly. Sarkisian has his moments. Furd has its own identity. Which offenses do you think will give our secondary the most trouble this year?

unclesam22: I think that USC, given their talent in the passing game will give almost everyone trouble, but will definitely be a tough match-up for us. I also think that WSU might pose some problems for the DBs since they have Leech and an experienced QB heading their attack. Of course, as we've shown, and as Avi mentioned, we are susceptible to someone getting hot and torching us out of the blue (Colorado last year anyone?) so besides the previous two I mentioned, everyone kinda scares when it comes to throwing on us.

Ohio Bear: I'd have to say USC, too. Matt Barkley is the best quarterback in the conference and he has great weapons at receiver in Robert Woods and Marquise Lee. I realize that Cal did a decent job against the Trojans last year, but I would still expect USC to give us the most trouble. Their skill guys are just so good. 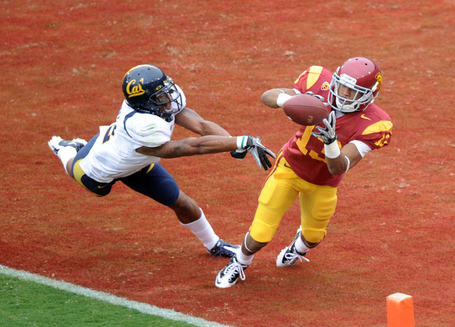 Will Marc Anthony and the Cal secondary be able to defend against Robert Woods and the USC passing attack this season?

Kodiak: The best thing for our secondary would be if we're able to generate a consistent pass rush out of our base look. (four rushers). Although our starting corners are solid, teams have really picked on our LBs and safeties in the past. Coach Pendergast likes to use both LBs and safeties in slot coverage, perhaps because we didn't have a lot of CB depth last year. If Jackson and Lee play well, we might go with more true nickel/dime looks since we have less depth at ILB. Otherwise, it will probably be Hill in coverage and bring in Sebastian, Ellison, or Lowe. Let's not even think about the injury bug here.