There are always ups and downs in the world of recruiting, but it appears as though the 2013 recruiting cycle, in particular, might be quite the emotional roller-coaster for invested Cal fans. First came the very disappointing news: four-star local De La Salle product Elliott Pitts, previously thought to be quite fond of the Golden Bears, committed to Sean Miller and the Arizona Wildcats.

Then came the good (and potentially incredible) news: Local consensus top 50 prospects Jabari Bird, Marcus Lee, and Aaron Gordon will all trip together to see what Cal has to offer on September 1. Bird and Lee were already known to have high interest in Cal and have visited previously, but the Gordon development is quite intriguing, as it seems as though Bird is attempting to sway Gordon into joining a potentially historically impressive recruiting class to bring the magic back to Haas Pavilion.

Of course, those negative Bear fans out there might see the flip side of this development: Gordon might attempt to sway Bird to potentially join him at the University of Washington, which is regarded as perhaps the favorite to land Gordon. Luckily, Lee does not have Lorenzo Romar's squad listed amongst his seven finalists, so if this three-headed monster does, indeed, choose to attend school together, it will most likely be in Berkeley. And there's more good news.

That three-headed monster? We might have to add another head, as another elite California prospect, Isaac Hamilton, also plans on visiting the Cal campus (though probably not on September 1). Hamilton claims that Cal is recruiting him very hard, and he just happens to be friends with Jabari Bird. With Sami Eleraky's academic ineligibility opening up another scholarship...well, dare a Golden Bear fan dream? Let's take a look at these four prospects giving Cal fans potential optimism about the direction of the program's recruiting. We'll start with the three recruits visiting Berkeley on September 1 and talk about Hamilton in more detail in a future post. 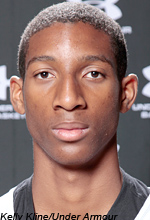 It's not hard to see why Lee has exploded onto the national recruiting scene. His extraordinary athleticism and length allow the Deer Valley product to impact the flow of games dramatically. Lee's shot-blocking and rebounding are already considered elite, and his passing has impressed scouts. At the Nike Global Challenge, Adam Zagoria was quite complimentary of the lanky big man, an impression furthered by an NBA scout at the event:

"[Lee is the] best interior player here," one NBA scout told SNY.tv at the event. "Great feel for the game. Needs to get stronger. I’d like to see him be a little more assertive from 15 feet, take that jump shot. He definitely changes everything around the rim. Great passer, great feel."

Though Lee might be bursting with potential, there are some question marks in his game. As brought up by the scout quoted above, he must add strength to his lanky frame. Dominating at the high school level is one thing, but at his current build, Lee will find himself getting pushed around a bit at the college level. Marcus is also somewhat raw offensively at the moment, relying almost solely on his athleticism to put up points, which, once again, will not translate fully at the NCAA level. He must incorporate some go-to moves and develop his jump shot if he wishes to fully reach his massive potential.

Based on potential alone, Lee is probably a top 15 recruit in the country. If he puts it all together, he has the upside to be a dominant inside presence at the next level. He's a possible program changing recruit, and he would be a very nice addition to the 2013 recruiting class. 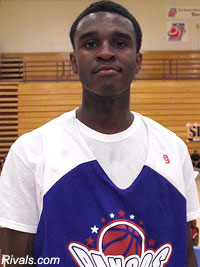 Like Lee, Bird is an explosive athlete capable of some ridiculous dunks. Unlike Lee, Bird's explosive athleticism is paired with a good deal of polish. The Salesian product also possesses a good frame, with some bulk, allowing him to finish in traffic, matched with great length. His jump shot isn't necessarily automatic, but it is definitely a plus skill for Bird and demands some respect from his defender. SI's Eric Bossi was quite complimentary of Bird in a recruiting write-up in June, referring to him as "a long and athletic wing with a developed mid-range game and the ability to finish at the rim."

Bird does have a few holes in his game. At times, like many players with his athletic ability, he can be a bit flashy and forces things. His jump shooting could be a little bit more consistent, as could his ball-handling. However, the few holes in his game should fix themselves as Bird matures as a player and receives college level coaching. In the end, as put by ESPN:

Bird may have the most upside of any wing-type out west. He has all the intangibles scouts look for in a elite scoring guard. He needs to get stronger but that should come with maturity and weights. Overall, if he can tighten up his mid-range skills (particularly his handle) and fundamentals (getting on balance/triple threat position) he has the potential to be an upper-tier national level recruit.

Jabari Bird's combination of upside and relative polish results in an elite recruit, one that could be a program changer for Mike Montgomery and the Bears. 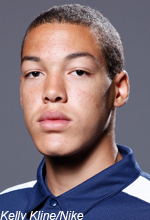 *Not "officially" listed as a finalist, but Gordon plans on visiting these schools

Aaron Gordon is THE NASTIEST Player in High School Basketball!!! And He's ONLY a Junior!!! (via Yayareasfinest2006)

A consensus top 10 recruit, Aaron Gordon is a dominant presence widely thought to be the top overall prospect in the west. It's not hard to see why he is so highly thought of. His frame is terrific. He is becoming an explosive athlete fully capable of jaw-dropping plays. Gordon also happens to be a great ball-handler and decision-maker for his size, and thus can act as a point-forward of sorts. ESPN, like many other reputable sources, is ebullient in its praise for the Mitty star:

Gordon is the No. 1 prospect in the west regardless of class. He is not only becoming as bouncy as his older sibling Drew Gordon (transferred from UCLA to New Mexico) but he is a much better all-around player. His skill level and savvy have grown considerably in the past couple of seasons and he'll probably be able to swing between both the 3 and the 4 at the next level, depending how his frame fills out.

Gordon's jump shot does need some work, but even with that skill at its current stage (decent but inconsistent), the elite forward is still a dominant force. Out of Bird, Lee, and Gordon, Gordon probably has both the highest floor and the highest ceiling, which is saying a lot considering the skill levels of that duo.

Aaron Gordon reminds me of former Iowa State forward Royce White, a do-it-all, game-changing, dominant force. A player of his caliber should have an immediate impact at the collegiate level, and I would be surprised if he doesn't compete for Freshman of the Year honors in his first season at the next level. Any coach would be ecstatic to add a player like Gordon to his roster.

I'm not a big fan of calling a recruit a "must-get", and I rarely do so. However, I consider Bird a "must-get" for the Golden Bears in the 2013 recruiting cycle. He's local. He's elite. His father, former NBA player Carl Bird, played for the Bears himself. And, he actually likes us. HE REALLY LIKES US. His clear-cut top two right now consists of Cal and Washington (though he also plans on visiting Oregon and Colorado), and there any some indications that he favors the Golden Bears at this time. Montgomery could change the direction of the program as a whole through this addition. This is big. The stakes are high.

While I wouldn't exactly consider Lee a "must-get", he would also be a very important piece in this recruiting class. Though he might be a little less likely than Bird, given the national powers we are up against in this battle (he has visited UCLA, and plans on visiting Louisville, Kentucky, and Indiana), there are some indications he might be favoring Cal at this time as well. The Golden Bear coaching staff has really done a great job with the Deer Valley forward, and has been in on him as long as anyone.

Though the recruitments of Lee and Bird are not close to being over, I do like Cal's chances with this tandem. Both have visited Berkeley unofficially together, and took in some very intense, electric atmospheres in Haas, such as the sell-out crowd for the game against Stanford last season. Both also plan on visiting the Cal campus again and have great relationships with the coaching staff. With Montgomery recently signing an extension, the stability is there to attract Bird and Lee.

Aaron Gordon is a completely different matter. Though Cal has been recruiting him hard for a while, he has never seemed to reciprocate this interest, failing to even name Cal amongst his finalists. However, things could be changing as Bird and Gordon continue to entertain the idea of attending the same college. The fact that Gordon is at least visiting Cal along with Lee and Bird is slightly encouraging. Still, though, I would consider the local product a long shot. It's nice having a tiny slimmer of hope though!

With recent recruiting teases and near-misses, it seems foolish to expect elite local players like Jabari Bird and Marcus Lee to commit to Cal. But I'm telling you now: we actually have a legitimate shot with these two. Aaron Gordon...well I wish I could say the same. Landing Bird and Lee would inject some much needed explosive athleticism to the roster, thus injecting some more electricity inside the Haas of Pain. Gordon would give Cal a top five recruiting class in the country. We're talking about potential program changers here! Bird and Lee could be the foundation of a historical recruiting class and, if you add Gordon to that duo, you would have a mind-blowing class on your hands, especially taking into account recent recruiting trends. Cross your fingers, Cal fans.