When you lose your two starting inside linebackers off last year's team -- including the Pac-12 defensive player of the year -- it is inevitable to ask whether this year's linebacking corps will be able to be nearly as good. The Cal defense has had the good fortune to have good linebackers over the years. But this year's team has big shoes to fill with the departure of inside linebacking stalwarts D.J. Holt and 2011 Pac-12 defensive POTY Mychal Kendricks. How will the Cal defense adapt and move on? CGB's fearless leadership fearlessly addresses the Cal linebacker situation.

TwistNHook: The linebackers have been a strength position at Cal the last few years. Will that continue in 2012?

Kodiak: I'm afraid that we're set to take a step back this year. On the outside, we should have a nice trio of Scarlett/McCain/Whiteside with the steady Campo also in the mix. Scarlett and McCain have the potential to be incredibly disruptive and Whiteside really has a knack for rushing the passer. When we need to play coverage or assigned-based defense, Campo is very steady and does a good job spying on backs trying to sneak out late.

Inside is where I'm concerned. Right now, we have Mullins and Hurrell set to start. Neither of them have made much of an impact previously when subbed in. Most noticeably, there was a big drop when they replaced the injured MikeyMo against Nevada. The talent gap was significant enough for the coaches to shift Kendricks inside after starring on the outside. This year, we shifted Wilkerson back inside as well as Jason Gibson. Now that they're both hurt, it's Mullins/Hurrell backed up by Forbes and RS frosh Jalen Jefferson. There isn't a lot of significant playing time in this group. Khairi Fortt has experience, but won't be available for 2-3 games due to injury and may redshirt.

My concern is that our veterans may be steady, but not strong or fast enough to be consistently effective. On the other hand, our younger players may not be ready to make the right reads and get the defense in position.

I hope to be wrong, but I suspect that we're going to be particularly vulnerable in coverage and various types of mis-direction such as play-action.

(Wow, leave it to that Kodiak fellow to throw a wet blanket on things. Is he right? See what others think after the jump.)

Ohio Bear: I am intrigued about our guys on the outside, Scarlett and McCain. With McCain, we know he is an athletic, speedy pass rusher on the outside. With Scarlett, we know that he had an outstanding training camp to launch to the top of the depth chart at OLB.

It's ILB I'm worried about. Mullins and Hurrell are the starters. These guys are veterans of the program. But as Kodiak said, neither one has been an impact player up to this point in his career. And they have big shoes to fill, replacing Pac-12 defensive POTY Mychal Kendricks and the solid D.J. Holt. We would be naive to think that we won't have a dropoff at the ILB position this year.

2011 Pac-12 Defensive Player of the Year Mychal Kendricks: yeah, Cal will miss him.

It could be a strength because I think there's lots of potential talent. I don't think we can be sure which guys will be the ones to step up, but Cal certainly isn't lacking for candidates. I think it could be a weakness because there's such a lack of experience and proven producers. Cal linebackers: the roulette table of 2012.

Vincent S: I would like to echo everyone's concerns about the ILB position. I will point out that Scarlett had one impressive highlight tape; that combination of size, speed, and power is amazing. I expect him to have a huge impact from the OLB position. I consider McCain proven at this point. On a basketball court, 6'6" is average; on the football field, that kind of reach is freakishly awesome. However, it does all go back to the ILB position. If they play their assignments well, we'll be okay. If not, it's going to be a long season.

TwistNHook: I wonder how Cecil Whiteside missing a few months will affect things? 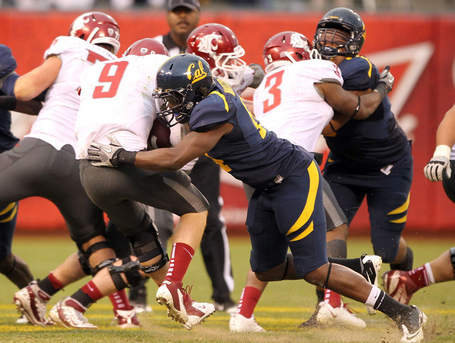 Avinash: I suspect he is out of the rotation and will not be a factor to start this season, although his talent as a pass rusher could get him back on the field at some point. He's missed a lot of playing time.

Ohio Bear: This brings to mind an interesting point. Could it be that we will see the linebacking unit improve in quality and depth later in the season? Whiteside certainly showed flashes of being a talented rush linebacker, so the Bears' defense could get a boost if he is able to play his way back. And Cal's inside linebackers could get a boost themselves when Khairi Fortt finally is game ready and gets into the rotation. Not to mention David Wilkerson, who had lots of playing team last season: if Wilkerson gets healthy, Cal gets another body with game experience to add to the mix.

HydroTech: I'm a little concerned about our linebacker situation. It seems like we're counting on a lot of guys who don't have a lot of experience. McCain is a sophomore. Likewise, Scarlett is a sophomore and doesn't have a ton of experience himself. While Mullins and Hurrell are seniors, they haven't had tons of playing time -- not like a three-year starter would, for example.

I would say that Linebackers is probably the one position on defense where I am pretty worried.

unclesam22: I'm excited to see how our young lb corps come along. I think that the talent is definitely there and with some seasoning I feel like this unit will become a dominant force for years to come. Obviously they are the key to the defense but I think that we all have plenty of reasons to be optimistic about our linebackers.