Is This Where It Gets Dicey? Cal Offensive Line Roundtable

Share All sharing options for: Is This Where It Gets Dicey? Cal Offensive Line Roundtable 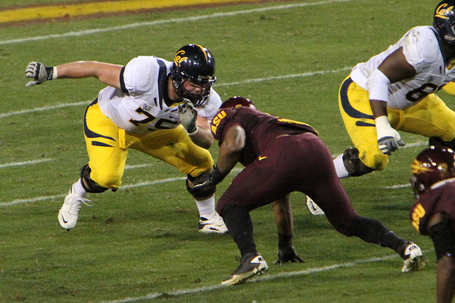 Your intrepid CGB writers and mods recently sat around the roundtable and discussed a dicey topic: the Cal offensive line. Even an unfrozen caveman lawyer could make the case that the Cal offensive line is the key to success for this year's offense. The Bears have dynamic playmakers at the skill positions (e.g., Keenan Allen, Isi Sofele, C.J. Anderson, and probably even true freshman Bryce Treggs), but the ability to get the ball to those guys to do damage depends upon whether the offensive line gels as a cohesive and effective unit.

TwistNHook: How is our offensive line gonna look in Twenty Oh Twelve??

LeonPowe: Man I'm really hoping year 2 of Coach M 2.0 gets us back to the kick ass lines of 2004-2006. Yeah we had awesome skill players - ARod! DJax! Money Lynch! But the hogs up front allowed us to be dominant - which is I think an overlooked aspect of the recent history of Cal football. I guarantee Maynard will be better if he isn't running for his life every other down.

As to IF we'll actually be better I don't know.

Vincent S: Mr. Powe is correct. Without the scary line of 2004-2006, there is no way Steve Levy would have looked effective in any shape or form. Ayoob in fact may have played slightly better if he had to run for his life more. Longshore was also blessed early on with a great line (as well as some of the best skill players ever to suit up for Cal).

I don't think we have that line this year. I'm highly concerned about tackle depth. Our guard play should seemingly be strong, which bodes well for a power run game, but without good tackle depth, we are screwed if someone goes down. MSG and Rigsbee need to be HEALTHY if we want to have a good season.

(See more roundtable thoughts after the jump. To see the offensive line and every other position on the Cal depth chart, click here.)

Avinash: I don't know what to make of this group at all. I'd say the loss of starters is going to be rough, but as a unit the O-line didn't play particularly well last season. There's no measurement to confirm this, but they might have been one of the most penalized position groups in the country. They had a center who couldn't snap out of shotgun. They got blitzed up by Texas. There were just too many occasions where they looked subpar.

These guys had too much Marshall instilled in them. They were always one step behind instinctively and constantly in reactive mode. I would presume the second year of Coach M would be enough to fundamentally shift things in the right direction. Jordan Rigsbee is a total Coach M product, and Tyler has been around long enough to know some of the Coach M tactics.

Unfortunately depth (again) is an issue with Galas and Brazinski out. We have at least two freshman on the two deep, and neither Geoffrey Gibson or Alejandro Crosthwaite have seen the field. Bill Tyndall are the only guys with any real playing experience (and it's sparing at best). The guys left have to stay healthy for this offense to work the way we want it to.

solarise: With Galas out, you are looking @ a scrambling effort with Schwenke @ Center, MSG & TRigs @ the Tackle spots, JRigs stationed @ Left, and uncertainly involving the Right Guard. Coach T's Bears Camp post practice interviews indicated that Chris Adcock was rolling with the 1s @ Right Guard. We are more than half-way thru camp and I think this is the going to be the starting OL come this fall. The depth issue as underscored by Avi is largely dependent on the emergence of our youngsters. Adcock is pushing for a starting position. Coach T was positive with Matt Williams coming along with his athleticism. Since the Bears travel with 8 OLs, Matt Cochran has a realistic chance imo to play as a tru frosh with his background @ center and college-ready physicality. That leaves Crosthwaite and Gibson battling for significant playing time. Honestly, I like Ale's chances to emerge as a versatile stop-gap Guard/Tackle lineman similar to MSG. Bottom line, we need growth and consistency at the line. Our underclassmen will have to provide what's necessary and Maynard's legs will take care of the rest.

Judgement day for the OL comes early on 9/1 against Nevada. Until then, pump pump pump that sunshine!

I'm totally and completely irrationally optimistic about our O-line this year. I believe that another full year with Coach M will start to show huge dividends this year and I think that we've brought in some great guys that are really doing to do well for us. I'm a firm believer that the O-line dictates the success of the entire offense and I really think that this year they will take another step forward and really show some good improvement. I'm really excited to see how they do.

Ohio Bear: That's some serious sunshine pumping from unclesam. I can't begin to be that optimistic. I like the fact that we have guys with significant experience in Schwenke and Summers-Gavin. And from all accounts, it looks like Schwenke will be a solid center. But as much as I think it's a cool story to have the brothers Rigsbee (Tyler and Jordan) occupying the left side of the O-line, I can't help but wonder how the relative lack of experience will affect us. Not to mention depth -- if anyone goes down with an injury, where will we be?

solarise: According to the omnipotent Kodiak, Matt Williams has been moved to Guard and passed over by tru froshs. The traveling eight will prob include Geoff Gibson then. Pump pump pump!!!

solarise: I'm a fan of any and every player getting an opportunity to show what they are all about.

atomsareenough: Well, sure, I'm a fan of that too, but I'd prefer to see them earn their playing time rather than get the job through attrition. Still, I hope whoever gets thrust into getting significant playing time takes the opportunity and runs with it... Geoff Gibson included.

Anyway, it seems like things are gelling on the O-line a bit, as solarise and Avi pointed out. If the starting 5 are MSG (RT), Adcock (RG), Schwenke (C), J. Rigsbee (LG), T. Rigsbee (LT), then the other three are Gibson, Crosthwaite, and... who else? Is the competition for that final spot? Is it between the three freshmen (Tagaloa, Moore, and Cochran), plus Tyndall? It seems like Okafor will certainly blueshirt. Maybe things will start clicking for Williams and he can play his way onto the field at some point. He's supposed to be a really good athlete, and he's 6-6, 300 lbs, so it sounds like he could be a beast on the line if he got it together.

Avinash: I'm pessimistic on the O-line until I see them in the Horseshoe. You never really know about how good your guys are until you see them handle the noise of an opposing crowd. The past two years they have been off-kilter with regards to the cadence and the snap count, and drives get killed way too often.

The reports I hear are good. But three new starters is nothing to sneeze at, and it's just really hard to look at that depth chart and see more than one or two of those guys stepping in and being super subs. These guys need to stay healthy and learn on the job quickly. That's tough to do when Ohio State and USC are on your schedule in September.

Ohio Bear: True that. We might be able to tell a few things after the Nevada and Southern Utah games -- which we can hopefully come out of unscathed by injury -- but we won't really know how good we are until we face a quality BCS conference opponent, especially on the road. The environment at Ohio State will be unbelievable. If we see the offensive line handle that with poise and with minimal mistakes, I think that will bode well for the rest of the season.

(What do you think, CGB readership? Worried? Or in Coach Michalczik do you trust? Share your thoughts in the comments.)