No practice on Sunday (or Monday for that matter)--just a lot of weights. So back to making projections.

(In case you missed the video the first time!)

Looked over the offense on Thursday and the offensive line on Saturday; for the most part, everything seems in order--we'll go back to them again. So let's head over to the defense, which has a lot more upheaval to deal with.

One thing lends well to the defense not dropping off too drastically this season. Cal's defensive line generally rotated their best six guys last season. So while Owusu-Tipoti-Guyton were our regular starters, we saw plenty of Coleman, Payne and Jalil all rotated in and getting significant snaps next season. That means we should have four D-linemen with regular snaps last season.

Defensive line projections after the jump.

This isn't your typical two deep, so I'll try and break it down.

Cal could have a very peculiar 3-4 this season with behemoth DeAndre Coleman lined up at end and early bloomer Mustafa Jalil on the other side. Kendrick Payne takes over primary nose tackle positions. Then you have Aaron Tipoti playing whereever and whenever as Captain Versatility. Tipoti does have the motor to play outside and the strength to play inside, which is a great luxury to have on top of our more pegged position players.

With regards to depth, the Bears should be able to continue to rotate six guys in and out. Todd Barr is ready to crack the rotation as one of our new defensive ends. Vililami Moala has developed quite a bit since last season; it just seems like a waiting game for him to get on the field. I actually wouldn't be surprised to see Tipoti play more DE than NT if Moala comes into his own. Keni Kaufusi is probably going to get snaps. Antione Davis is probably going to see some time here. And Austin Clark should get into the rotation when he gets back from injury.

Also something that might be entertained is the possibility of putting Scarlett at the line as a hybrid DE/LB on 3rd down situations. Scarlett was originally a DE but has evolved into the Predator LB that can play att he line when needed. If Cal decides to go to their 4-3 packages when they're facing a sturdy offensive line, Coleman could be slid over to the three technique DT. Then you could put up a Tipoti-Payne-Coleman-Jalil front line. In many ways Coleman is more of a tackle than an end, so don't be surprised if you see Coleman slide a little inside and an outside linebacker hustle up to the line of scrimmage to give us that 4-3 look (but with 3-4 personnel).

So you'd see the standard 3-4 on first down. 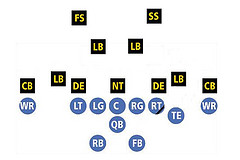 And then a lot more of this on 2nd/3rd down (most likely with a linebacker rather than a free safety). 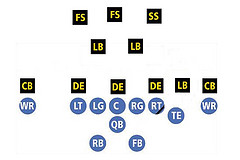 (HT danzig, from way back when)

Of all these guys out there, Tipoti is probably the only one I feel real confident will maintain the steady standard; the rest of the guys have various weaknesses. Tipoti has the versatility to line up at various positions and use that motor to keep on grinding all three downs. Star Lotulelei is going to walk away with all the big defensive line awards, but I get the feeling Tipoti is going to be right beside him in competing for All-Conference honors.

As for the rest of the starting hogs, there's a lot to like and some reason to worry. Payne is a yeoman nose guard and will probably be well-developed as a fifth senior, but he has had some fatigue issues in the past that have kept from being an every down NT. It's no surprise that Tipoti will be seeing a lot of time here, with Moala bringing up the rear. Coleman is a big dude who can hold his size but probably will struggle with speed, which is probably why you'll see him play a lot of DT. Jalil has good upside now that he's cut down his weight to prototypical DE size, but now that he's a starter it's uncertain how well he can combat the best tackles.

It's a pretty solid group. If healthy, they should contend for best in the conference yet again. If unhealthy, adventures begin.

Tedford mentioned a top seven rotation that he's comfortable with. I'm dead certain on the top four, but the three behind those starters is still anyone's guess.