For the first time that I recall, Jeff Tedford opened up on record regarding his feelings on how Tosh Lupoi left for Washington. Bob Condotta of the Seattle Times caught up with him at Pac-12 Media Day and managed to procure some of Tedford's feelings on the matter that Lupoi left Seattle.

"I don't have any resentment against Sark (UW coach Steve Sarkisian) or anything like that,'' he said. "Coaches move on all the time, so that's not a big deal. The timing was a little bit awkward because you are a week-and-a-half away or so from Signing Day, so that was a little awkward.

"I just wish it would have been a decision made earlier and stuck with it one way or the other. The thing that was a little awkward was thinking somebody was going to stay and then they end up leaving. I just wish it would have happened early because I don't have any animosity against anybody that wants to further their development or their career for any reason, be it financial or whatever. I'm good with that. But the timing was just a little awkward.''

Generally, I take Tedford at his word when he expresses his personal feelings on a sensitive matter like this one. Tedford doesn't seem like a man capable of possessing an ounce of duplicity. This is the man who refused to score a garbage-time touchdown against Southern Miss when a BCS berth could have been on the line, and gracefully put the past behind him when he met up with Mack Brown at the Holiday Bowl last season. In general, he seems to be a man of honor and generally seems willing to let bygones be bygones.

Then there was this little nugget at the end.

"Like I said, Tosh played for me. I gave him the opportunity to be a GA (graduate assistant), I gave him his first coaching job --- this is not about us"? 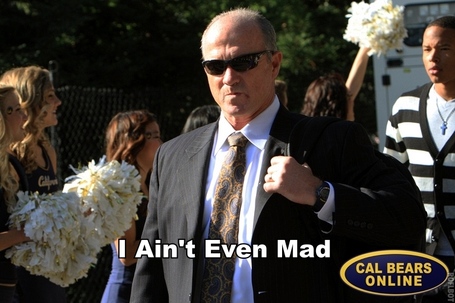