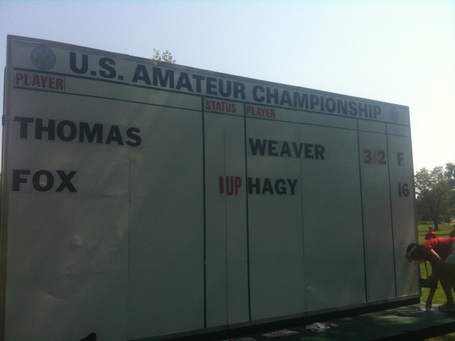 UPDATE: FOX RALLIES FROM TWO DOWN WITH TWO TO PLAY TO DEFEAT WEAVER ON THE 37TH HOLE.

The United States Amateur Golf Championship is the premier major championship for amateur golfers. Included among the tournament's past champions are familiar names like Bobby Jones, Jack Nicklaus, Arnold Palmer, Phil Mickelson, and Tiger Woods. Today at Cherry Hills Golf Club in Colorado, Cal junior Michael Weaver, who redshirted last season to concentrate on gaining admission to Cal's Haas School of Business, will try to add his name to the list of champions and become the second Cal-affiliated player in the last four years to win the U.S. Amateur. (Byeong-hun "Ben" An won the 2009 U.S. Amateur as a teenager and Cal recruiting commit. An went on to play one year at Cal before turning professional.) Today's 36-hole championship match began at 6:30 am PDT. NBC will televise two hours of the championship match beginning at 1:00 pm PDT.

Weaver advanced to today's championship match with a 3-and-2 win over Alabama's Justin Thomas. And it was nearly an all-Golden Bear championship final. Cal rising junior Brandon Hagy had the lead on the back nine before falling 1-up to Chattanooga's Steven Fox, who will be Weaver's opponent today. Hagy, who sported the familiar Cal blue and gold colors during the match, was tied with Fox on the final hole, but fell when he could not match Fox's birdie.

Today's championship match features two players who were on the brink of elimination from the tournament on Wednesday. The U.S. Amateur tournament format consists of 36 holes of stroke play with the top 64 then advancing to six rounds of match play. Both Weaver and Fox survived a 17-for-14 playoff on Wednesday to gain spots in the 64-player match play phase.

If any of you watched Friday's coverage of the U.S. Amateur on Golf Channel, you know that there was a little bit of a Cal golf love fest going on, with the commentators impressed at the fact that two of the four semifinalists were current members of the Cal golf team. "Cal golf is looking pretty good isn't it?" one of them commented. "(Coach) Steve Desimone must be excited about his team." Yeah, I would think so.

This is your open thread for today's championship match. See more details on the semifinal matches and some pictures that gbruin of Bruins Nation (who is attending the event) graciously sent to us. 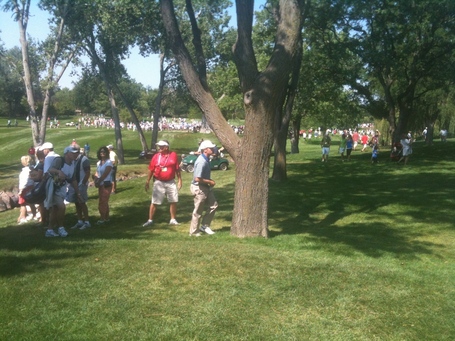 Weaver got out of some trouble here on his way to the semifinal victory. (Photo courtesy: gbruin of Bruins Nation.)

Weaver got off to a hot start in taking control against Thomas, making birdies on the opening three holes. He went 3 up when Thomas missed a 9-foot par putt on the par-4 fourth. Weaver, a redshirt junior at the University of California-Berkeley, made his fourth birdie on the front nine by rolling in a 35-footer on the par-3 8th to take a four-hole advantage.

Making his second consecutive Amateur appearance, Weaver, who missed the match-play cut by one stroke at Erin Hills in 2011, curled in a breaking 22-foot putt for birdie on the 10th for a 5-up lead. But Thomas, No. 5 in the World Amateur Golf Ranking (WAGR) and the consensus national player of the year from the University at Alabama, won three out of four holes with a pair of par putts and an 18-foot birdie at par-3 15th.

Weaver steadied himself on the 16th hole. Thomas' birdie attempt broke right of the hole and Weaver followed with a short birdie putt to close out the match. 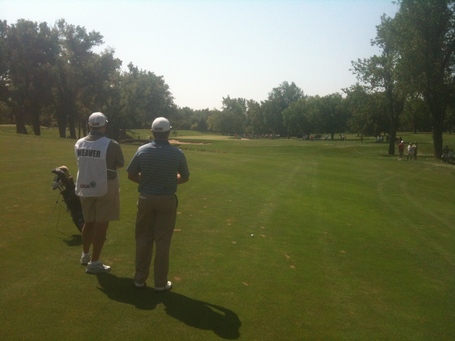 Weaver surveys his approach from the fairway. Looks like good position and a good lie! (Photo courtesy: gbruin of Bruins Nation.) 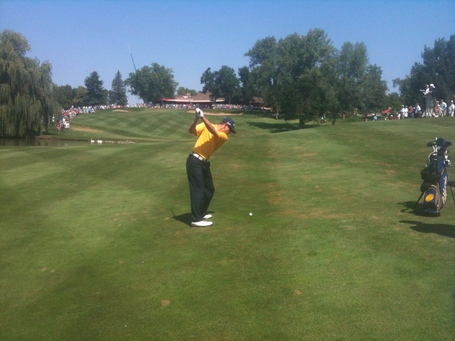 A rising senior at the University of Tennessee at Chattanooga, Fox rallied from one hole down in the middle of the second nine. He made a 4-foot par putt at the 14th to draw all square against the long-hitting Hagy and took the lead for good on the next hole with another par. Hagy, who was bidding to join his California college teammate Weaver in the final, had a bad lie in a greenside bunker at the 15th which led to a bogey.

"(Hagy) didn't miss a shot really," said Fox, who upended the world's top-ranked amateur, Chris Williams, in Friday's quarterfinals. "It was tough to make up strokes. I had nine pars on the back nine. So I really needed him to mess up somewhere, and unfortunately he did. I got lucky to win those two holes to go 1 up."

Fox, who made it to the round of 16 at this year's U.S. Amateur Public Links Championship at Soldier Hollow G.C. in Midway, Utah, wrapped up the victory by winning the par-4 18th. He used a 3-wood off the tee to get his ball in the fairway and then hit "one of the best shots of my life" by lifting a 4-iron onto the green to within 6 feet of the hole from 206 yards. Hagy's long birdie try rolled well past the hole and he conceded the hole and match to Fox. 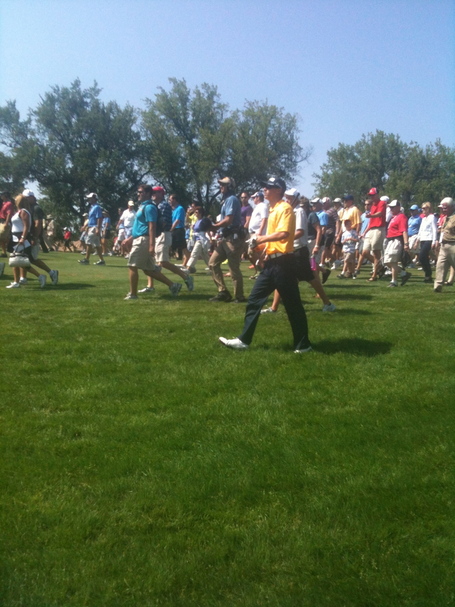 How great would it have been to see Weaver and Hagy sporting the Cal logo and colors during the championship match? It was so close to happening. (Photo courtesy: gbruin of Bruins Nation.)