Poll: What was the best Calympic moment in London 2012?

Share All sharing options for: Poll: What was the best Calympic moment in London 2012?

The 2012 Summer Olympic Games came to a close several days ago, but the highlights (Spice Girls, anyone?) will live on in our minds. Of course, some moments break away from the pack, rejuvenate your faith in humanity, and confirm the blue and gold streaming through your arteries. What was the best Calympic moment this summer? Recaps are after the jump, so vote for your favorite moment below!

The win was the first for the United States in the event since Matt Biondi in 1988, and it couldn't have been any more exciting. At the 50-meter turn, Adrian sat in third place, .04 seconds behind defending Olympic champion Cesar Cielo of Brazil. But then he came charging, putting himself into position to make his move. And with 15 meters left, Adrian did just that.

Touching the wall first in swimming isn't necessarily just luck. Swimmers are taught to line up their finishes from 15 to 20 yards out, and time each stroke, kick and movement in order to propel their bodies through the water as quickly and efficiently as possible. On the last stroke, they turn slightly on their side and stretch their right arm as far as they can directly toward the touch pad. It's a move Adrian has practiced over and over in his career. On Wednesday night, he seemed to execute it just right.

View NBC's video here.
2. Dana Vollmer's world record swim
Avi noted that on Day 2 of the Olympics, Vollmer was the first American swimmer to set a world record as well as the first woman to swim a sub-56 100m fly.
NBC's Jason Devaney writes about how Vollmer lost her swim cap during the race:

Swimmers typically wear two caps during a race – the outside one covers the straps of their goggles and makes them more streamlined. In Vollmer’s case, this makes her performance more jaw-dropping than it already was. What got her the gold medal and the world record was her turn after 50 meters – she hit the wall in third but emerged from her 15-meter underwater dolphin kick section in the lead. Then she cruised to the final wall and won by almost a second. 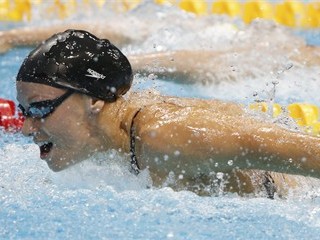 Enough said. (Not enough for you? ESPN's Jackie MacMullan calls it "pure magic," and here is the link to NBC's highlight video.)

It can't be easy, watching from the stands as other swimmers put the finishing touch on your Olympic career. But that was the role Natalie Coughlin had to play Saturday night after she was left off the 4x100 free relay final despite turning in the fastest U.S. split in the morning preliminaries, a decision head women's coach Teri McKeever, who has been Coughlin's personal coach for the last 12 years, says was the hardest she has had to make as national team coach. As teammates Missy Franklin, Jessica Hardy, Lia Neal and Allison Schmitt came in third, behind Australia and the Netherlands, in an American record of 3:34.24, Coughlin, a three-time Olympian and team captain, stayed in the stands and cheered.

Coaches and teammates have said that, in addition to contributing the fastest U.S. split, Coughlin has a certain je ne sais quoi in leading the team, and her contribution to the 4x100 free relay meant that she has won 12 medals in 12 Olympic races. What a feat! What a Bear!
5. USA Women's Water Polo winning gold for the first time

For now, there will be no more discussions of the ugly past. Only memories of a joyous night in London. After the match ended, all the Americans -- and the coaches -- jumped into the pool. They hugged, they high-fived, they fist-pumped. And then they gathered in a circle and started kicking and slapping the water to make it splash all around. 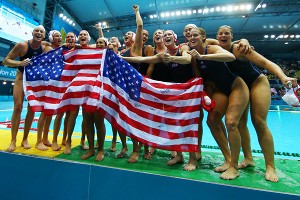 Tell us why you made your choice in the comments. GO BEARS!