TwistNHook: Look, I know what you are thinking. Are we done with football? "C’mon guys, all I ever read at CGB is this football talk. Xs and Os! BLARGH. Tight ends and Cornerbacks. UGH! How come there isn’t more science talk?????? Where’s the loner nerds I took you all to be?"

Well, disembodied voice making surprising demands upon us, you make great points! We don’t do enough science material here at CGB. And why not?????? Besides the all-encompassing disinterest in science curriculum? And the lack of science fluency in modern America? And the fact that CaliforniaGoldenQuantumMechanics.com was taken??? Well, OK, I guess that’s a fairly solid list of reasons to never talk science, really. Story’s not checking out, disembodied voice making surprising demands upon us!

But, hey, as long we’re not beating Stanford, USC, or UCLA (or Washington or Oregon State on the football field, we can at least beat them in the lab. And, yknow what, we just did! GO BEARS!

Sec119: Yes, that’s right, on May 31st, 2012, IUPAC officially announced that element 116 would henceforth be designated as Livermorium, after Lawrence Livermore National Labs. TELL US MORE, GREAT WIKIPEDIA OF THE NORTH (ASU Students, feel free to just ignore the rest of this post):

Livermorium /ˌlɪvərˈmɔəriəm/[3] (formerly ununhexium) is the synthetic superheavy element with the symbol Lv (formerly Uuh) and atomic number 116. The name was adopted by IUPAC on May 31, 2012.[4] It is placed as the heaviest member of group 16 (VIA) although a sufficiently stable isotope is not known at this time to allow chemical experiments to confirm its position as a heavier homologue to polonium.

TwistNHook: I am assured by many people that those are actual words used there.

Sec119: Join me, after the jump, to explore the Berkeley-tinged history of element 116 and the decision put forth by IUPAC, which is not the west coast campus of geographically challenged Hoosiers nor the type of PAC funded by the Koch brothers.

Sec119: Thanks to the magic of t-shirt based science learning, many of us are aware that Berkelium, Californium, and Lawrencium are elements that exist and are associated with Cal. Also, Stanford sucks my Campanile.

TwistNHook: BUT WAIT! THERE’S MORE! (Not about the Stanford sucking my Campanile part, that’s fairly straight-forward)

Sec119: In fact, all those great elements were discovered at the old Berkeley Radiation Lab, which was renamed the (Ernest O.) Lawrence Berkeley Lab shortly after Lawrence died in 1959. Lawrence was a Berkeley prof and Nobel laureate. LBL is the set of big buildings on the hill above campus, and the views from LBL are beautiful. If you are curious what it looks like from the inside, you might rent Ang Lee’s "Hulk," which was partly filmed at LBL.

Run up the middle on 1st down? HULK SMASH!!!

TwistNHook: And if you REALLY want to see what LBL looks like from the inside, you might want to rent Ernest O. Lawrence’s "Hulk," a documentary of him accidentally being exposed to Berkelium, Californium, and Lawrencium. Instead of giving him super strength, he just dies. Inside LBL. Ya, I don’t know why I wrote that joke, either. Let’s just avoid making direct eye contact and move on to the next paragraph.

Sec119: Not only did the old Radiation Lab discover the elements named after Cal, but they also discovered many more! Wikipedia tells me (also, potentially others) that they synthesized astatine, neptunium, plutonium, curium, americium, berkelium, californium, einsteinium, fermium, mendelevium, nobelium, lawrencium, dubnium, and seaborgium. Seaborg, you say? Not only did he win a Nobel Prize based on his additions to the Periodic Table, which fundamentally changed the underpinnings of modern humanity's understanding of chemistry and revolutionized the world – but MUCH MORE IMPORTANTLY he’s also in the CGB Hall of Fame! Is there anything Seaborg can’t do (besides get Cal to the Rose Bowl within the last half century or so)? And to add a little lagniappe to this smorgasbord of elements, technetium was discovered by a Berkeley-affiliated researcher visiting Italy who was using a sample taken from the Berkeley Radiation Lab. Thirteen percent of the Periodic Table is UC-related! 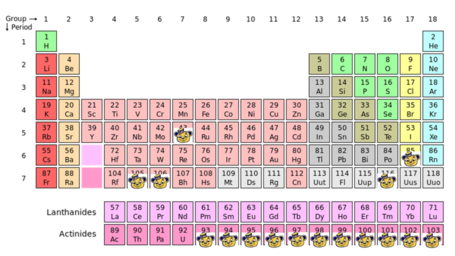 I hope you brought your calculators, there'll be a quiz later!

After WWII, Lawrence helped established Lawrence Livermore National Lab (LLNL) for classified government research. LLNL is co-managed by UC Berkeley. I know someone who works there on ‘extreme environment chemistry,’ which is another way of saying bomb research. Her research is da bomb! I instantly regret this joke. Anyway, LLNL started a collaboration with the Soviets in the 80s to discover new elements. The Soviets took a lot of data on their cyclotron, which is a massive scientific apparatus that accelerates particles to very high energies. By colliding those particles with heavy atoms, it’s possible to make them fuse into even heavier atoms, which is how the elements at the bottom of the periodic table get synthesized and discovered. So the Russians took data on their cyclotron, and the scientists from LLNL helped analyze it. Two elements got discovered this way through this collaboration, and the element discoverers got to nominate names for the newly discovered elements.

Several decades later, on May 31st, 2012, the official governing body of chemistry -- IUPAC -- approved the name Flerovium for element number 114 after Russian physicist Georgy Flyorov, and the other discovery was named Livermorium, element number 116. U-S-A! U-S-A! This is EXACTLY like Rocky IV, but, surprisingly, with less chemistry.

This is sort of the endcap to what nuclear chemists may or may not have called the Transfermium wars. During the Cold War, there was some controversy in naming rights between Western and Soviet-discovered elements. For example, LBL wanted to call element 105 Hahnium, while the Russians wanted to call it Nielsbohrium and IUPAC wanted to call it Joliotium. In the end, nobody got what they wanted and element 105 became known as Dubnium. I think the world could learn a lesson from this.

This is how names get picked for the Periodic Table

TwistNHook: Also, there was controversy in naming rights between CGB and the rest of human society. Those bastards (i.e. the rest of human society) continue to reject our attempts to rename iron as Campanilium, nitrogen as TwistNHookium, and unobtainium as ANYTHING ELSE THAN UNOBTAINIUM! So, there you go. You just learned something! And they say all blogs are uninformed speculation wrapped up in wild rumor and innuendo (THIS JUST IN: COACH TEDFORD HAS BEEN REPLACED BY THREE RACCOONS IN A TRENCH COAT WHO THEN OVERTURNED THE INDIVIDUAL MANDATE FOR BEING UNCONSTITUTIONAL! YOU HEARD IT HERE FIRST! Well, actually second....after CNN.) Cal has not only discovered Seaborgium, Lawrencium, Berkelium, Californium, and Livermorium, but also has a hand in 13% of the periodic table!

And now, let’s list all the elements that Stanford has discovered:

TwistNHook: And who could ever miss that great element discovered by Stanford, which I will now list here:

And there we go! Great job, guys. We really listed our asses off there. Solid listing! Some of the best listing I’ve seen in a long time. We made sure to get every single element discovered by Stanford. Didn’t miss a single one. Wanted to be fair to Stanford, of course!

In conclusion, the Wiki article above notes that Livermorium is a heavier homologue to polonium, which means one thing. IT’S TIME FOR "YO LIVERMORIUM IS SO FAT JOKES":

" Yo Livermorium is soooooooooo fat, its measure of magnitude of the gravitational force which is exerted by the object is quite large!

Yo Livermorium is soooooooooooo fat, it totally violates Newton’s second law of motion!

Yo Livermorium is sooooooooooooooo fat, it’s ALLL the transition metals!

Yo Livermorium is so fat, it has a lipid quadruple layer.

Yo Livermorium is so fat, its doughnut shop is Saturn.

Yo Livermorium is so fat, it sat on the Periodic Table and broke it.

Yo Livermorium is so fat, it’s more of a planet than Pluto."

Which element discovered by Stanford is your favorite?