QBs in the NFL are very smart. Aaron Rodgers is a QB in the NFL. Thus, Aaron Rodgers is very smart. If you're a defense, you have to out-smart the QB. You do this by disguising your coverages. What do I mean by disguising your coverage? You make it look like something it's not. You pretend to show X defense but you're really doing Y defense. Because if you think about it, how effective will your defense be if you show X defense before the snap, and continue to play X defense after the snap? Pretty ineffective. That QB will see what defense you're showing pre-snap, audible to something which defeats your defense, and you're screwed.

So bottom line, when you're on defense, disguise your defense!

Let's take another look at a play from Superbowl XLV and see how the Pittsburgh Steelers are disguising their defense. 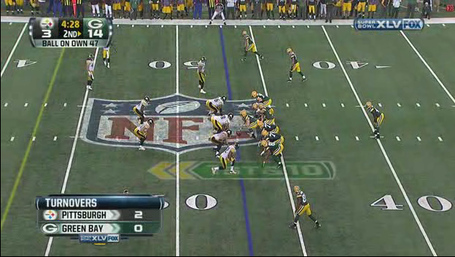 The play I want to dissect is seen above. It's the second quarter, and Green Bay is driving around mid-field. 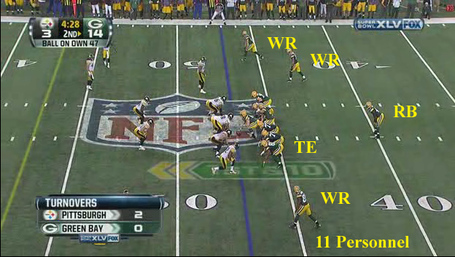 Green Bay comes out in what looks to be 11 personnel (3 WRs, 1 TE, 1 RB). Actually, it could be 21 personnel (2 WRs, 1 TE, 2 Backs) because that slot WR might be a fullback flexed out, but it's not really that important for this analysis -- and I'm just going to count that slot WR as a WR. 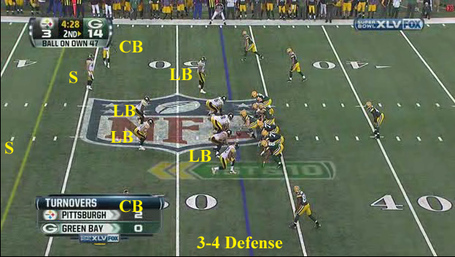 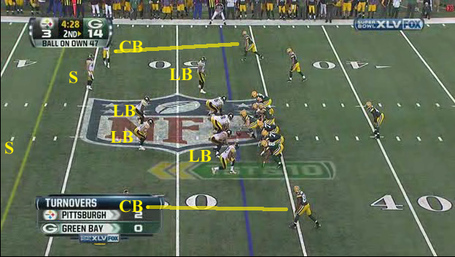 What defense is the defense showing pre-snap? Well, just looking at the CBs, it looks to be some sort of man coverage. Those CBs are lined up directly across from the WRs in a typical man coverage cushion. 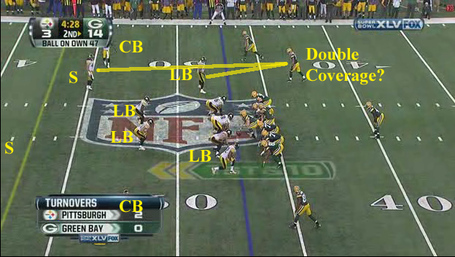 But what about the rest of the defense? What are they doing? Well, oddly enough, that LOLB (left outside linebacker) seems to be split out a little wider than he should be -- as if he's covering that slot WR.

Additionally, that safety (to the offense's right side) also appears to be a little wider than usual -- like he's moving out wide to cover that slot WR too.

Are we seeing double coverage on that slot WR??? 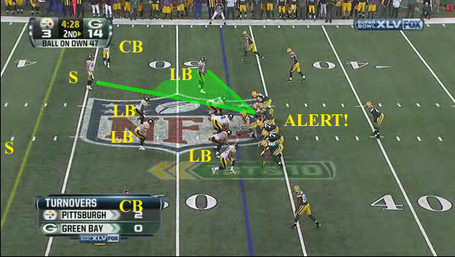 No, we're not seeing double coverage on that slot WR.

What we're seeing is the Pittsburgh Steelers doing a crap-tacular job disguising their defense. When I watched the Superbowl live, I knew exactly what they were doing before the play. And if some idiot like me knows, well you can bet your bottom dollar that Aaron Rodgers knows too.

The Steelers are blitzing that LOLB.

It's as obvious as a full moon in the night sky. 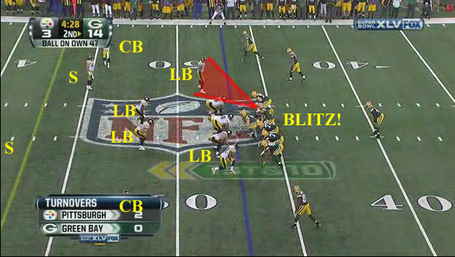 And just like me, the idiot blogger with a beer gut sitting at home shoving Doritos in his face, Aaron Rodgers sees this too. He calls it out: "LOLB BLITZ!" 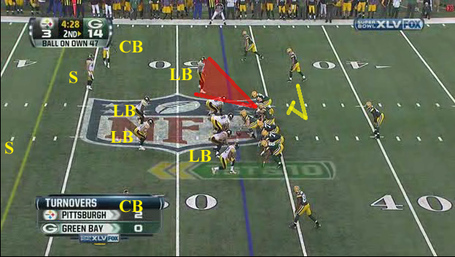 And then Aaron Rodgers calls a different play to defeat this blitz. He moves that slot WR in, into a fullback-like position, to block. 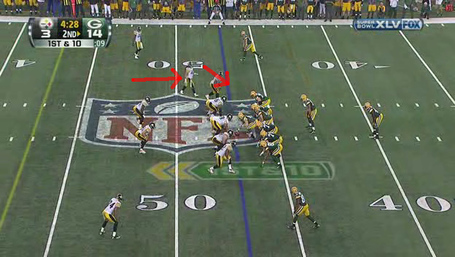 Above is the picture after the slot WR has moved into more of a fullback-like position to block. This shift in formation has caused the defense's LOLB to pinch in on the formation, and has caused the safety to approach the line of scrimmage. 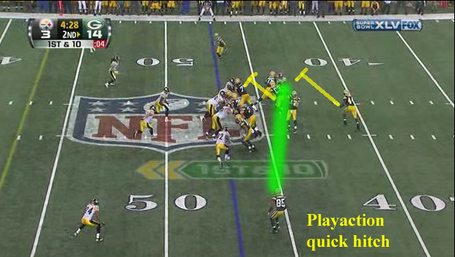 The ball is snapped! Green Bay playactions right, but Aaron Rodgers quickly throws the ball left to the flanker WR on a quick hitch. This play is basically just a quick passing play to get the ball out of the QB's hands quickly to avoid the blitz. 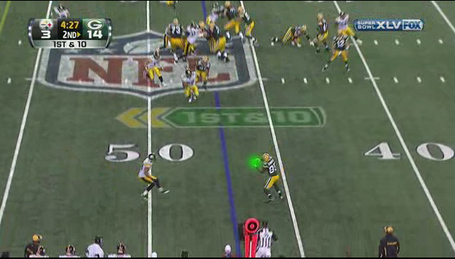 The Green Bay WR catches the ball and gets a few yards after the catch. Blitz stopped. Sack avoided. Positive gain. Good call by Aaron Rodgers.

The play in its entirety can be seen in the youtube video above. 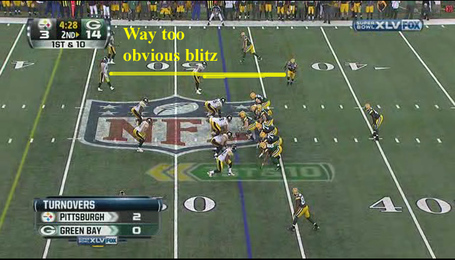 I want to go back and break things down a little more. What could the Steelers defense have done better to disguise their defense? First of all, they could try making their blitz not so obvious to see. As I said earlier, having BOTH the LOLB and Safety stack their alignment over that slot WR made it super obvious that a blitz was coming.

Why does stacking BOTH the LOLB and Safety over the WR make it super obvious that a blitz is coming?

Doing that signals that both of them are playing man coverage on that slot WR. But if you're really going to double cover a player, why make it that obvious before the snap? Why not pretend like only one defender is defending him to bait the QB, and then have that second defender come in after the snap?

Instead, the Steelers safety should have kept his alignment more towards his deep 1/2 of the field, as if he was playing the deep half in a Two-Deep defense, or Cover 2. And then, after the snap, moved over to align himself in man coverage against that slot WR. 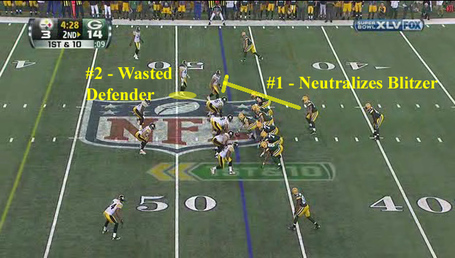 Now, I want to talk about why Aaron Rodgers audibled to the play he did, and why it was so smart.

First of all, by moving that slot WR in to block the blitzing LOLB (whether it be a run play or a pass play), he's basically neutralized the blitz. Simple. Defense is going to bring one more pass rusher than you accounted for? Then just leave one extra guy in to block him. Done.

That's two guys vs. one guy. Remember, I covered that concept in my Cal vs. Oregon posts. That's bad for the defense because that essentially makes this play 11 offensive players vs. 10 defenders (11 defenders are on the field, but two of them -- the LOLB and safety -- are covering the same player so it's really a waste of one defender.).

Get it? That's the genius of it. 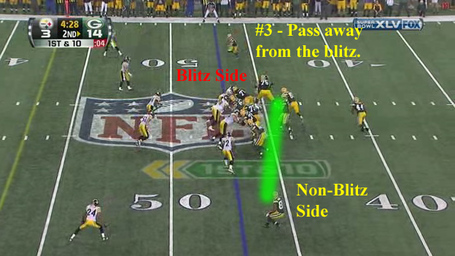 And there are a few other reasons why this audible is such a smart call by Aaron Rodgers.

Why did Aaron Rodgers pass to his left? Because it was to the side away from the blitz. Here's a snippet from my previous post in this series:

Yeah, that's true. It can work... BUT...the defense knows this too! The defense knows QBs will be looking to hit a receiver in the area from where the blitz came from, so the defense will often have defenders from another part of the field come over and fill that void created by the blitzing defender!

Aaron Rodgers, like he's done in the previous two plays in this series that I broke down, has always stayed away from the blitz. He knows that the defense might be bringing a defender in from somewhere else to fill that void created by the blitz. (And in fact, if you look at the two previous plays from this Superbowl XL analysis series, you'll see that's exactly what the Steelers did!)

In this particular play, who would that defender be? It, most likely, would be that safety who was showing man coverage on the slot WR (it technically could be anyone on the defense, but that safety is the most likely culprit). His responsibility should be to still cover that slot WR, but after that slot WR moved into a fullback-like position to (seemingly) block, who knows what that safety will do. Perhaps he'll just pass rush the QB... or maybe, and this is probably what Aaron Rodgers was fearing, he will drop back into a quasi-zone and take away the underneath pass to the WR on the offense's RIGHT side.

And so Aaron Rodgers threw LEFT. He threw away from the blitz. And away from the unknown factor -- that safety who was supposed to be covering the slot WR. 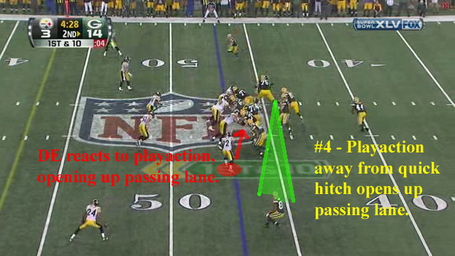 Fourth, and finally, the genius part of this play is that it's a run-action (playaction) right. The direction of the run action is significant because it goes in the direction opposite (away) from where the ball is actually going.

This is just classic misdirection football.

The ball is going left to the flanker WR to the offense's left, so the offense pretends to run right. By running right this gets the Steeler right DE (offense's left) to follow the flow of the play to his left (offense's right), which keeps a clean and clear passing lane for Aaron Rodgers to hit that flanker WR on the quick hitch.

Defenses MUST MUST MUST disguise their coverage. Not just as a whole, but individually. Each individual player has to do their part. They have to work together to show one defense pre-snap, but after the snap unveil a whole new defense. QBs in the NFL are way too smart and can easily read defenses pre-snap.

This Steeler defense did NOT do a good job on this play disguising their defense, and they paid for it by giving up an easy completion and a four yard gain.