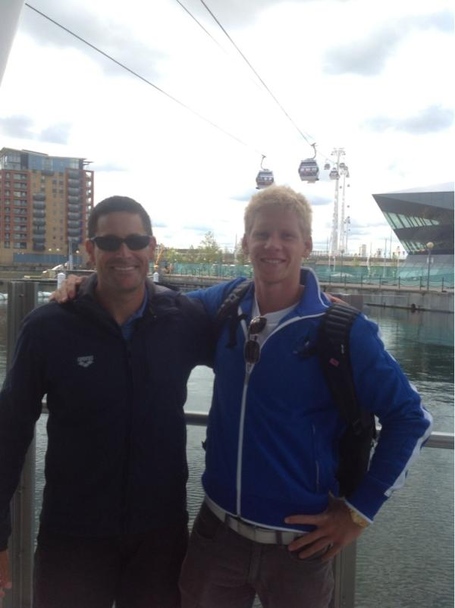 In addition to the fantastic academics and beautiful campus, a big draw for student athletes is the coaching staff we have at Cal. Coaches advise the athletes not only in their athletic training, but are a key component of team morale as well. Today, we learn about Associate Head Coach Greg Meehan, in London this summer with Estonia for the 2012 Summer Olympics. He was promoted to his current position after being on the Cal staff for four years, but before that, he also coached at University of the Pacific, UCLA, Princeton, and William & Mary. From his Twitter, it is apparent that he has a strong rapport with the students; he Tweeted the above picture with Calympian Martin Liivamagi when they met up in London. After the jump, find out about the impact Meehan has made in the swimming world.

On his Twitter, Meehan gives shout-outs to his swimmers:

@graemeswim has been spotted in London. Martin finally has someone else to talk with! twitter.com/roll_on_cal_sw...

@GuyBarnea You will be missed!Thank you for helping Cal Men's Swimming be a better program now than it was when you arrived. #champions

The care he shows for the students he guides manifests itself in the success he's seen coaching, as Cal Athletics shows:

Greg Meehan, in his fourth season with the Golden Bears, was promoted to Cal's Associate Head Men's Swimming and Diving Coach in September, 2011. The promotion was well deserved as in Meehan's three seasons with Cal the Bears have produced national runners-up in 2010 and NCAA champions in 2011. He has also helped coach Cal student-athletes to 17 NCAA titles, including seven relay crowns.
Prior to joining David Durden's staff in April 2008, Meehan was the head coach for both the men's and women's swimming programs at the University of the Pacific. He has now been a part of what is arguably one of the greatest runs in Cal men's swimming history.

He also has experience coaching teams that draw from all over:

At the international level, Meehan served as a manager for the United States team that competed in the 2007 World University Games held in Bangkok, Thailand.
...
In the summer of 2003, Meehan served as assistant coach for the USA Swimming National Distance Camp at the USOC Training Center in Colorado Springs, Colo., mentoring the top young male and female distance swimmers from around the country.

It must help that Meehan himself was a competitive swimmer:

A graduate of Rider University in Lawrenceville, N.J., Meehan earned a degree in mathematics and secondary education. While at Rider, he competed in the 200 backstroke, was a member of several MAAC conference champion relays and was a four-time All-Academic Award recipient.

Coordinating swimming with family, his sons are featured in his NCAA trophy profile picture! Make sure you let him know that the Cal family also appreciates all that he does! Tweet him ‏@roll_on_cal_swm and GO BEARS!