It's time for the second round of the California Golden Blogs Hall of Fame! Our first round featured a couple of huge upsets, with a 16 beating a 1 and a 15 taking down a 2 in a runoff. What kind of madness will this round bring?

Our first match-up here features two great Cal running backs, Russell White and Shane Vereen. White is a Golden Bears legend and got to this round by eviscerating Bobby Shaw. Vereen is a fan favorite by virtue of his 2009 Big Game performance but also had a solid career with the Bears. He advanced by easily taking down Troy Taylor.

This match-up comes out of the Pete Newell Region and the winner will move on to face the winner of the Joe Igber/ Nathan Adrian mat-up in the third round. You can take a look at the whole bracket here and see how things stack up for your favorite Golden Bear. The full write-ups are after the jump and voting will end on Friday. GO BEARS! 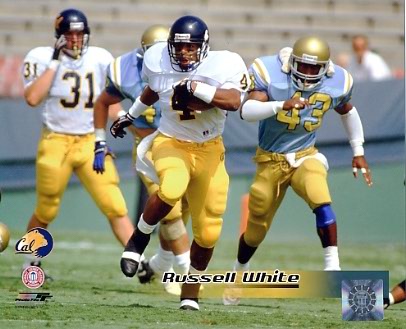 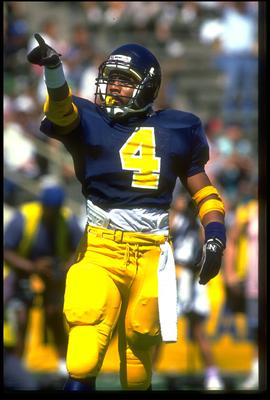 Kodiak: Took it to the house on a 100yd kickoff return first time he touched the ball in a Cal uniform.
Had some crazy reverse-the-field oh-no-he-didn't runs that were Marshawn-esque before Marshawn.
Put up huge #'s while still sharing the ball with another 1000-yd rusher (Anthony Wallace).

Freaky athlete. He hurdled a guy once and got penalized for it...because the guy was still standing. (yes, not diving, not tackling, not kneeling/crouching.)

For you younguns: A little taller/faster than Forsett, similar vision. Not quite as powerful as Marshawn, but similiar wiggle/athleticism.

He would also go on to become Cal's all-time leading rusher, behind 1,000 yard efforts in 1991 and 1992. Fifteen times he rushed for at least 100 yards in a game, including a 229-yard effort in Cal's record setting 52-30 beatdown of USC in 1991. With White, the Bears reversed a decade of futility and won back-to-back bowls in 1990 and 1991. His '91 season, with 1,177 yards rushing and fourteen touchdowns earned White first-team All-America honors from the Walter Camp Foundation and the FWAA.
Now thanks to Prd74, we all get to bask in Russell's greatness a little; his freshman campaign in 1990 had some great moments, including a 99 yard kickoff return against Miami in the first video and an utterly insane run starting at 4:24 in the second vid. 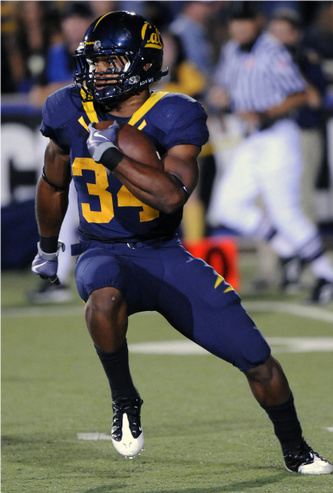 Royrules22: "This guy carried the ball 40+ times against a top-10 Stanfurd team on the Farm and helped us pull of a monumental upset. That alone makes him deserve this."

TwistNHook: Shane Vereen might be the most interesting runner of the Tedford era. He always had Jahvid Best ahead of him, but in the tail end of 2009 and 2010 managed to show why there was no real drop off from Best to Vereen.

Watching the game in person, you didn't really have an opportunity to reflect on how amazing a day Vereen had. He took the ball every which way, including multiple Wildcat options. He scored 3 TDs and willed Cal to victory that day.

Berkelium97: My fondest memory of Shane Vereen will always be the legendary 2009 Big Game. But my first memory of him was the Michigan State game in '08. I was quite excited to see him play in his first game--particularly since he played high school a couple miles from where I grew up. In fact he was one of the highest recruited players ever to come out of Valencia High School, so I was really looking forward to seeing him hit the field. Anyway, back to 2008. Throughout the second half of the game, it seemed like Cal was never quite able to put the game away. With just under 5 minutes to go, Michigan State once again made it a one-possession game. Best returned the kickoff, so Vereen was the RB sent out for Cal's play on offense. I remember thinking that all we had to do was burn the clock. A five-minute drive would seal the game and certainly seemed possible. Vereen, of course, had other plans. He didn't burn the clock. Instead, he burned the entire Michigan State defense with an 81-yard run that sealed the victory. It was clear after that day that we had a lightning and lightning combination at running back--two guys who were capable of breaking free on any given run.

Four weeks later Vereen gave us a first glimpse of his incredible durability--a trait we often felt was lacking in Best. Against ASU Vereen ran the ball 27 times and caught 5 passes. In his entire career at Cal Best never topped 27 carries. Vereen did it in his first start and kept the offense chugging along. Vereen was an excellent complement to Best because he could take a pounding and still churn out yards. The Best-Vereen tandem might have been the best of the Tedford era, thanks to the unique combination of skills they had.
Solarise: Shane Vereen off the field is just as impressive as his accomplishments on the field. He spent a summer interning at CSN Bay Area and earned lauded praise for his maturity and work ethic:

More than a star player on the field, Shane Vereen was the epitome of a Cal student athlete.