We made it! This is our final match-up of the first round of the CGB Hall of Fame tournament. Well done everyone. And we finish out our initial voting with two footballers that made their marks in their respective eras.

Mike Pawlawski led the Bears for the early 90's resurgence and led them to their last New Year's Day bowl win. Everyone (me included) that remembers those teams fondly definitely has a great respect and love for Mike.

Justin Forsett took over for Marshawn Lynch and many wondered if he could carry the load. He answered with a resounding yes and turned in a huge season for the Golden Bears.

I think that this will be a pretty close vote but I'm giving the edge to Pawlawski because of the New Year's win. The winner is going to move on to face the winner of the Marvin Jones/ Nick Harris vote in the second round. You can take a look at all the upcoming second round match-ups here. The full write-ups are after the jump and voting ends on Friday. GO BEARS! 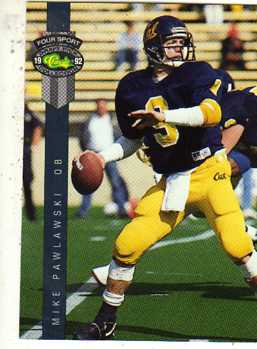 The old-timers remember him and the team he led quite fondly, perhaps in the same way the younger minds remember Rodgers and 2004. Pawlawski was Cal's starting quarterback in 1990 and 1991. The 1991 team went 10-2 and won the Florida Citrus Bowl against ACC champion Clemson-Cal's first appearance in a New Year's Day Bowl since the 1959 Rose Bowl game. Pawlawski had an outstanding 1991 season, winning co-Pac-10 Offensive Player of the Year honors with Washington WR Mario Bailey. And Pawlawski's 1990 team went 7-4-1 with a win in the Copper Bowl (nka the Insight Bowl), which was Cal's first bowl appearance since the 1979 Garden State Bowl.
LeonPowe and California Pete offer their thoughts on Pawlawski and the 1991 team he quarterbacked-

LeonPowe: Quarterback for the 1991 Citrus Bowl Championship teams. Coming out of high school he had no arm strength, no accuracy and was rated by one recruiting service as "the worst recruit in the Pac-10"
Damned if he didn't will and win his way to becoming the Pac-10 offensive player of the year in 1991. And this was with a UW team that won the National Championship. I really dislike attributing stuff like "intangibles" and "leadership" - because good players usually prove themselves in some measurable way. Mike really didn't - he had okay stats and won a lot. But it was the little things. Like when he scored on a keeper and knocked out the opposing linebacker. Like when he played special teams to get on the field. Like when he took an offense full of talent (Russ, Brian Treggs, Mike Caldwell, Greg Zomalt, Lindsay Chapman) and molded them in his image - they became a cocky, loud-mouthed, trashtalking offense that WON. Back-to-back Bowl Games (huge for Cal at the time).
In my freshman year after Pawlawski had graduated a lot of fans and students said (not jokingly either) that they should bring Pawlawski back . . .to coach the linebackers.

California Pete: I think the 1991 team would have a great chance against the 2004 team, although the 91ers' penchant for personal fouls probably would do them in. Both teams were Rose Bowl worthy . . . but both unfortunately shared the conference with two of the all-time greats: UW 1991 and USC 2004.

You can check out his write-up on Tightwad Hill over here and then take a look at these great videos of the 1990 team! 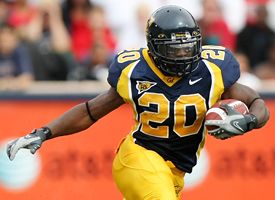 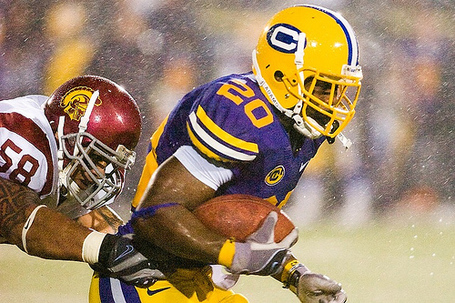 Just fine, thank you very much. Forsett rushed for 1,546 yards and 15 touchdowns as a senior, which led the Pac-10 and tied for the best single-season total in Cal history. On top of all that, Forsett was a second team Pac-10 All-Academic selection. Forsett finished his Cal career with 3,220 rushing yards and was a valued member of teams that won 35 regular season games and three bowl games. These days, he is a member of the Seattle Seahawks.

1) He's a great all-around guy: ALL fans love him. Great work ethic, high character, good morals, never got in trouble and patiently waited behind Marshawn without bitching about it. There are so few heros in life, but he's one of them.
All his life he's been told about the body he doesn't have... the speed he doesn't possess... to accept that he wouldn't go far... and he said to all of them... "F*** that, I don't give a shit what you think!!" (Actually, he probably would've have said, "Excuse me sir, I beg to differ" but...). To make it even more improbable, Ty Willingham yanked his only D-1 scholarship at the last minute, but he still became a star at Cal... I bet Ty is sorry now. His story is downright inspirational and I demand a movie be made about him immediately! Hey Hollywood, cancel that sequel you're about to make and do this instead: The Truth Laid Bear: The Justin Forsett Story. But if it shows up on Lifetime I'm going to F*ing kill you guys.

2) He's the son of a preacher man: And so am I. PKs (pastor's kids) don't have what you would call 'normal' upbringings. Pastors are incredibly strict with their kids because the kids' behavior reflects on the Pastor and the church itself. There are only two varieties of PKs... the ones that grow up to be upstanding role models in their communities and the 'rebels' who embrace all evil (I'm the latter). In short, it's tough to grow up as a PK and PKs the world over have somewhat of a kinship that grows from that. "Genesis says don't be spilling no seed"