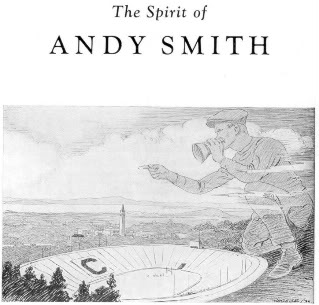 Tribute to Andy Smith in the 1926 Big Game program. (HT calbear81 for the photo)

Andy Smith is arguably -- if not indisputably -- the greatest coach in the history of Cal football. The legendary Smith compiled a 74-16-7 record as Bears coach, won five Pacific Coast Conference championships and four consecutive national championships, and led the Bears to two Rose Bowl appearances in the 1920s. During his time at the helm, he also led the Bears to five straight undefeated seasons.

Smith was taken from this Earth way too soon, passing away in January 1926 at the young age of 42. Nearly two years later, on December 31, 1927, his players unveiled the Andy Smith Bench before Cal's football game against the University of Pennsylvania, where Smith also coached during his career. Until California Memorial Stadium closed for renovation in November 2010, the 42-foot long, nearly nine-ton granite and teakwood bench remained situated behind the Cal sideline, in front of the Cal student section. It was a fitting tribute to a man who led Cal to football success that the program has yet to match in the 86 years since his death.

Earlier this month, Anton Malko wrote about the Andy Smith bench on calbears.com, calling particular attention to the bench's new location this coming season at the renovated Memorial Stadium:

A historic element of California Memorial Stadium currently lies in storage, patiently waiting for its triumphant return to a new location that will put it in literal touch with the Cal faithful.

The Andy Smith Bench has been a lasting tribute to the legendary coach who led the Golden Bears to four national championships, five Pacific Coast Championships and two Rose Bowls between 1916-25. Smith's squads included the famous "Wonder Teams," which won 50 straight games from 1920-24.

Originally commissioned by a committee of his former players, led by 1920 captain Cort Majors, the Andy Smith Bench was placed on the home sideline on the east side of Memorial Stadium at the end of the 1927 season. Eighty-three years later, it was stored for safekeeping when the stadium's renovation commenced at the end of the 2010 season.

When it returns to Strawberry Canyon at the end of the summer, the Andy Smith Bench will command a new location outside the north entrance of the stadium, where fans will have access to it on game days and every day as a feature of the campus park being created there.

For decades, the bench has sat right behind the Cal sideline. Now, it is being moved to the north entrance of the stadium where everybody and anybody can sit on it. Is it a good idea to move the Andy Smith Bench? Is it good to get people more involved with the bench? Will it lead to vandalism? Is it destroying tradition???

Your CGB writers and editors chime in on this subject after the jump. 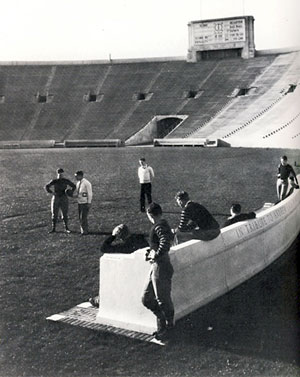 ragnarok: Honestly, I always felt like the bench was a little anachronistic in its previous location -- it was hardly ever used or even noticed, a relic of a different era of football. I like this move, and think it will lead to more use and more remembrance of Andy Smith.

Hydro Tech: I think that while the Andy Smith Bench was never really used in the old Memorial Stadium, that moving it outside the stadium isn't really a good idea either. I'm pretty sure it'll get defaced fairly quickly by opposing fans and taggers.

Cugel: There was a long discussion about possible vandalism in my 100 days piece, I find that claim rather dubious at best. I think this is a good move.

Kodiak: I believe the suggestion made was to have the bench covered and locked during the week. On game days, it can be uncovered and have shifts of either Rally Comm and/or stadium security watching over it.

LeonPowe: Is it really any more or less vunerable to all of the other special sculptures and statues on campus? How often does the football player statue down near the westside of campus get defaced? Or the statue of Pappy Waldorf? Are people coming up and tagging OTHER parts of Memorial Stadium? I don't see what the Andy Smith bench would be MORE vunerable to vandalism than any other cool storied rememberance on campus or near the stadium.

The vandalism seems to me a non-issue.

"Winning is not everything and it is far better to play the game squarely and lose than to win at the sacrifice of an ideal."

Ohio Bear: The vandalism issue is secondary to me. I just don't see the reason to move the bench from its traditional location. This is like Georgia moving the hedges, Clemson moving Howard's Rock, Michigan moving the "Go Blue" sign, or Notre Dame moving the "Play Like a Champion Today" sign. Would those things be moved? No. The Andy Smith bench is an on-field tradition and should remain that way.

Berkelium97: I agree with ragnarok and HydroTech that moving the bench is a good idea. I never really noticed the bench in its old location. Moving it to a more accessible location should help educate fans about the legacy of Andy Smith.

I strongly disagree with moving it outside the stadium, however. As has been previously stated, moving it outside will expose it to likely vandalism and defacement. I would be absolutely shocked if it survives Big Game week without being painted red or otherwise defaced. I was hoping they would move it to a more accessible location in the stadium or perhaps somewhere in SAHPC where fans can see it during tours. It will be nice to see it getting more exposure, but I'm afraid it will get a little too much exposure (and not the right kind) at its proposed location.

Cugel: Ok, this viewpoint I can agree with.

What viewpoint do you agree with, CGB readers? Should the Andy Smith Bench go back to its traditional location? Or is it a good idea to move it for better accessibility to Cal fans? Tell us what you think in the comments.