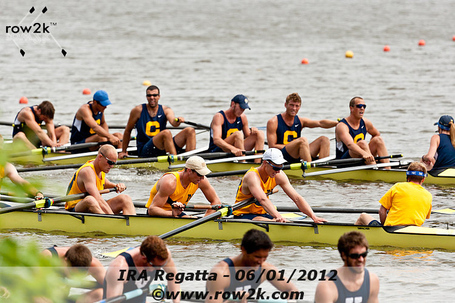 With Men's Golf, Rugby, and Softball all to come later, Bearathon™ kicks off on Saturday with the Cal Men's Crew competing for a National Title. All 5 Cal boats have advanced to their respective Grand Finals. On Saturday, the Freshmen 8 and the JV 8 both won their semifinal heat. Open 4 already advanced to the final by winning on Friday. Varsity 4 finished 2nd behind Washington (they are apparently pretty good...adding to the whole boat/U-Dub/hatred connection). Varsity 8 eked out the last semifinal spot by finishing 3rd in their heat. Click CalBears.com for the more details.

While the 4th ranked Varsity 8 Cal squad has not won a race yet, today is the one that counts.

The Cal boats consist of: