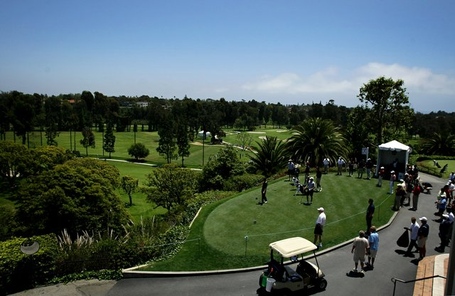 Cal lived to play Riviera for a fifth straight day in the NCAA Championships. Can the Bears earn the right to play one more day for all the Tostitos?

The Cal men's golf team kept its chase for the national championship alive on Friday with a 3-2 match play victory over San Diego State in the quarterfinals of the 2012 NCAA Men's Golf Championship at the Riviera Country Club in Pacific Palisades, Calif.

It was the bottom of the Bears' lineup that got the necessary points to win the match. In the first two matches, Cal's Max Homa and Brandon Hagy each held early leads against their San Diego State opponents. Homa held a 1-up lead through the front nine, but couldn't hold it, as SDSU's J.J. Spaun won the 10th, 11th, and 12th holes and never looked back on his way to a 4 and 3 win. In the day's second match, SDSU's Colin Featherstone fell behind early to Hagy, but pulled even at the 6th hole and went ahead for good at the 9th hole. Featherstone defeated Hagy 2 and 1.

The rest of Cal's lineup got it done, however. In the third match, Cal's Pace Johnson won the first two holes against Matt Hoffenberg and was never threatened, cruising to a 4 and 3 win. Freshman Michael Kim got Cal another point in the fourth match, overcoming a two-hole deficit on the front nine. Kim took the lead at the 7th hole against SDSU's Tom Berry and eventually extended to a 3-up advantage through 12 holes. Kim went on to a 3 and 1 win, setting the stage for the match-deciding contest between Cal's Joël Stalter and SDSU's Alex Kang.

The Stalter/Kang match was a see-saw affair that saw Kang lead for five holes on the front nine before Stalter won the 9th hole to square the match. Stalter pulled ahead by taking the 11th hole, but Kang squared the match with a birdie (to Stalter's par) at the 14th hole. Kang, however, faltered with a bogey at the par-3 16th, which enabled Stalter to take a 1-up lead with a par. Stalter finished Kang -- and the Aztecs -- by rolling in a 20-foot birdie putt on the 17th green to win the match 2 and 1 and send the Bears to the semifinals.

The win gets Cal -- the #3 seed coming into the NCAAs -- a matchup with # 2 seed Alabama, which won the stroke play portion of the event and defeated Kent State in Friday's quarterfinals. The match tees off at 10:00 a.m. PDT. Texas and Oregon will play in the other semifinal match, beginning at 10:45 a.m. Texas defeated Washington and Oregon defeated UCLA in their respective quarterfinal matches.

Use this as your open thread for today's semifinal as the Bears try to make it to tomorrow's championship match. After the jump, see video of Stalter's winning putt and all of the tee times for today's action.