It is the final weekend of the wild first round for the CGB Hall of Fame. A number one seed has gone down and a two seed went down in a runoff, so who knows what this weekend will produce?

This match-up comes out of the Joe Kapp Region where the winner is going to move on to face Wesley Walker. You can look at the full bracket here. The full write-ups are after the jump and as always, the voting will end on Friday. GO BEARS! 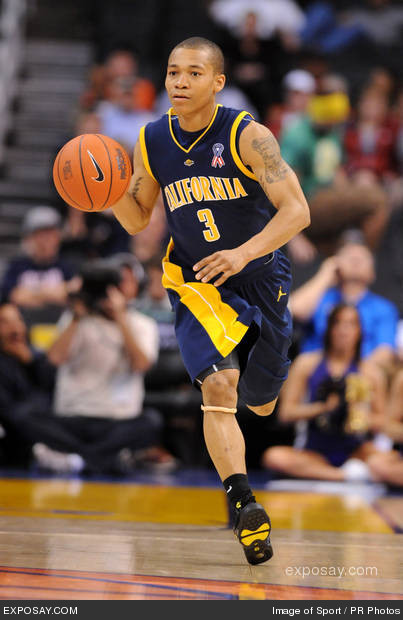 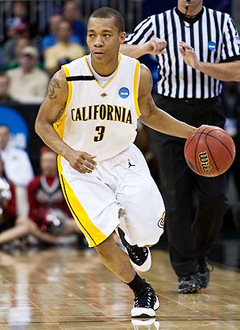 I talked a little about Randle in our Remembering the Seniors post.

Randle's evolution as a player was remarkable. When I first watched him sophomore year I cringed watching him run the offense. I don't play much basketball, but when I do I'm usually the point guard, and the things Randle did are NOT things that would make my teammates happy. The shots themselves weren't that bad. I'm guessing if he was taking them in the first place he was hitting them in practice, and the next two years proved he could make those shots.

No, it was the lack of ball movement and inability to get the ball to the bigs that really exasperated me. The process of watching our plays developed was chaotic, and not in an enjoyable Nellie-ball sort of way. You could see the team unravel during conference play as they ran into smarter and more efficient teams. That's the point guard mantra--run the offense, make your teammates make happy. Bad point guards lead to bad teams, and that was what Cal was in 2008.

(The most curious thing was that Randle and Ryan Anderson never really gelled. Although people opine what would've been if Ryan had returned for a year (or two) with Monty, Jerome probably would've left as he was already on the fence after the Braun firing, and we'd have probably had two years of Nikola Knezevic running point guard. Think we're Pac-10 champions this year if that happens?)

His maturation was exceptional under Monty though. First he got the alpha dog streak as the team's on-the-court leader in his junior campaign. That he went from an inconsistent shooter shooter to one of college's most efficent offensive players (53rd in the nation in 09) in a year without great bigs to set picks for him lends credence to Montgomery's teaching methods. Amazing what putting a system in place does for good players.

Second, his endurance for a guy his size was exceptional. He played an average of 35 minutes the past two seasons, and that's including blowouts. And it wasn't like the guy was taking plays off either--he handled the ball on over a fourth of our possessions the past two seasons. It not only underscored the importance of Randle, but the faith Monty had in letting him play those long minutes. It wore him out last season, but his performances were solid from beginning to end this year.

Finally, he embraced his teammates and ran with them as they ran with each other. Although his 2009 campaign was more spectacular than his 2010 season, I felt he played even better this year. He sublimated his individual talents in search of the team goal, which was the conference crown. The final stretch of the Pac-10 season (where they won nine out of their last ten games) was perhaps the best basketball he ever played as a Bear. He stepped up when they needed him, he stepped aside when others were ready to carry the load. And they got that conference ring. 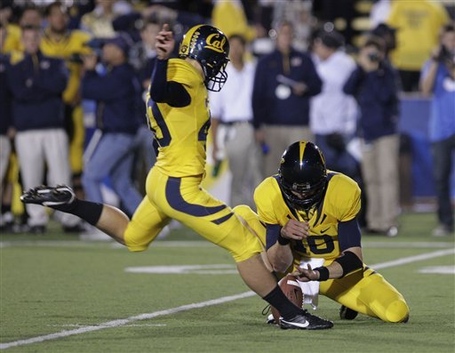 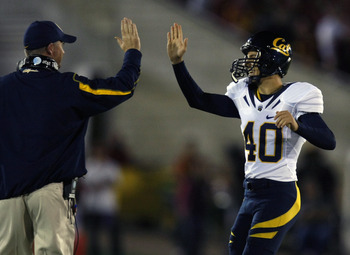 It's tough to think of a player in recent memory that has been as alternately praised and maligned as Giorgio. He made some huge kicks and nailed field goals that seemed totally out of his range, and then missed chip shots and XP's. To say that those attributes made him polarizing would be an understatement. However, in spite of all of the talking about his job security, Giorgio seemed to just go about his business and steadily improved to turn in a good senior year. There were still some miscues for sure, but for the most part, you could count on 3 points when Giorgio lined up for a field goal.

I know that I will miss seeing his unique pre-kick twist routine, and his joy at making each field goal, no matter the situation. And while he was not the biggest guy on the field, I always appreciated his willingness to try, and sometimes successfully, make a tackle on a kickoff return.

Giorgio may not have been automatic and had the smoothest ride as a Cal kicker, but the positives definitely outweighed the downsides and he will be missed.

Via the Calbears.com Salute to the Seniors:

"God knows how I got to Cal and God knows where I will go in the future, but one thing is for certain- my time here has been incredible. From the times of struggle, whether it was on or off the field to the times of success, I cannot believe the experiences that I have been a part of. For this, I have to thank the Cal football program for giving me this unbelievable opportunity, thank my teammates for making it so memorable and thank my family and friends for sticking with me through it all. "Tanto, se tutto va bene siamo rovinati!" I truly lived the dream...God Bless and Go Bears!"