Everyone knows that Aaron Rodgers is probably the best Cal QB ever, and one of the best QBs in the NFL right now. Why is he so good? Besides his cannon arm, and extreme accuracy, he's also a very smart QB. Smart QBs are able to decipher what defense the defense is playing -- not just after the snap, but BEFORE the snap. These are called pre-snap reads.

What are these pre-snap reads? These reads are executed by the QB. He's looking for indicators, or clues, in the defense's personnel, formation, or movement which is tipping off their hand as to what defense they will be playing. A lot of times it's a combination of all those various factors which tip off a QB as to what the defense will be. 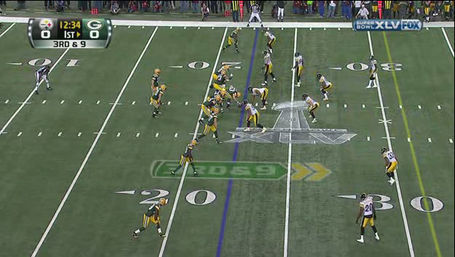 The above picture is from Superbowl XLV. The Green Bay Packers are playing the Pittsburgh Steelers. It's the first quarter, and the Packers are facing a 3rd and 9 in their own territory. 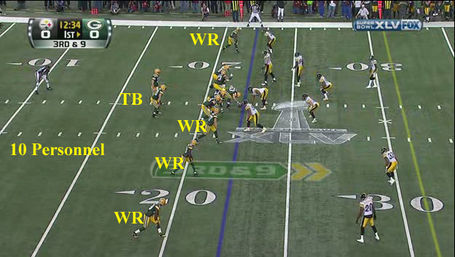 The Packers have (what looks to be) 10 personnel out on the field. They have four WRs, zero TEs, and one tailback. This is clearly a passing personnel set which makes sense since the Packers are facing a passing situation.

What formation are the Packers in? They're in shotgun with trips to the right ("trips" is 3 WRs) and the tailback to the trips side of the field. 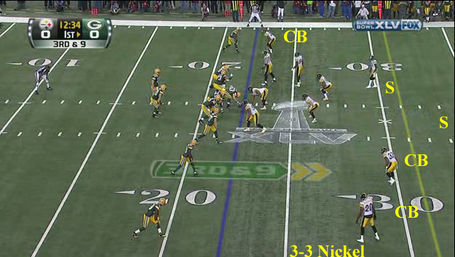 The defense counters with what appears to be a 3-3 Nickel defense. They have five defensive backs on the field (3 CBs, and 2 safeties), three linebackers, and three defensive linemen on the field. Note that the second safety is off the right side of the screen. 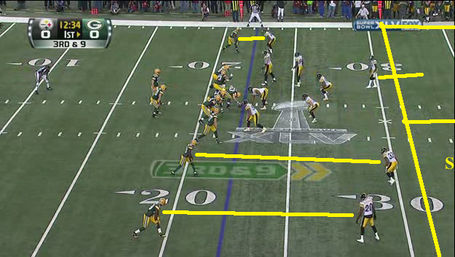 What defense is the defense playing? From the pre-snap read, it looks like a 2-Deep Man Over concept. This is a defense with two deep safeties splitting the deep half of the field, and the cornerbacks playing man coverage over their responsibilities (as opposed to under). 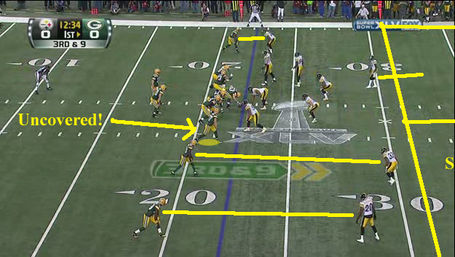 You should note though, that this defense seems to have left the inner slot WR uncovered! I've drawn a light yellow circle underneath that WR.

There is no doubt that Aaron Rodgers has noticed this. 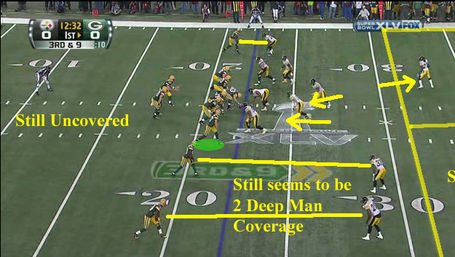 Here's another picture of the play before the snap of the ball. Two of the Steelers linebackers have started moving towards the line of scrimmage showing blitz. The deep safety to the offense's left is also dropping back into coverage. Still, nobody is covering the inner slot WR (the guy with the green circle under him). The coverage still looks to be a 2 Deep Man coverage concept. 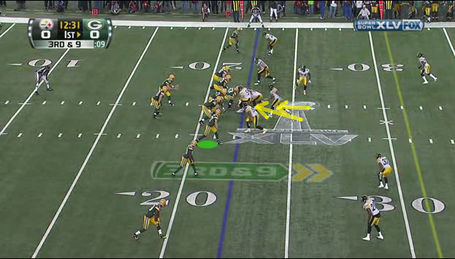 Here's the final pre-snap picture just before the ball is snapped. Again, you can see the two Steeler linebackers showing blitz along the interior of the offensive line, and nobody covering that inner slot WR.

Again, there is no doubt that Aaron Rodgers noticed this. 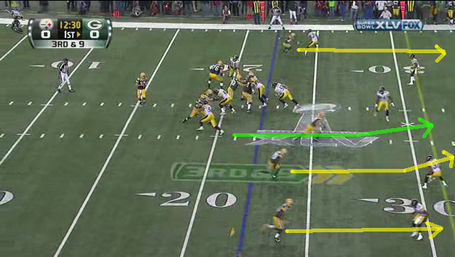 Here's the picture of the play post-snap. Rodgers drops back to pass. The WRs are running a "four verticals" play where they all pretty much run straight down the field (the two inner slot WRs will bend their routes inward though, essentially running seam routes or skinny posts).

I've highlighted the inner slot WR's route in green. He's the guy who was uncovered pre-snap. Aaron Rodgers is going to pass to him, right??? 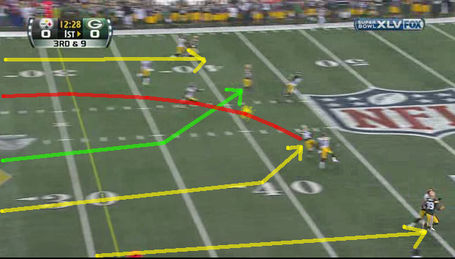 Aaron Rodgers passes the ball (the red line) to the middle slot WR! 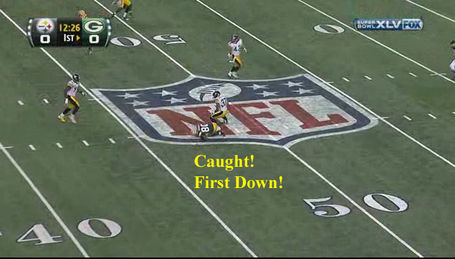 It's complete for a first down! 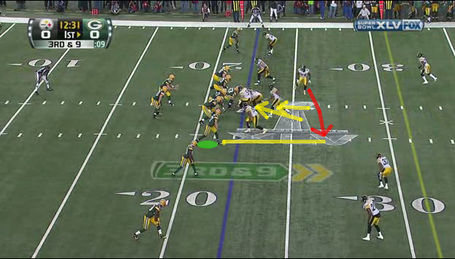 Why didn't Aaron Rodgers pass the ball to that inner slot WR who appeared to be uncovered all pre-snap? Because he wasn't uncovered. In fact, he was covered!

The Pittsburgh Steelers disguised their coverage. They actually had their right outside linebacker (ROLB) playing man coverage on that inner slot WR. Just AFTER the snap of the ball, that ROLB moved across the formation to play man coverage underneath that inner slot WR! I've shown this movement with a red arrow, above. 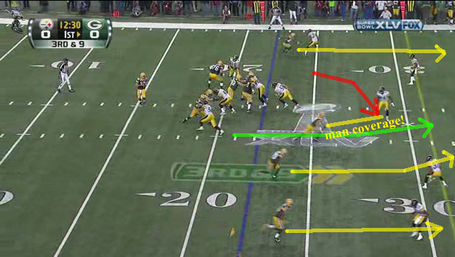 Here's another picture of the play after the snap of the ball. Here you can clearly see that ROLB rolling across the formation to cover that inner slot WR and take away the quick blitz-beating pass. That is why Aaron Rodgers didn't pass the ball to that inner slot WR despite being uncovered the entire time before the snap.

This play, in its entirety, can be seen in the youtube video above.

Part of developing a great pre-snap read involves watching film of the defense. There is no doubt that prior to the Superbowl Aaron Rodgers watched a lot of Steeler defense film. In fact, he probably saw them play this coverage before. Aaron Rodgers probably knew that they would attempt to "bait" him into throwing that quick blitz-beating pass to that inner slot WR. If you think about it, it all makes sense why a QB would WANT to throw that quick pass to the inner slot WR. Why? The defense was blitzing. They sent five pass rushers at the QB (3 defensive linemen, and 2 blitzing linebackers). The QB is expecting quick pressure, and needs to get the ball out fast. The easiest way to get the ball out fast is to pass it to the guy (the inner slot WR) who is not covered and is nearest the void created by the blitzing defenders. And of course, this is what the defense wants. The ROLB would be right there to either deliver a huge hit on that inner slot WR, or would intercept the ball. But Aaron Rodgers anticipated all of this prior to the snap and threw the ball elsewhere, somewhere he knew there wasn't a trap waiting for him.

This was an excellent pre-snap read by Aaron Rodgers, and an excellent example of the chess match between a defense and the QB.

Disclaimer: I'm not an expert. Rely on the above analysis at your own risk.