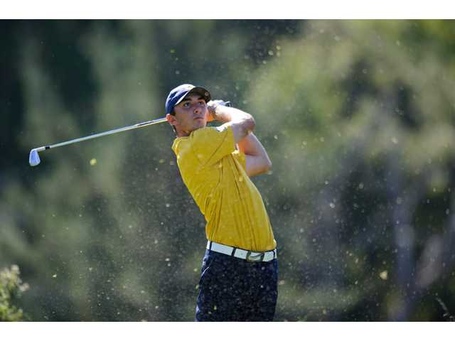 Max Homa shot Cal's best round of the day on Thursday, a 3-under par 68, to help the Bears secure a spot in the match play portion of the NCAA Championship.

The Cal men's golf team is still in the hunt for the second national championship in program history.

Needing a solid team performance in the third and final round of stroke play competition on Thursday at The Riviera Country Club in Pacific Palisades, Calif., the Bears got it. Cal's top four scores resulted in the Bears' best round of the tournament (287, +3) and the Bears finished the third round in a fourth-place tie with San Diego State at 19-over par for the stroke play portion of the championship. Only Alabama (+7), UCLA (+9), and Texas (+17) scored better than Cal over the first three days of competition.

This is your open thread for today's match play. Live video for today's action is available at ncaa.com beginning at Noon PDT. (Live video of the playoff between Florida State and Kent State for eighth place is also available at 8:00 a.m. The winner of that playoff will take on Alabama in match play.) Click here for live scoring throughout the day.

See a recap of Cal's Thursday third round, today's match schedule, and the stroke play results after the jump.

The Bears began Thursday's play in five-way tie for eighth place and needed to finish the day no worse than eighth in order to advance to match play. Starting on Riviera's back nine, the Bears were buoyed by Max Homa's eagle at the par-5 12th hole on the way to a run that saw the Bears vault to as high as 3rd place after the turn. At one point, Cal stood six shots clear of eighth place. All the more remarkably, the Bears , did this with their best golfer through the first two rounds, Brandon Hagy, struggling to a 4-over par start on the first (back) nine. Hagy eventually pulled it together after the turn (he shot even par on the second nine), but his was not one of the top four scores that counted for the Bears: those belonged to Homa (68, -3), Pace Johnson (72, +1), Michael Kim (73, +2), and Joël Stalter (74, +3), who started well and held up under pressure toward the end to keep Cal alive for the title.

Cal's day wasn't without tense moments. Just when it looked like the Bears might cruise to the next round after Homa birdied the second hole (his 11th of the day), the team went on a birdie drought, not making another one until Johnson birdied the par-4 8th hole. As the Bears were playing the final four holes, Cal hovered between sixth and seventh place and fell to within only one shot of the multiple teams fighting for eighth place. But Cal righted the ship, playing the final two holes in 1-under par as a team (seven pars and Johnson's birdie at the 8th hole). And with that, Cal is still alive and well, chasing a championship.

* Florida State and Kent State tied for eighth. The teams will play in a playoff beginning at 8:00 a.m. PDT to decide the eighth and final spot in the match play competition.