This is the UCLA 2007 Matchup. Did Longshore throw that int or did DeSean run the wrong route? I guess we'll never know the truth of that controversial situation. But at least today, we can move one of these two forward in the CGB Hall Of Fame.

This is in the Joe Kapp Regional. The winner here takes on Mike Silver. That could definitely be an interesting matchup! Full write ups after the jump. Full bracket here. Voting ends this Friday, so go and VOTE! 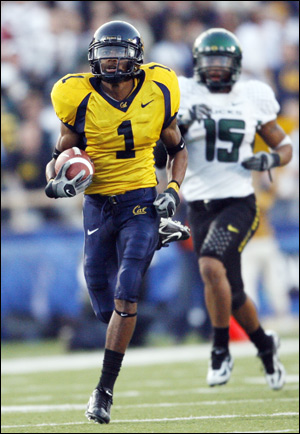 Perhaps no other skill player in Cal history instilled as much fear and respect into opposing defenses and special teams coverages as DeSean Jackson. Opening day starter as a true freshman. His first two career touches went for touchdowns against Sacramento State. Led the Bears in receiving as a sophmore with 59 catches for 1,060 yards and nine touchdowns as set a Cal record with four punt returns for touchdowns. Perhaps his greatest play was a 77 yard punt return against Tennessee in 2007 that went for a touchdown. Some consider him an enigma during his Junior year, in which the Cal football team collapsed in the second half of the season, however, his overall body of work is not to be ignored. He departed holding Pac-10 records for punts returned for a touchdown both in a season (four), and in a career (six). Jackson ranks third all-time at California for receiving yards with 2,423 and receiving touchdowns with 22. He is sixth in receptions (162). Jackson finished with 52 career plays of 20 yards or more, making up 23 percent of his 226 touches.

Just the mere utterance of his name can make even the most loyal Cal fan feel a mix of emotions. Some love him. Some hate him. Some love him and hate him. Some hate him and love him. We Cal fans as conflicted about him. Heck we even have a Hall of Fame fanpost CGB by the legendary danzig entitled "Nate Longshore: Setting the Record Straight." For what other player have we devoted such emotional angst? Okay, besides Kevin Riley. Anyone? Anyone? 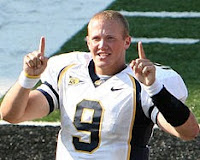 But we digress. Putting the emotions aside, Nate Longshore has some legitimate CGB Hall of Fame credentials. Ohio Bear summed them up on the nominations thread

"He was the quarterback of Cal's 2006 Pac-10 co-champions, Cal's first share of a conference championship since 1975. He had particularly great performances that season against Oregon (on national TV) and at Oregon State. Until his injury in 2007 took us to the great "Nate or Kevin" debate to end all debates, Nate was the clear starter and a guy we had confidence in.

The fact of the matter is, Nate gave Cal football fans a lot of wonderful moments. He enjoyed a very good 2006 season, particularly his games against Oregon, Oregon State, Ucla, and the Holiday Bowl against Texas A&M. Pre-injury in 2007, Longshore looked the part of an elite Pac-10 quarterback in Cal's win against Tennessee and was as gritty as anyone in helping Cal beat Oregon at Autzen Stadium, one of the greatest Cal wins of the decade. Were it not for the ankle injury at the end of the Oregon game in 2007, which changed the course of Longshore's career, who knows where he would have ended up in the hearts and minds of Cal fans? We'll never know. But what we do know is that there have been few players for whom we've devoted as much mental energy in debating his merit and his place in the Cal program. There have been even fewer Cal players who quarterbacked Cal to a share of a Pac-10 championship.