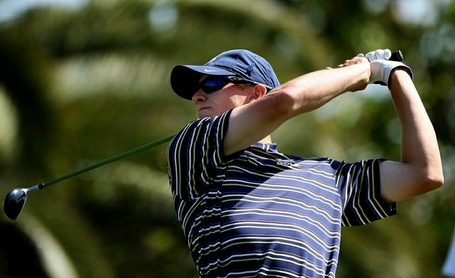 Brandon Hagy shot a 2-over par 73 on Wednesday for the Bears. Hagy is tied for 16th after 36 holes of the 54-hole individual competition.

The third round of the 2012 NCAA Men's Golf Championship takes place today at the Riviera Country Club in Pacific Palisades, Calif. And it's gut check time for the Pac-12 champion California Golden Bears: through the first two rounds of stroke play competition, the Bears find themselves in a five-way for eighth place with a team score of 584 (+16). Cal posted a score of 289 (+5) in Wednesday's second round, a six-stroke improvement over the first round that helped move the Bears up seven spots on the leaderboard.

For Wednesday's second round, the Bears started off with early tee times, each of them participating in threesomes with competitors from top-seeded Texas and first-round leader (and # 2 seed) Alabama. Cal started off well, paced by Max Homa's three-birdie, bogey-free front nine. With the top four scores counting toward the stroke play total, Cal's best four (Homa, Michael Kim, Brandon Hagy, and Joël Stalter) were 2-under par on the front nine --- a score that could have been even better but for Stalter's double bogey at the 9th.

As it did for most teams on Wednesday, however, the back nine at Riviera bit the Bears. Cal's top four golfers combined for 10 bogeys and only three birdies on the back nine to give back a little bit of what they gained on the front nine. Still, the Bears managed to put themselves in contention, finishing the day in a tie for eighth place along with Kent State, Florida, USC, and Illinois. Alabama (285-287 - 572, +4) leads the team competition by four strokes over UCLA (289-287 - 576, +8).

Cal's eighth-place standing is important: today marks the final day of the stroke play portion of the competition, with the top eight teams advancing to the match play quarterfinals tomorrow. Follow the Bears as they try to keep their national championship chase alive. This is your open thread for the day's action. Cal will tee off starting at 12:50 p.m. in five threesomes with golfers from Kent State and Liberty. A live video stream will be available at the NCAA.com website. Click on this link for live scoring updates throughout the day.

Also, an NCAA individual champion will be crowned after today's third round of stroke play. Thomas Pieters of Illinois (-5) leads that competition by two shots over UCLA's Anton Arboleda and Florida's Tyler McCumber. Cal's Hagy is in a tie for 16th, seven shots behind.

Scores and leaderboards after the jump.