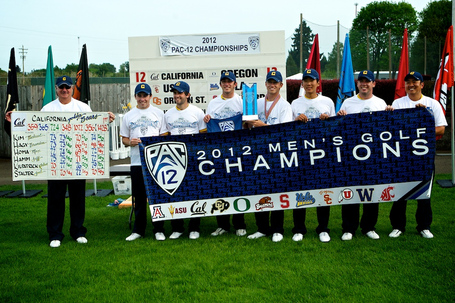 The 2012 Pac-12 champions continue their chase for a national championship today.

Tuesday marked the beginning of the 2012 NCAA Men's Golf Championship at historic Riviera Country Club in Pacific Palisades. The third-seeded California Golden Bears got off to a bit of a rough start, posting a team score of 295 (+ 11) and finishing the first round in a tie for 15th place, 10 shots behind first-round leader Alabama.

As expected, Cal used a lineup of sophomore Brandon Hagy, freshman Michael Kim, junior Max Homa, sophomore Joël Stalter, and junior Pace Johnson. For the first three rounds of stroke play format, the top four scores count toward the team total. Hagy was Cal's top individual performer on Tuesday, carding an even par 71. Johnson (72, +1), Kim (76, +5), and Homa (76, +5) posted the other scores that counted toward the Bears' team total. Hagy, Kim, and Homa carded the same number of birdies (three) on their respective rounds, but Kim and Homa were each victimized by the bogey bug. Kim made double bogeys on both the 2nd and 17th holes, while Homa suffered through a stretch of four consecutive bogeys on the front nine (the Bears' second nine, as Cal started the first round on the 10th tee).

Stalter's was the score that didn't count for the Bears' on Tuesday. Stalter shot 78 (+7), a round that was marred by double bogeys on the 5th and 12th holes.

The Bears will tee off bright and early for the second round with tee times at 7:00 am PDT (Johnson), 7:10 (Stalter),7:20 (Homa), 7:30 (Kim), and 7:40 (Hagy). There will be no live video stream for today's second round, but you can follow the action with this link to the live scoring updates. Live video stream coverage provided by ncaa.com will begin tomorrow for the third round of competition.

After the jump, see the first round team scores and leaderboard.