And it comes down to this, three final races to determine the whether the top ranked Cal Bears will bring home the 3rd NCAA Championship in program history (and the 3rd NCAA Team Championship of the season for Cal). Bears have avoided any letdowns on Friday and Saturday to advance all 3 boats (V4, JV8, and V8) to the respective Grand Finals today. Both V4 and JV8 won their heat on Saturday (nice recap of Saturday's action here), while the V8 grabbed the very important last Grand Final berth in their heat by finishing 3rd.

"ROW" ON YOU BEARS! (courtesy of fiatlux) 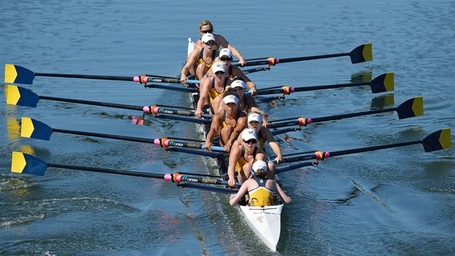 Schedule of Events (in pacific time)

Only Cal, Virginia, and Princeton have boats in all three grand finals! Review of scoring and break down of possible scenarios (why it's not necessarily just a three school race) after the jump.

From my posts earlier this weekend:

One minor exception: points are only award to "Varsity boats from Universities" but often there are "at-large" boats that make it to the finals. "Points earned by an "at large" boat will be awarded to the next boat competing in the team competition."

Got all that? Things can of course be simple if the Bears just sweep across the board.

So even though only Cal, Virginia, and Princeton are in all 3 grand finals, other schools have boats in the petite final to also pick up points. With how V4 is not weighed as much as the other two races, school such as Michigan (2nd best semifinal V8 time and best JV8 time, even better than Cal but competed in a different heat) are also dangerous. Brown won the NCAA title last year despite not having a boat in the V4 grand final and not winning neither the JV8 nor the V8.

The undefeated for the year Cal V4 boat is a heavy favorite to win the V4 Grand Final. JV8 is also expected to possibly win the JV8 Grand Final. Depending on how the other schools finish, the Cal V8 team might have some cushion in the V8 Grand Final to clinch the team championship. Virginia has had the best V8 times both Friday and Saturday and are probably the favorite to win the V8 final. It would be a lot more comforting if the Bears put a distance between themselves and Virginia in the V4 and JV8 finals.

Lead by Pac-12 Coach of the Year, Dave O'Neill, and Pac-12 Athlete of the Year, Elise Etem, here are your 2012 Cal Bears squad and their pump up music of choice (taken from Women's Crew Bear Blog post by Heather Hargreaves):