After a successful first day at the NCAA Championship, the top ranked (and Pac-12 winning) Cal Women's Crew will have all 3 boats looking for a berth in the grand final on Sunday. Out of the two heats for each race on Saturday, the Bears happen to be placed in the first heat for all 3 events. Go Bears! 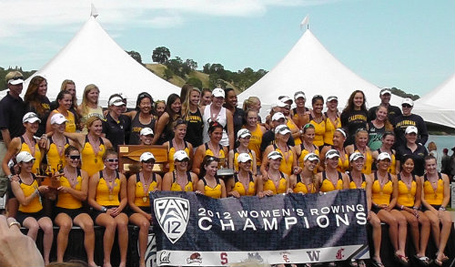 On Friday, the I Eights team finished 2nd in their heat (behind Ohio State) to "lose" a race for the first time since mid-April. The Bears will look to get back to its winning way (and at least a top 3 finish to advance to the grand final). Both the II Eights and the Fours won their heat. The Cal Fours are, in fact, undefeated in 2012. Roll on you Bears!

Cal's team is quick across the board, and owns the top seed in both the 2V8 and V4 after winning all three NCAA events at PAC-12s even against some stiff lower boat competition. The question with the Bears might be whether they can win a title on the strength of the two lower boats taking wins before the V8's take the course.

Schedule of events: (all time in Pacific time)

The squad for each Cal boat and their pump up music of choice.

One minor exception: points are only award to "Varsity boats from Universities" but often there are "at-large" boats that make it to the finals. "Points earned by an "at large" boat will be awarded to the next boat competing in the team competition."

Got all that? Things can of course be simple if the Bears just sweep across the board.