Today's match-up in the CGB Hall of Fame features two figures that are a little more obscure than some of the other people that we've featured. But no matter, they are Golden Bears through and through so we love them just the same!

Joe Kapp is a former Cal player and coach who had some great moments for the Beras including being the head coach on the sideline for The Play. He is also the father of former Cal fullback Will Kapp. I think it's pretty safe to say Joe is a lifelong Golden Bear that we should all know and love.

On the other side is Alex Filippenko, the distinguished astronomy professor. And while he may not have had accolades on the field of play anywhere, Berkeley is an institution of higher learning and Filippenko is one of the many professors that makes Cal one of the best around. So we'll honor him here.

This match-up comes out of the, incidentally enough, Joe Kapp Region. It will be interesting to see if Joe can carry his own namesake region or if, as in years past, a favorite non-sports person will spring the upset. I suspect that this will be a really close one. Whoever does prevail will move on to face Pete Cutino in the second round. You can check out the full bracket here and read the full write-ups after the jump. Remember, voting ends on Friday. GO BEARS! 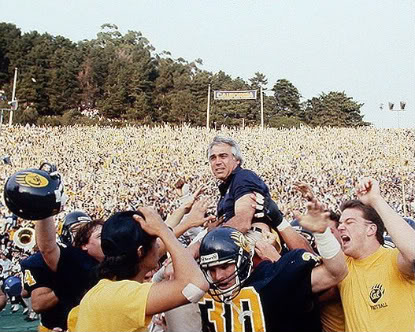 Former the head coach of the California football team...Kapp quarterbacked the Bears to their Rose Bowl appearance in 1959...earned first team All-American honors following the '58 season named by Time magazine and the Football Writers Association...was the starting quarterback for three years, leading a miraculous turnaround from a 1-9 team in '57 to the 1958 PCC title and a Rose Bowl appearance in 1959...Kapp is the only man ever to appear in the Super Bowl, Grey Cup, and Rose Bowl...also lettered in basketball in 1956 and 1957 in which the Bears made two NCAA Tournament appearances...had a fine pro football career, spending eight years in the Canadian Football League and leading the BC Lions to a pair of Grey Cup appearances before moving on to the NFL, where he led the Minnesota Vikings to the Super Bowl in 1970...voted into the CFL Hall of Fame in 1984...served as President and General Manager of the British Columbia Lions in the CFL in 1990.

"He may not be able to drink tequila anymore, so let's give him the CGB HOF instead!" 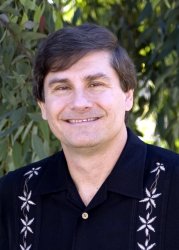 Alex Filippenko is the Richard & Rhoda Goldman Distinguished Professor in the Physical Sciences. His accomplishments, documented in about 700 research papers, have been recognized by several major prizes, and he is one of the world's most highly cited astronomers. In 2009 he was elected to the National Academy of Sciences, and he shared part of the Gruber Cosmology Prize in 2007. He has won the top teaching awards at UC Berkeley and has been voted the "Best Professor" on campus a record 9 times. In 2006 he was selected as the Carnegie/CASE National Professor of the Year among doctoral institutions, and in 2010 he won the ASP's Emmons Award for undergraduate teaching. He has produced five astronomy video courses with "The Great Courses," coauthored an award-winning textbook, and appears in numerous TV documentaries including about 40 episodes of "The Universe" series. An avid tennis player, hiker, and skier, he enjoys world travel and is addicted to observing total solar eclipses (11 so far).

Alex Filippenko holds a special place in my Cal experience. Professor Filippenko was the first faculty member I interacted with on a meaningful level at Cal. Though I was merely a high school senior who possibly could go to another institution, Professor Filippenko still took the time to get to know me and offer a bit of advice into my difficult decision. 3 years later, he still remembered my name, despite our having no contact during that time period.

In 2006, Filippenko was named the CASE Professor of the Year award, beating out other professors from universities across the country for the honor. A frequent guest on astronomy documentaries, Filippenko can
often be seen on the History Channel's "The Universe". He and his research group have performed some of the most groundbreaking research in astronomy; one project Filippenko collaborated and did extensive work on on went on to garner the 2011 Nobel Prize in Physics for Saul Perlmutter, another Cal professor. Filippenko himself is on some 660 published papers. In 2000, he was awarded the Guggenheim Fellowship,
and in 2009 he was elected to the National Academy of Sciences - just one of a laundry list of awards and accolades he has collected in his career.

In spite of his research accomplishments, Filippenko still takes the time to run Astro C10: Introduction to General Astronomy, a course Filippenko passionately teaches every fall. A professor with a stated philosphy "to bring the magnificence of the cosmos to the students and to show them that through careful observations, experiments and interpretations, we humans have the potential to understand how our universe works," Filippenko has consistently been voted the Best Professor at Cal, and Astro C10 is one of the most popular courses on campus. Filippenko is also active in student life, often serving as a guest speaker for student receptions and faculty dinners. In his time at Cal, Filippenko has touched and improved the lives of more students than almost any other professor in the world.

He even helped us get a Cal star

Following in the footsteps of the colors blue and gold, the Golden Bear and Oski, the campus mascot, comes UC Berkeley's own star system. Located in the Cygnus constellation, the double star Albireo - consisting of one blue and one gold star that circle endlessly- has been adopted by UC Berkeley's Student Senate.

Filippenko was by far my favorite professor while at Berkeley (my major was EECS). He has the ability to describe complex concepts in simple, accessible terms with an infectious enthusiasm. Just watch his talk at TEDxSF from a couple years ago to get an idea of what I'm talking about. He's been voted the "Best Professor" on campus many times, and was a member of both teams that discovered (in 1998) that the Universe's expansion is accelerating.