The Cal staff has reached out of state once again, securing a verbal commitment from Mansfield (TX) linebacker Chad Whitener on Tuesday night. Whitener is the fifth commit in Cal's 2013 recruiting class, and the third on the defensive side of the ball.

So what are we getting? How about a 6'1', 235 pound tackling machine that plays in the most competitive tier of high school football in the state of Texas? In his junior year, Chad compiled a ridiculous 194 tackles, 4 sacks, 2 interceptions, 2 fumble recoveries, and one forced fumble. That was good enough to garner him District 5-5A co-defensive MVP honors in a stacked district. Oh. and he also carries a 3.75 GPA. Merry Texmas, y'all! 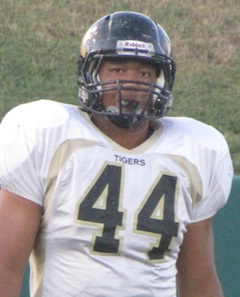 Chad was offered by Cal linebackers coach and Texas native Kenwick Thompson last Thursday after Coach Thompson visited Mansfield and briefly saw Chad in action. After just five days, Chad elected to commit to Cal prior to actually visiting the campus. That doesn't mean he made a hasty decision necessarily. Chad and his family did some lengthy research on Cal and felt that it was the right place to be. Works for me! The Whitener family had already scheduled a visit to campus for the weekend of June 1, so hopefully that will just cement the decision.

After the jump, we'll take a look at Chad's measurables and ratings from the various recruiting services, his highlights, and provide some analysis....with three times the evals thanks to a couple guest contributors!

ESPN has yet to rate and evaluate Chad.

OPTION THE FIRST! No music, kinda generic but conveys the point...

OPTION THE SECOND! Something a little longer, musical score included, and just more badass. Quality production and a delightful romp!

ANALYSIS...with some special guests who are smart and know stuff!

One thing that stands out right off the bat is that Whitener is built like a truck. At 235 or 240 pounds, he has college inside linebacker size already. And it isn't bad weight; he's very strong and pretty explosive. He uses that strength well when he comes into contact with the ballcarrier, often times negating their momentum and pushing or hauling them backwards. He's a very sure tackler, in case there was something about "194 tackles in a season" that you found confusing. He can lay a hit, and keeps his hands active. Once Chad gets his hands on a guy, they don't get much further. He's very strong against the run, capable of stuffing holes inside and also showing the sideline to sideline speed to chase down plays to the outside. He shows a great motor when in pursuit and has a nice burst when firing towards the line. When he reads a play, he's decisive and gets to the ball in a hurry. His speed is not elite, but we're talking about a 230+ pound linebacker, not a 170 pound running back. He has very good speed for his size and especially for a guy playing inside. Just note the number of outside runs he chases down.

We see a few pass breakups, but I can't speak much to how Chad performs in coverage. He has stated that it's an area he'd like to improve on, so I'll take him at his word. While not a primary duty inside, it's still critical. And I hope no one else just had a flashback of Chris Polk's 70 yard touchdown over DJ Holt. Oops, now you did! Another segment Chad has stated his desire to improve in is shedding blocks. He's very good at getting to the ball quickly, but we don't see many instances where he had to really fight to get there. Can he engage and shake off an interior lineman to get there? He has the strength to. With teaching and technique I don't think that will be much of a concern.

Here's what I do see: aggression, decisiveness, speed, strength, size and a motor to boot. Everybody loves a tackler. I also see a guy that should easily transition to our 3-4 defense as an inside linebacker in the Mike role. He's made for it.

On to the bonus takes!

Here's an evaluation from a guy who knows a thing or two about Texas prospects. Thanks to Wescott Eberts, editor of Burnt Orange Nation (follow him on twitter @SBN_Wescott for all things recruiting in the state of Texas), for weighing in on Chad's commitment and what we're getting.

The 2013 linebacker class in Texas is heavy on the outside linebacker types who look and run like safeties, so there's some necessary context when noting that Whitener is one of the best inside linebackers in the state. With that being said, it's a bit hard to understand why his recruitment was so slow to pick up, especially given that Mansfield is loaded with talent right now. I have to think that it would have picked up fairly substantially had he opted to continue the process and hold off on a commitment.
The best explanation for the relative paucity of offers is his size -- were Whitener 6-3, he would be a consensus four-star prospect and hold 20 or more offers as a national recruit. At nearly 240 pounds, Whitener moves extremely well for a linebacker of his size, which also means that he won't have to work to add mass in college, as he's already at an ideal playing weight.
A wrap-up tackler who strikes well, Whitener plays with the barely controlled recklessness that defines the best linebackers, though I would like to see more evidence on film of his ability to hit and separate from offensive linemen, as that will be crucial to determining his collegiate upside. For linebackers, having ideal height is more about the type of reach it creates so they don't get engulfed at the second level or on blitzes.
As long as Whitener can succeed there, he has all the other attributes to become a successful player at Cal.

You want some more? Let's hear from another guru of Texas recruiting who has some great thoughts and info on Chad. Thanks to Inside Texas Recruiting Editor Eric Nahlin (follow him on twitter @EricNahlin for more tasty Texas recruiting morsels) for sharing his thoughts on our newest commit.

Cal got a good one, especially for ILB in their 34 defense. I've been a fan of his ever since he made me feel foolish for discounting him as a prospect at the first sound of Chad. I actually saw him today as I stopped by Mansfield.
Chad's early favorite was Texas A&M but the Aggies have their eyes set elsewhere, perhaps blindly. A&M alerted Mansfield Coach Jeff Hulme that they'd like to see Chad run. Coach Hulme responded, "Geez you'd think they might watch the film they requested I send."
A&M is looking at some quality linebackers so I don't necessarily blame theme there, but Whitener is a viable in-state take for them, which makes him a fine OOS take for Cal.
And yes, he can run. In fact it's the first thing that stood out about him. He may not be the tallest or most dexterous linebacker, but he's intelligent and decisive with innate downhill aggression as well as good horizontal tracking. His lone question would be in coverage because he hasn't been asked to do a whole lot of that, but he's gamer with solid upside. He's an absolute tackling machine that will probably play better in games against schools like USC than Oregon.
I've talked to Chad numerous times and he hates that I have him ranked as the fifth best linebacker in Texas. I like that about him.

Here's some quotes and comments from a few other pieces written on Chad's commitment to Cal.

From Jim McGill's free article over at Bear Insider:

"Coach Thompson offered me on the 17th," said Whitener. "He visited here and then offered me later on the phone.

"He likes my physical style of play and thinks I'll fit in well at Cal.

"Me and my family have done a lot of research," said Whitener. "Cal plays a 3-4 style of defense I like and their academics are outstanding. Their facilities are top notch and they've renovated their stadium so things are looking great at Cal."

Staff stability is another attraction to the big Texan, with Cal head coach Jeff Tedford's 12-year tenure the longest in the Pac 12, not to mention Thompson's stay in Berkeley since 2006.

"Coach Thompson's my position coach and he's been there six years," said Whitener. "Overall, it just seems like the perfect place to be."

From Ryan Gorcey's free article over at Bear Territory:

"I am a Bear," he said excitedly. "I felt like it was the opportunity of a lifetime, and I really wanted to take it. It's really just the whole academic situation there, and I looked at how the depth chart would work out by the time I get there, and they recruited me at the position I want to play. We did our own homework on the school, too, don't get me wrong, but it's the perfect place for me."

Clearly, Chad feels good about his commitment, and is very excited about his future as a Golden Bear. Just wait till he and his family get to campus next weekend. I feel good about it too. I'd echo both Eric and Wescott's opinions that it's a bit puzzling that a player of this caliber was sitting on just four offers. I see a guy who brings a lot to the table; size, speed, smarts, and most of all production. Numbers don't lie, the man has a nose for the ball. I have a feeling that a few more major programs may come knocking in the fall. Let's cross that bridge when we come to it though, doomsayers. For now, let's enjoy our newest addition. I sure as hell hope we keep him. Could be another great Golden Bear from the Lone Star State.

What are your thoughts on Chad? Let's hear in the comments.