TwistNHook: Heading into Sunday's games, Cal softball was a strange position. Not only were they the visiting team at their own ballpark, but they were on the ropes. Their opponent, Arkansas, had the advantage. As the NCAA Regionals are double elimination, Cal had to beat Arkansas twice in a handful of hours to move on to the Super Regional. Since Arkansas had beaten Cal on Saturday, it was Cal with the sole loss, not Arkansas.

So, first, Cal took on Arkansas at 5 PM. If Arkansas won, Arkansas moved on to take on UDub. If Cal won, then Arkansas took on Cal another time in a winner moves on match. But first things first:

The 5 PM game. It was a gorgeous day in Berkland on May 20, 2012. Is there anything better than a warm spring day with the green of the grass and what would eventually be two dominant Cal wins???? 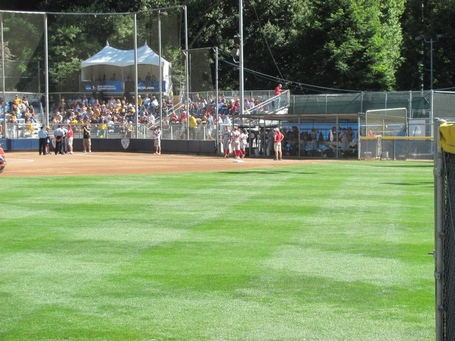 More photos and discussion of the games after the jump. GO BEARS!

Like I said before, Cal was the visiting team for the first game, because Arkansas had the advantage from their win the day before. So, please note that Guest here is Cal and home is Arkansas. 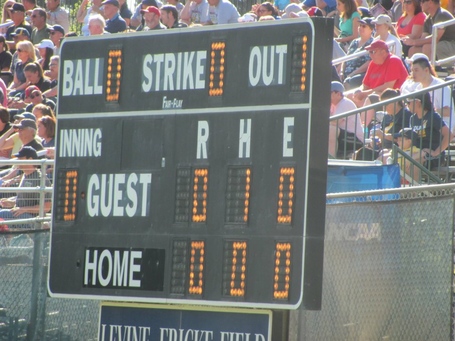 Cal was even in the visiting dugout. Was this the first time ever that that happened at Levine-Fricke Field??? 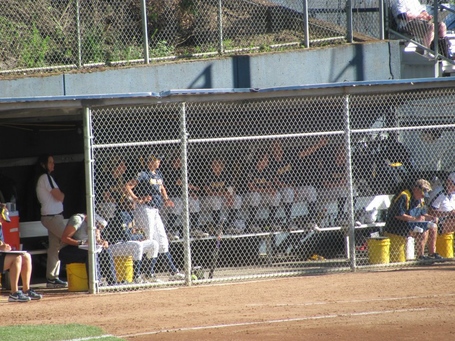 With their back against the wall, Cal was aggressive. They jumped all over the Ark pitcher. Cal scored 3 runs in the 2nd inning, but could have easily scored more. They had tons of runners on base all game long. 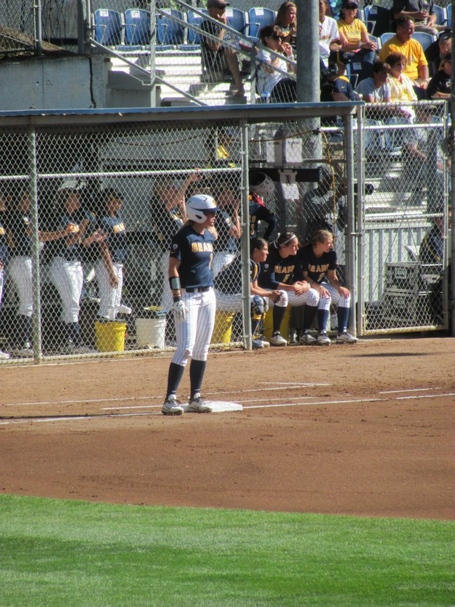 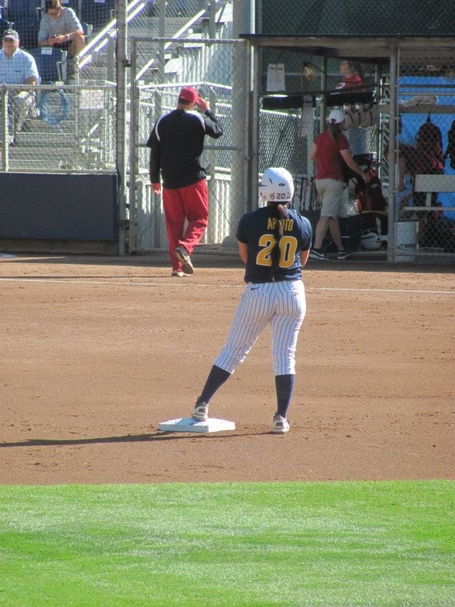 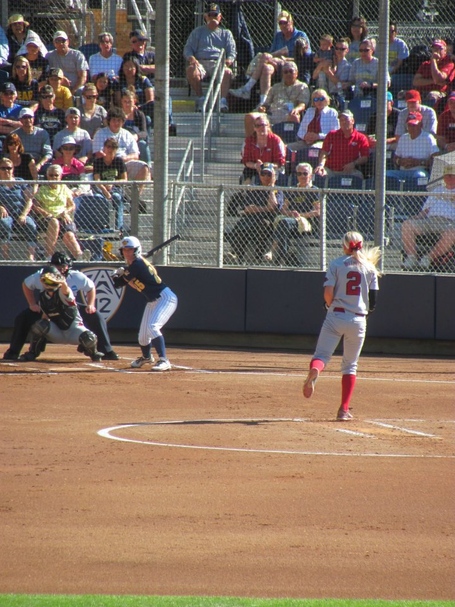 Here is the press box, which I believe they put in for the Regional. 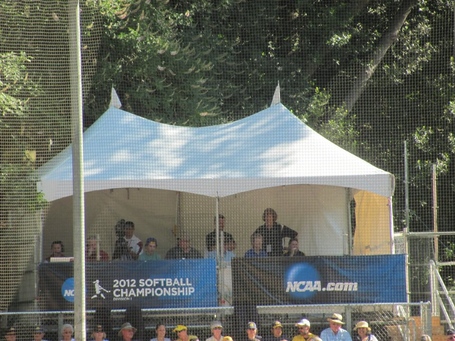 Here, they are walking Valerie Arioto. Ark intentionally walked Arioto almost every time she came up to bat. They gave her the Barry Bonds treatment. But Cal countered by putting its hottest hitter Frani Echavarria behind her. Frani, who is a fan favorite, was carrying a hot stick all weekend long and she didn't disappoint in THIS game. 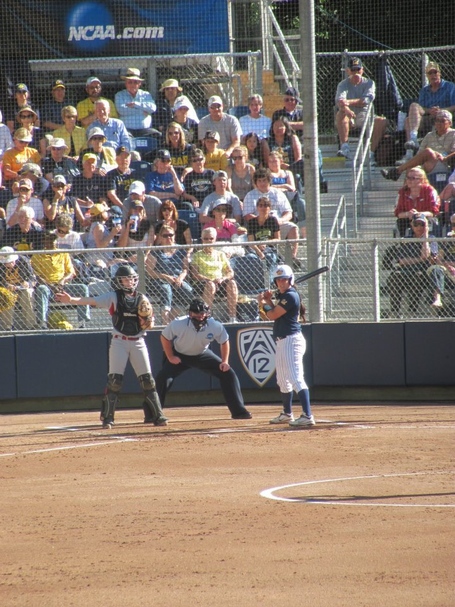 I tried to get a shot of Frani hitting a sweet double, but missed it by one second. Got this instead: 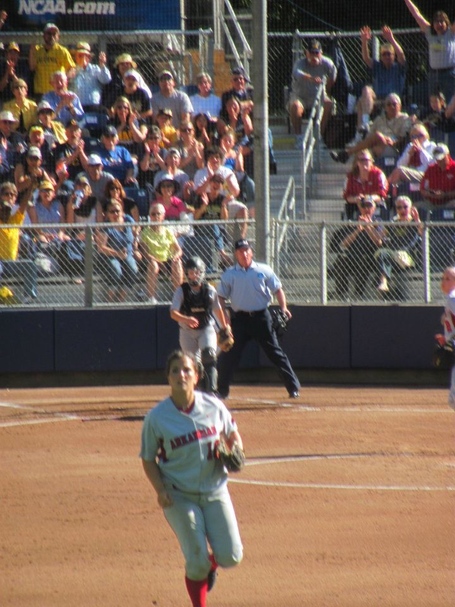 The fans LOVE Frani. Mike Silver, who was seated two rows behind us, was going wacktacular over her. I fucking love Silver, bee tee dubs. He's a big city sportswriter, but was there with his cool family and he was going crazy. Bringing the fan heat. Heckling, yelling, screaming, chanting, just getting into it. I don't know if that is how he always is. Maybe at his kids' little league games, he's that out of control parent going "YOU CALL YOURSELF A T-BALL UMPIRE?!?!" But I doubt it. I think he is just a really spirited Cal fan and helps rep the B+G on a national level. 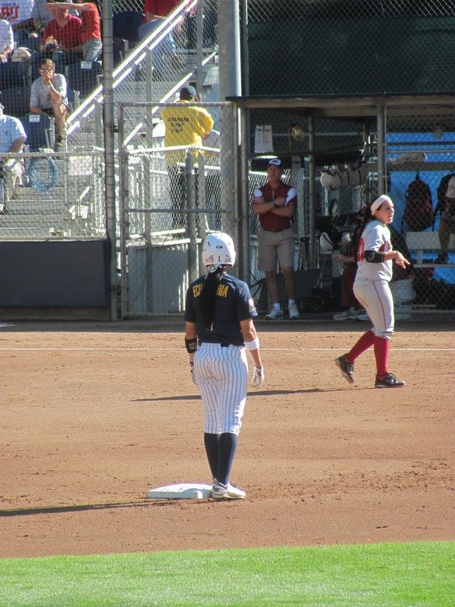 We were in the outfield bleachers, close enough to heckle the opposing players. 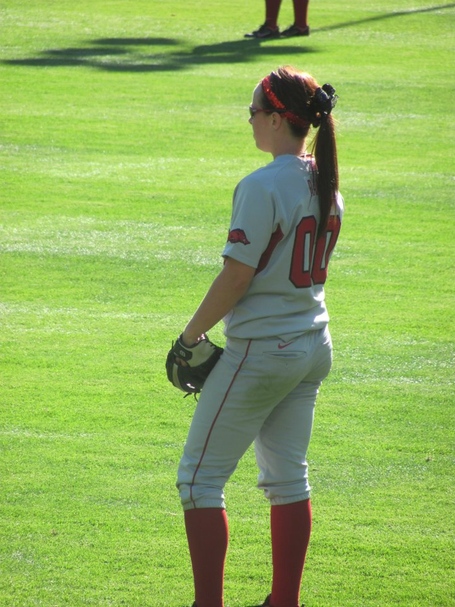 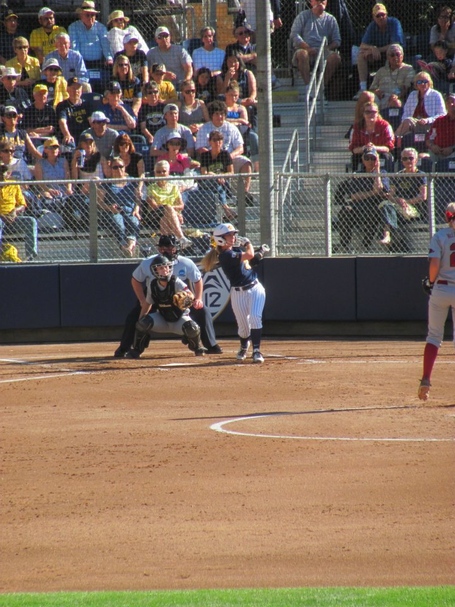 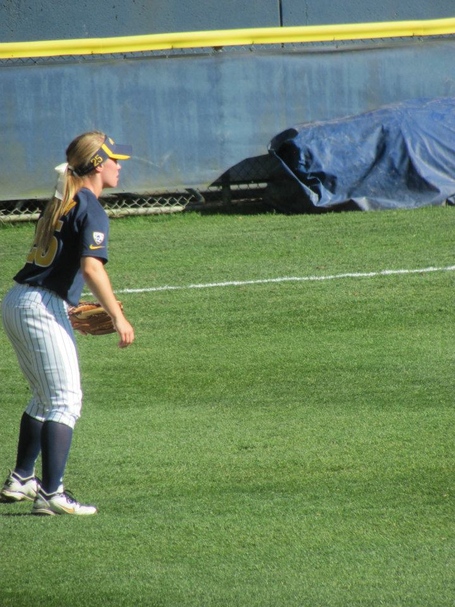 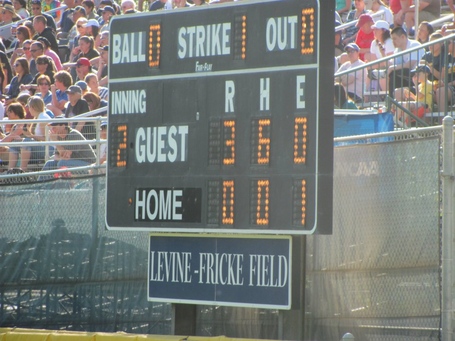 In softball, you can't really (NorcalNick note: at all) take a lead. You have to stay on the base until the pitch, so players get into these exaggerated stances, like they are about to start a sprint. Then, when the pitcher starts, they are off! 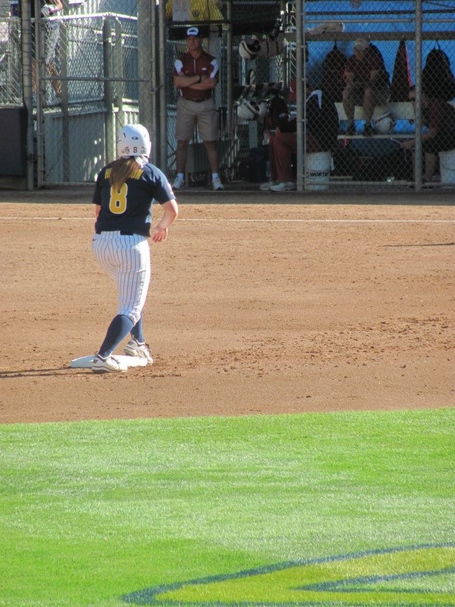 Sadly, an Arkansas player hit a 2 run homer, making it 3-2. However, that was the last Arkansas would score in the first game. Also, all day! 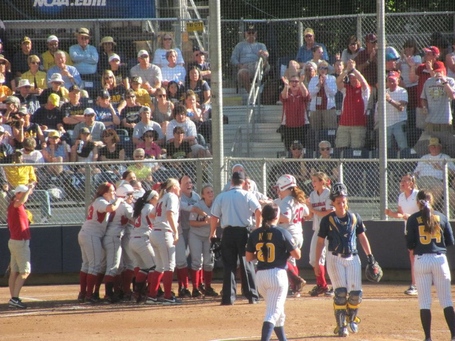 And in a photo that seems to flip the script, Cal responded with 2 homers of their own. First, Danielle Henderson hit a homer to make it 6-2. That was in the fourth. 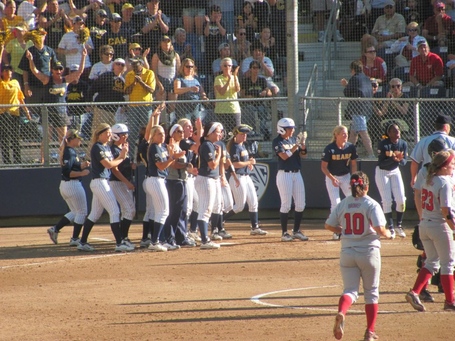 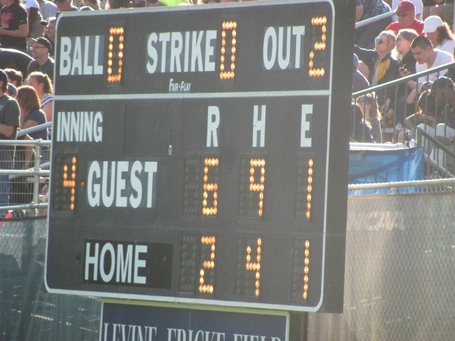 Between innings, the softball players come out onto the field and warm up a bit. 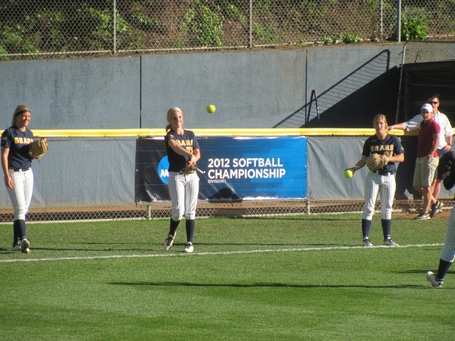 Then, in the top of the 5th, we had a FRANI GRANNY! Frani hit a grand slam to make it 10-2. FRANI GRANNY! Anybody with an advanced degree in math can tell you that that is an 8 run difference. In college softball, if you finish 5 full innings and one team is up by 8, it's mercy rule time. So, Cal just had to finish the 5th frame without giving up a run to Arkansas and they would win game one, forcing a second game. 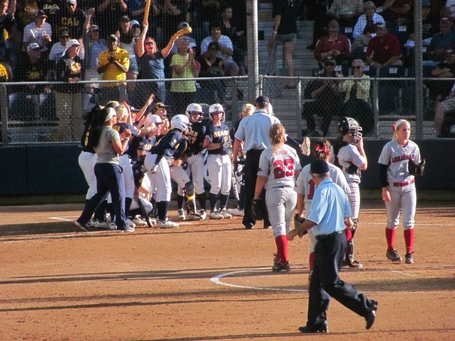 Jolene Henderson pitched that scoreless 5th frame to finish the game. Henderson had a MONSTER weekend, as Avi outlined here. A truly amazing pitcher. This is why Cal is #1 in the nation, people! 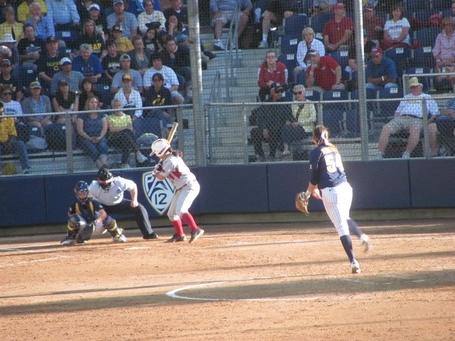 GAME OVER, MAN! GAME OVER! 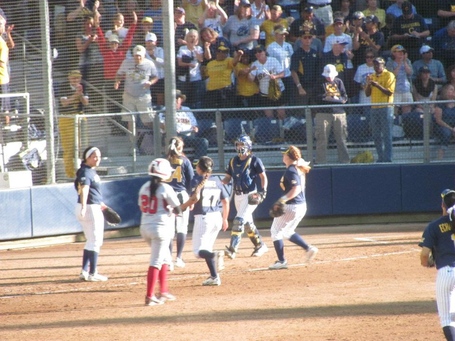 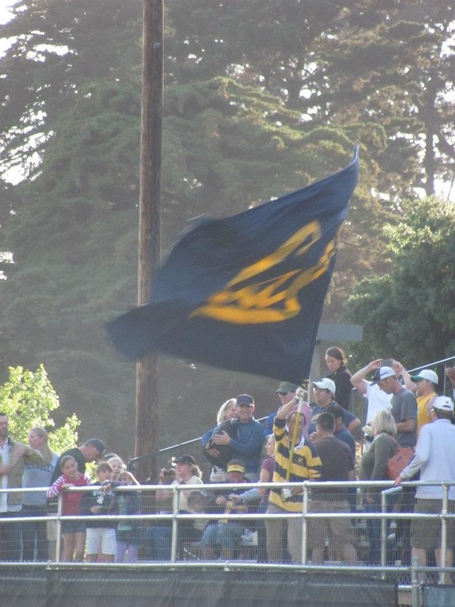 And with that, we forced a second game on the day. Winner take all. PS Cal won. GO BEARS!

NorCalNick: Honestly, the 2nd game was pretty lacking in drama. Cal busted out with 3 runs in the 1st inning and 3 more in the 2nd. And like the night before, my camera was unable to get many usable pictures as darkness fell . . . which happened sooner than usual thanks to astronomy! 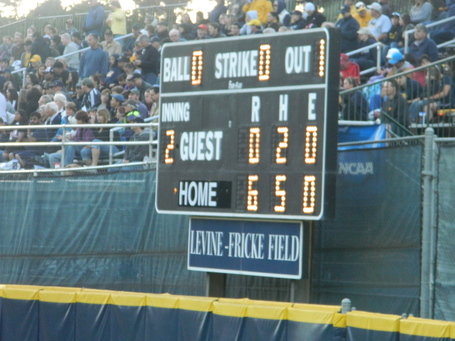 At this point we were just playing the waiting game. Arkansas wasn't going to be scoring 6 runs on Jolene. Cal added an insurance run and came perilously close to the mercy rule win. But no matter - Jolene can pitch 7 innings as well as 5 or 6. And the result? Cal wins! 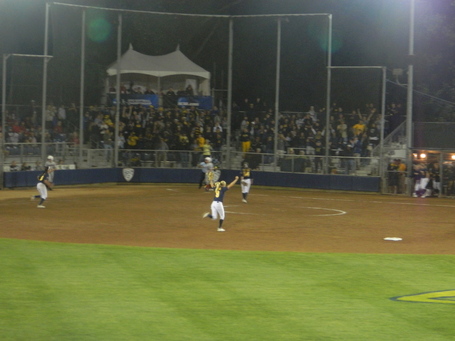 The celebration was actually pretty muted, which isn't surprising. For one thing, Cal had maintained a dominating lead for a solid hour. For another, the Bears certainly expected to win their own regional. But it was still sweet!