Back when I was just a wee college student, I spent my summers working at the Strawberry Canyon athletic complex. Many warm summer days were spent herding cute children from the pool to the softball field and back again. So I'm pretty familiar with Levine-Fricke field and the surrounding environs.

But when I arrived on Saturday, nothing looked familiar. Of course, the construction around Memorial Stadium wasn't surprising, but it was still different. But even that wasn't as jarring as the amount of activity going on around the usually quiet mouth of Strawberry Canyon. Generators hummed as they provided power for lights, concessions and NCAA officials. Booths were everywhere. Cal even set up valet parking, jamming as many cars as possible into a parking lot made even tinier by the huge temporary left field bleachers. It was a facility transformed, and I was impressed with the planning the athletic department put into the event.

But the most impressive addition? The bathrooms: 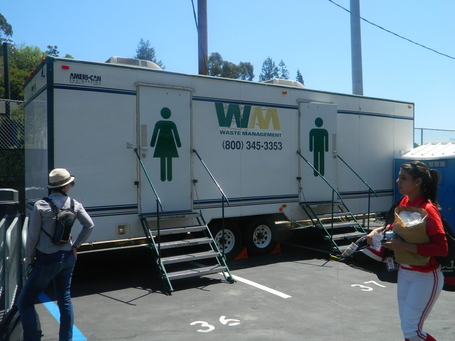 No, honest. These things were amazing. They may look modest on the outside, but the inside contained immaculate wood tiled floors, a fancy tiled sink and solid, thick wood doors. It's the fanciest temporary restroom I've ever used, and I hearby officially nominate them for the Loo of the Year award.

But we weren't here for bathrooms - we wanted softball! Prior to the game, CalBear81 and I had conversations about how we wanted to approach the day. Things like "So, after Cal beats Arkansas, do you think we should stick around for the Boston/Iona game?" 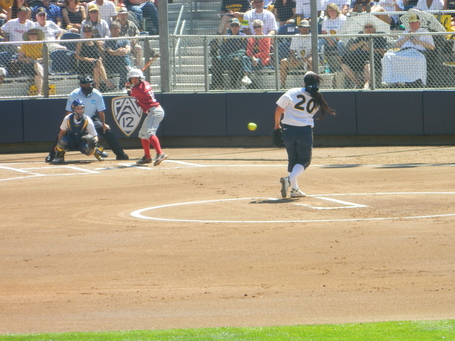 So sure enough, we had barely taken our seats before Arkansas jumped out to a 3-0 lead. Valerie Arioto started the game, but she didn't have her best stuff. Single, double, single, 2-0 Arkansas, Cal pitching change. Jolene Henderson came in and immediately gave up a home run to Arkansas's clean up hitter to make the score 3-0. Jolene got out of the 1st after that, but Cal would be playing from behind the rest of the game.

Even though Arkansas was up, I was still pretty confident. After all, Cal averaged about 7 runs a game and the Razorbacks don't have the greatest pitching stats. Surely the runs would come? Well, not exactly. The base runners came, but the runs didn't. Arkansas pitcher Kimmy Beasley had an unusually intricate pitching motion that included this move: 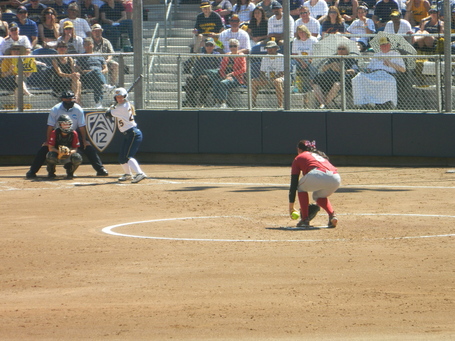 I don't recall a squat ever being a part of a pitching motion, but it certainly seemed to work for her. Heck, maybe it even threw off the timing of the Cal hitters. Beasley was walking a very thin line most of the game. She generally refused to challenge Cal's hitters, electing to tease the Bears with close pitches that weren't quite strikes. The result was more than a few walks but only occasional hard contact. I kept expecting the big hit but it never really came. But it wasn't for lack of effort: 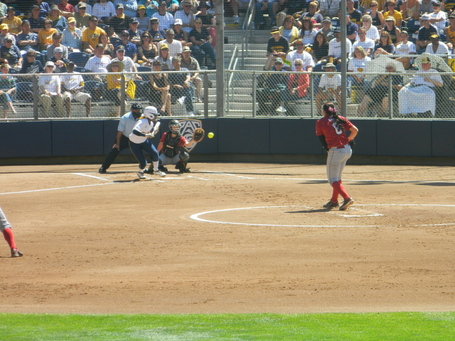 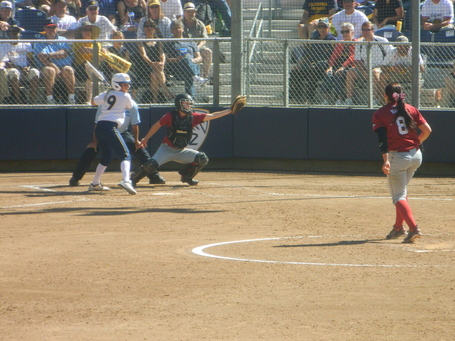 As you can see, Beasley wasn't always close to the plate, and she got a bit wilder as the game wore on. In response Arkansas brought in Chelsea Cohen, probably their best pitcher. She wasn't lights out, but she got the job done - in large part because her defense was excellent behind her. 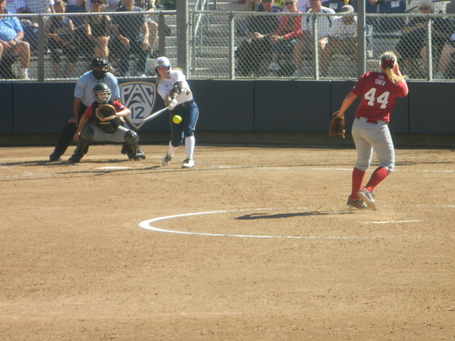 Meanwhile, Jolene was lights out the rest of the way. This is perhaps my favorite picture of the day: 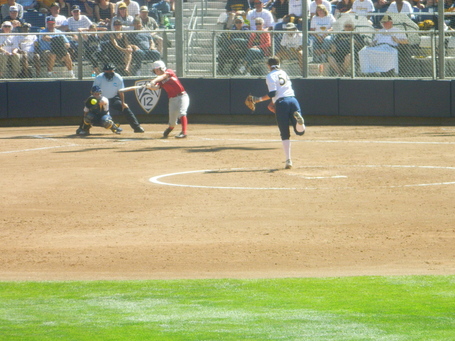 I don't think the Arkansas batter had much of a chance on that pitch. Ouch. 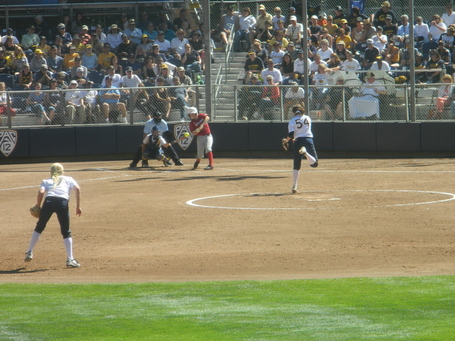 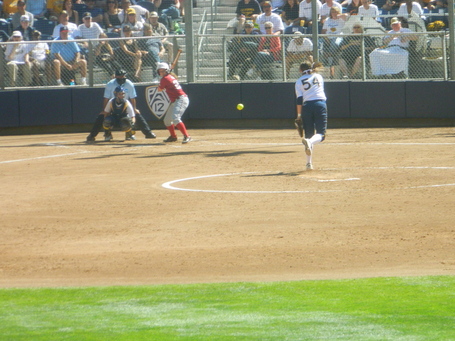 And as usual the defense behind Jolene was solid: 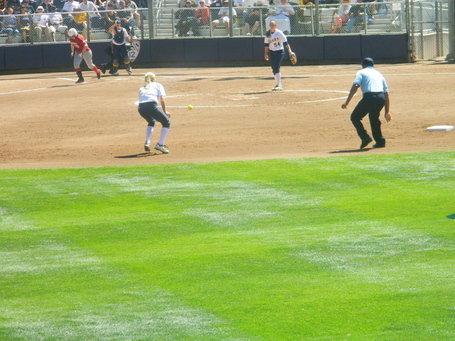 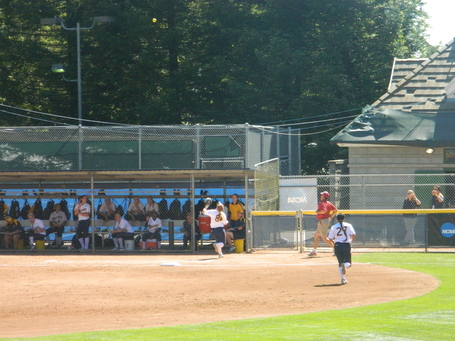 The only real highlight of the game was Jamia Reid's steal of home plate after Arkansas intentionally walked (again, sigh) Valerie Arioto. I actually noticed immediately when she broke away from 3rd, but didn't realize what it meant until she slid across home plate. Jamia runs faster than I can think, which may not be a big surprise but it's still funny!

Alas, that was one of just two Cal runs, and the Bears had been shockingly defeated. We were numb. Now we had to figure out what to do with ourselves for a few hours. Would we watch Iona and Boston fight for their tournament lives? Or would we go get food? Food, as it turned out. On our walk down the hill, we ran into this interesting license plate. It was a tough omen to decipher. 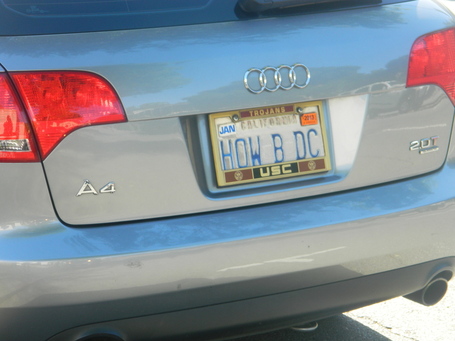 After 90 minutes or so of wandering, we decided to head back up to catch the end of the Iona/Boston game. We headed up to the left field bleachers to chat with flag-waiver extraordinaire AndyHogan14, and arrived just in time to see Iona score a run in the 6th to tie the game up. Little did we know that the game wouldn't even be halfway over at that point.

We were all a little bummed that our day ended up being longer than anticipated, and so a 13 inning thriller didn't seem nearly as exciting as it should have been to impatient Cal fans. I suppose that a long, tiring game was to our advantage, but we came to watch the Bears! Even the Cal players seemed impatient as they warmed up on the rugby field and watched the action from a section on the left field fence.

Poor Iona was just one out away from a win in the 10th or 11th inning (it all started to run together for me) but a crushing error gave Boston 2nd life, and they finally won in the 13th. Their reward? a 30 minute break before facing the #1 team in the country, starting at midnight Boston time. Ouch.

The Bostonians didn't stand much of a chance the way Jolene was pitching, and as Boston's head coach said afterwards:

A lot of things had to go right for us to get by them tonight. Arkansas stirred the beehive by beating them, so it was unfortunate to be the opponent to play them next.

Cal threatened to score in every inning, and managed to push runs across in 5 of 6 innings. Unfortunately, it was dark which meant my camera didn't get many good shots that didn't end up blurry. But trust me when I say it was beautiful under the lights: 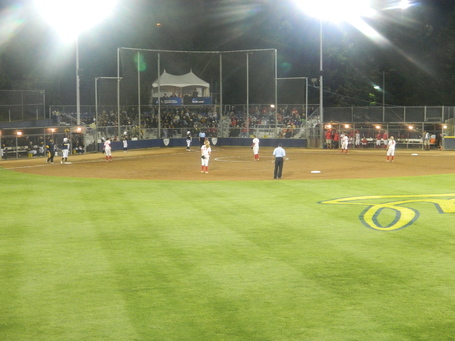 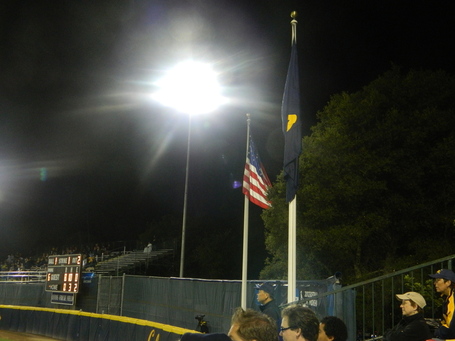 As I mentioned in yesterday's recap, Jolene's change-up was unhitable. It bore in on the inside on righties and dove below the bat whenever they swung. Here's a picture that gives you an idea of its movement: 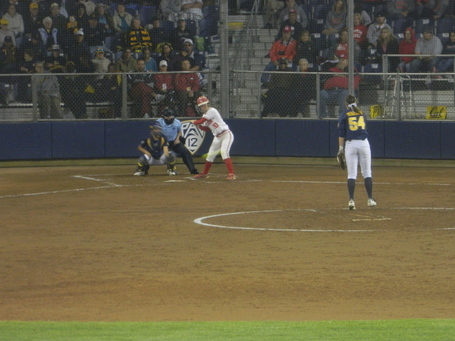 I want to say that she got at least 10 swing-through strikes using that pitch against the Terriers, if not more.

And so Cal preserved their season with a late, late night mercy rule victory. Coming up tomorrow: Photos of Cal's Sunday sweep!