On May 20, 2012, we went out to the Cal baseball game against UCLA. It has been a very rough season for Cal in 2012. 2011 was a magical season where the team went from the chopping block to the verge of a national championship. Fans had high hopes entering 2012 and, sadly, it was not to be. Cal is in the lower quadrant of an admittedly difficult Pac-11 (Colorado doesn't field a team). We probably aren't going to make the post-season this year.

While there is a lot of negativity surrounding the program again, you wouldn't see it at Evans Diamond on Sunday. It was a gloriously gorgeous day. Sure, Cal was scrambling to avoid the sweep at the hands of the dastardly Bruins, but it was Senior Day. And there was some sort of event for kids, ensuring tons of kids running around the ballpark.
Michael Theofanopoulos started for the Bears, but only went 3 innings. It was not as if he was getting blown out of the water. It was only 1-1 after 3. However, Esquer decided to put in pitcher Kyle Porter (briefly) and then move on to Logan Scott. More on the game after the jump. GO BEARS! 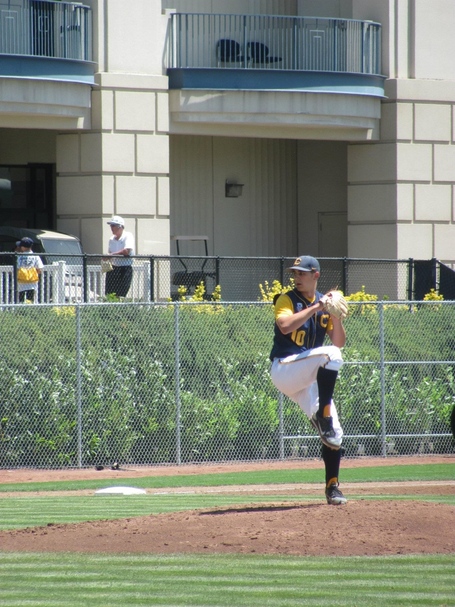 Cal had 4 pitchers in the games, so meetings at the mounds were not uncommon. I do not know exactly what they are ever saying in these meetings. Discussing the World Championships Of Rock, Paper, Scissors? Determining how to spend their tax refunds? Who knows? 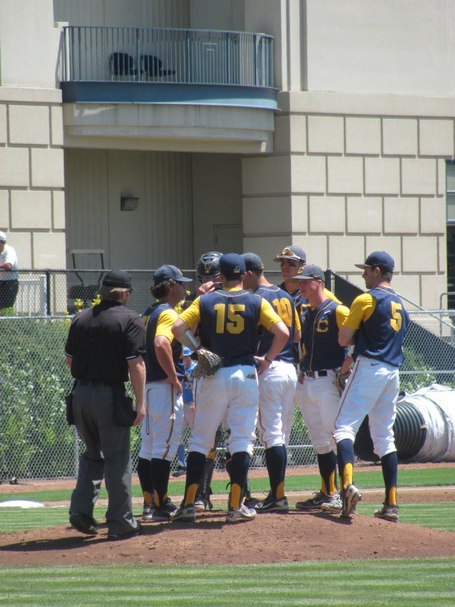 Here is Porter warming up. He only came in to the game briefly. Perhaps Esquer wanted him to pitch longer, but he didn't do so well, so Esquer took him out. Unknown to me. 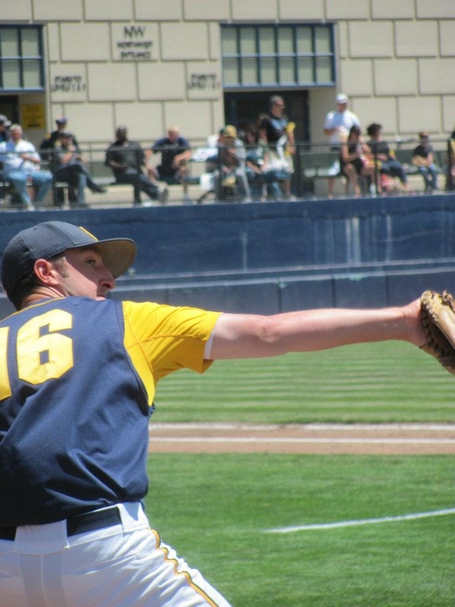 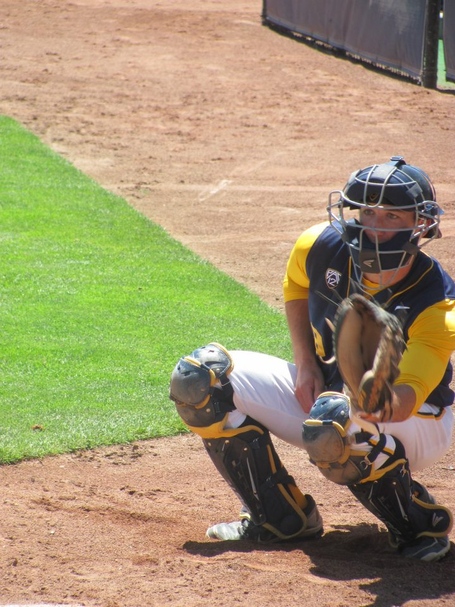 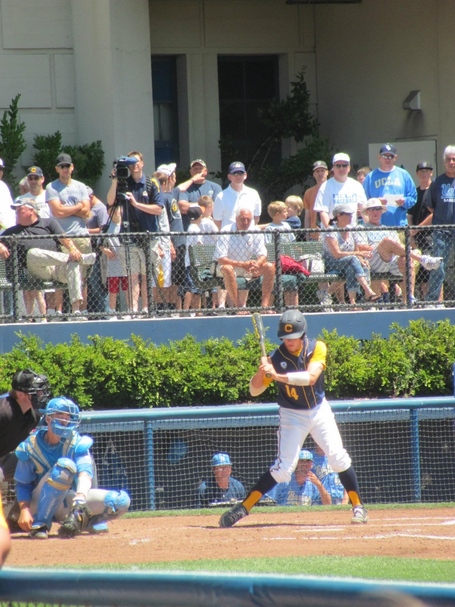 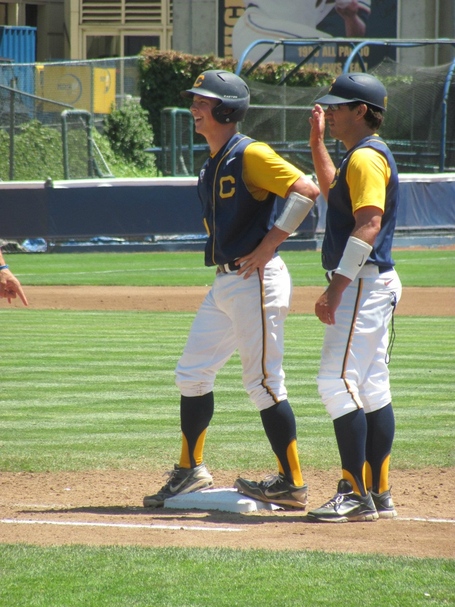 UCLA jumped out to a 2-1 lead and it didn't look great for Cal. Like I mentioned earlier, UCLA had won the first two games. I feared that Cal might never make this a game. They were only down 1, but I feared it would get worse. Then, in the 4th Chadd Krist hit a sweet homer to make it 2-2. Some signs of life! Tied it up!

And then in the next half inning, UCLA scored 2 to make it 4-2. So, bully. But wait! In the bottom half of the 5th, Cal looked like they might strike right back. They juiced the bases and had zero outs. How could we screw this up? By hitting a line drive directly to the 1B, who then tagged the Cal runner. 2 outs just like that. And the UCLA pitcher coaxed the 3rd out painlessly to kill any rally. 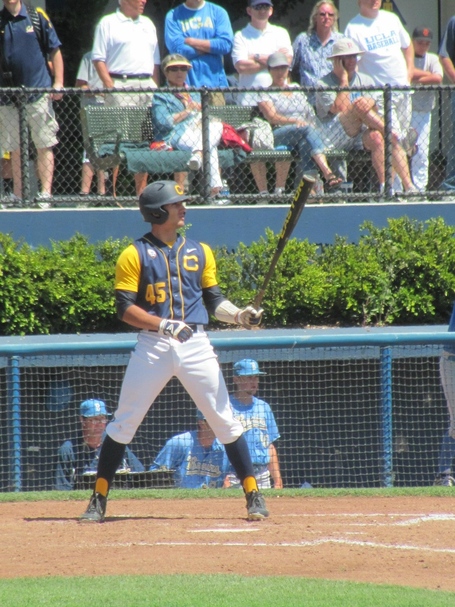 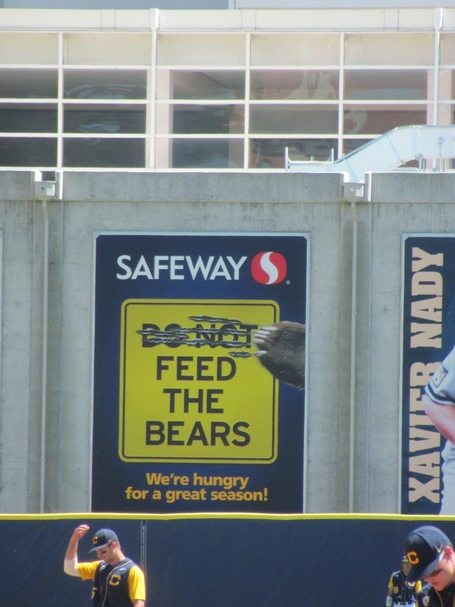 On this particular play, I managed to get a photo right before the Cal player made a rather cool dive just in time not to make the catch. But if I coulda gotten the dive! 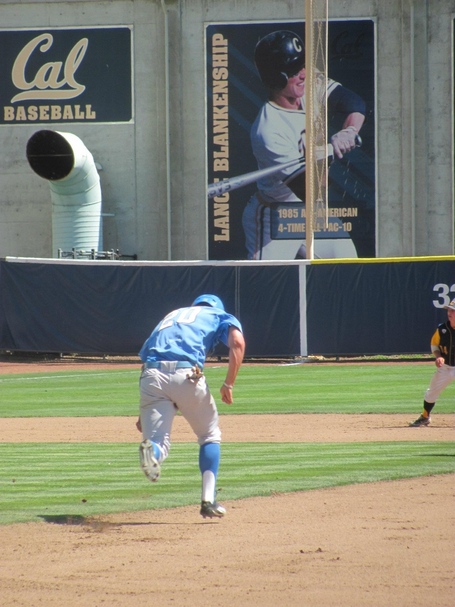 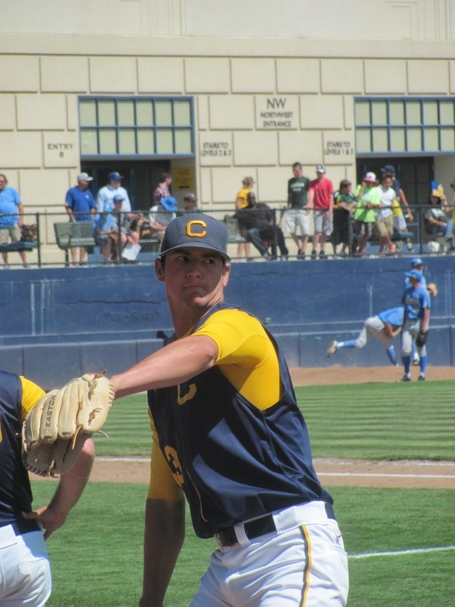 Things continued as they were (with Cal down 4-2) when another spark of life erupted in the Cal offense. Just when it looked like UCLA might sweep Cal on Senior Day and end the home season in 2012 on a sour note, Cal scored 4 runs. There weren't any home runs here, just a series of singles and doubles. A merry go round of Cal players on the bases as Cal batted around in the 8th. Cal had 4 hits and took advantage of a UCLA error to go up 6-4 heading into the 9th. 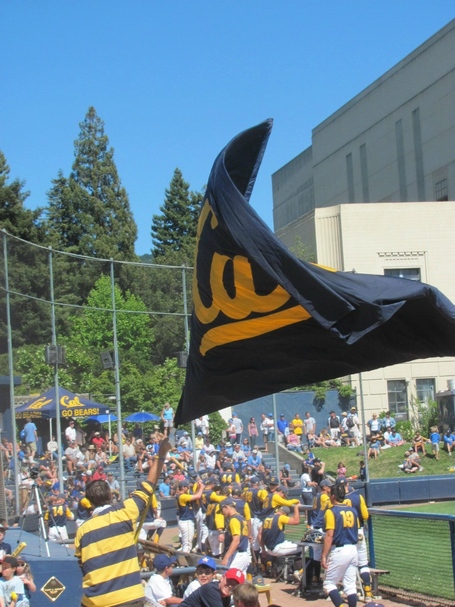 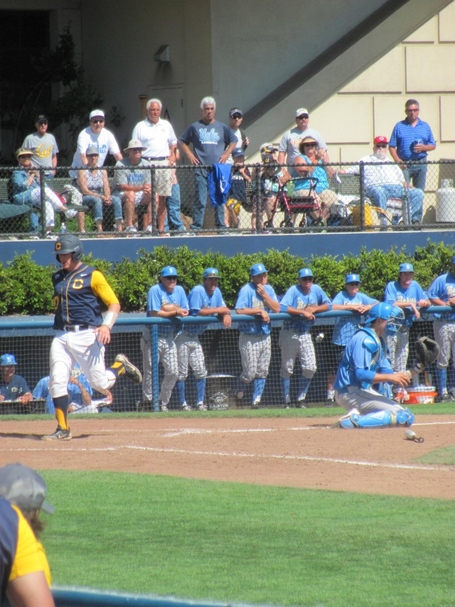 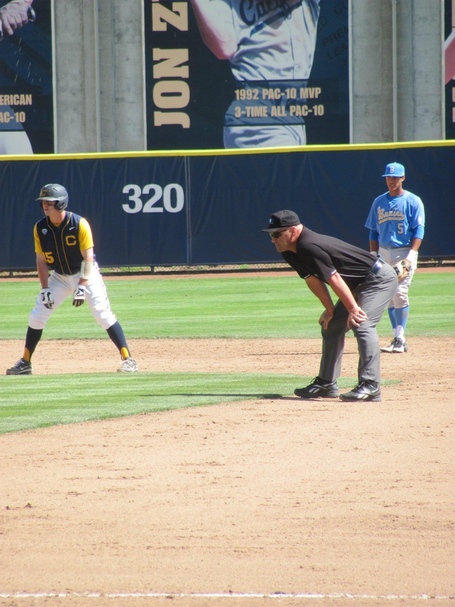 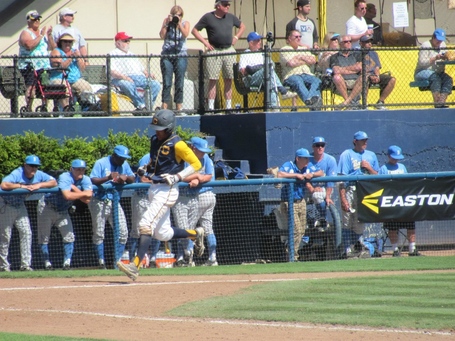 Pitcher Joey Donofrio, pitching in his 2nd inning of the day, got two quick outs, leading us to believe it'd be that great 1-2-3 inning we were looking for. Then, everything started to fall apart. UCLA strung together a few hits and managed to put another run on the board. It was 6-5 Cal and that insurance run loomed large.

It looked potentially bleak for Cal as, despite having 2 outs, UCLA got runners on 1st and 3rd. A bloop single to the outfield could tie the game. Donofrio managed to strike out the last hitter, though, ensuring maximum drama at Evans. Can anything ever go smoothly for the Golden Bears?

But with that called 3rd strike, the game ended and the home season ended for the Golden Bears. 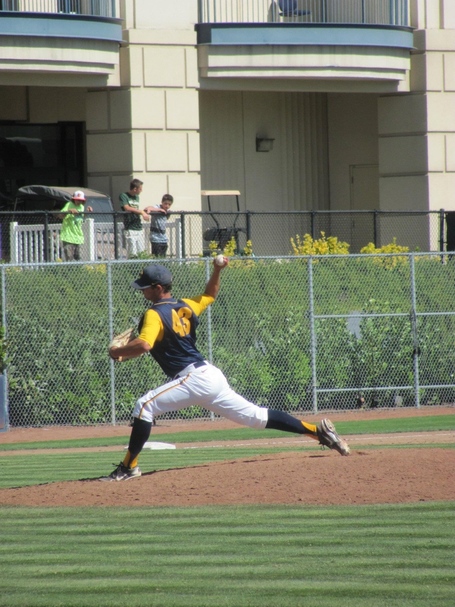 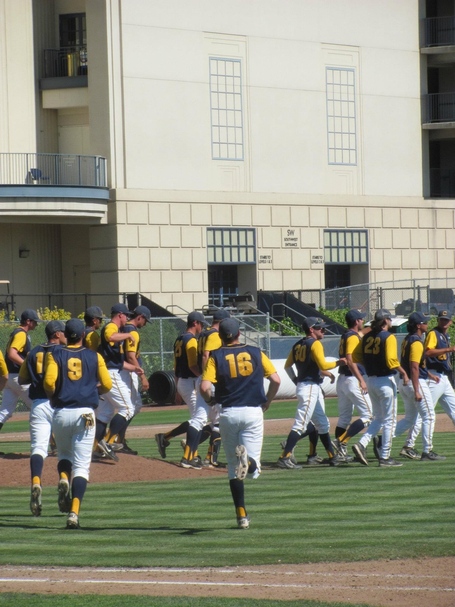 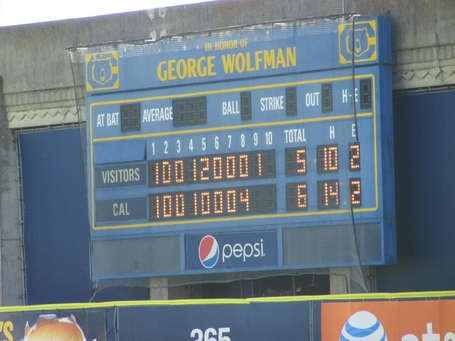 Yes, Cal isn't having a great season. Yes, it is a disappointment. Things will wrap up down at the Sunken Diamond this weekend. A post-season berth appears unlikely. But let's look at the bottom line here. Even having a 2012 season appeared unlikely last year. Even having games, even having a season, even having me sitting out there on May 20, 2012 is a victory. It won't be a victory reported in the standings and the grumblings about Esquer have restarted, after a brief respite in 2011. But when the patient is sick, I try to at least think "Well, at least he's not dead!" It is sad that that is the positive we can cling to? I guess so.

But the first thing I thought of when they announced that they might cut the team last year was that I'd miss out on days like today. Gorgeous, sunny days where you can sit 10 feet from the action. Amazing days where you can see top flight athletes before they make it to the majors. And, win or lose, those days are here to stay. I can't wait to go to games at Evans Diamond in 2013 and for years to come.