Our final Hall of Fame match-up for this weekend comes out of the Brick Mueller region and features two football standouts on opposite sides of the ball. Geoff McArthur was one of the most incredible wide receivers Cal has ever had simply because he seemed to catch everything thrown to him, no matter what the pass was like or how many defenders were covering him.

And on the other side is Mike Mohamed, who's instincts and athleticism seemed to always have him in the right place at the right time to make a play (Andrew Luck certainly agrees). He came in unheralded and left as a star.

This should be an interesting match-up to see unfold, as both of these guys have epic Big Game performances to draw on and both are pretty well-known and well-liked Golden Bears. However it turns out, the winner will move on to face Carli Lloyd. You can browse the whole bracket here. The full write-ups are after the jump and as always, the voting will end on Friday. GO BEARS!

From the HOF nominations:

thehawkse7en makes a simple and concise case for why Geoff deserves the honor:
Didn't have the overall skill set that some of the other receivers had, but he put up the best, monster numbers and was simply a beast. Wouldn't we love to have him now??

CALumbus Bear adds in his thoughts:
Wasn't G-Mac second in the NATION (behind Larry Fitzgerald) one year in receiving yards? He had the best hands evair, maybe even better than D-Jax when it came to muscling a ball away from a defender. He deserves it. Vote for G-Mac!

Kodiak: You can't overstate what GMac did in the Big Game. EVERYONE knew that he was going to get the ball. And it didn't matter. Double coverage. Triple coverage. Guys clinging to his jersey and ripping off his jock - he still came down with the ball. ‘Furd tears were ever so sweet that day, and it was all because of his individual brilliance. 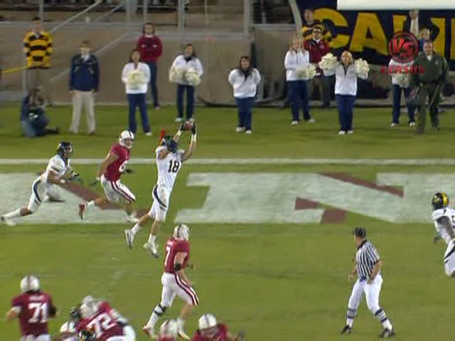 Royrules sums it up nicely, "He of Big Game glory.
He went from an unheralded 2* recruit to a top-notch LB in the Pac-10." The pride of Brawley, CA, he was versatile and smart enough to play all three positions in a 4-3, or play either inside/outside in a 3-4. When fully healthy, he was an instinctive player who was a sure-tackler and equally adept defending the run or pass.