The next match-up featured here in the CGB Hall of Fame comes out of the Joe Kapp region and features former water polo coach Pete Cutino up against Tyson Alualu.

Pete Cutino was the long-time water polo coach at Cal and during his tenure he developed and maintained one of the top water polo programs in the country. He was also active in the USA water polo team and by all accounts was a great leader and motivator.

Tyson Alualu was a formidable talent on the Cal defensive line from the begining of his career in Berkeley and as he grew and developed as a player he became a dominant force on the field. This led to him being selected as the 10th overall pick in the 2010 NFL draft.


It will be interesting to see if Alualu has the power to take down Cutino in this matchhup, but I think that the prolonged greatness of the water polo program will propel Cutino to victory. The full write-ups are after the jump and you can take a look at the full bracket yourself right here. The winner is going to move on to take on the winner of the Joe Kapp/ Alex Fillipenko match-up. Of course, voting will end on Friday. GO BEARS! 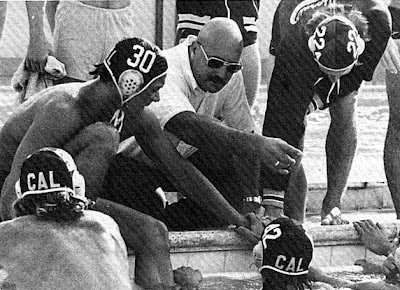 In 1963, Pete began working as a supervisor in physical education and coach of swimming and water polo at the University of California, Berkeley. Each of his swim teams from 1963 to 1974 had a winning season, and his water polo teams established an unprecedented record of having won eight NCAA titles as well as having been the runner-up four times, placing third once and fourth twice. In his 26 years as a coach at Cal, Pete was the all-time winning coach in U.S. water polo history. He was also a four-time NCAA and Pac-10 Coach of the Year, directing Golden Bear teams to a record of 519-172. Pete retired in 1989 on the momentum of a 33-game win streak and a second straight NCAA title. He coached 68 All-Americans, six Pac-10 and NCAA Players of the Year, and many Olympians. Pete also coached 13 teams to victory in the U.S. water polo senior national championships and served as the head coach of U.S. National Water Polo team from 1972-76, during which he led the team to the Pan American Games and many other international tournaments, including the World University Games.

Throughout his years on and beyond the pool deck at UC Berkeley, Pete Cutino worked tirelessly on promoting and raising funds for Cal Aquatics - to perpetuate the success he had built there. Along with Rick Cronk, Pete founded the "Splash Club," which consisted of supporters of the men's water polo and swimming teams at Cal. More recently, Pete was a driving force, along with Rick Cronk, Peter Schnugg, and many others, in establishing the "Friends of Cal Aquatics," a broader-based support group which continues to seek philanthropic support in order to insure that Cal's championship men's and women's water polo and swimming teams will have world-class training and competition facilities.

Watching him at the edge of pool was like watching a Bear in a Cage; you didn't want to mess with him. In the 80's Cal Water Polo was the ONLY sport that you felt like we were superior. Pete Cutino was frequently honored as an educator and coach, and was presented with the U.S. Congressional Award by the Honorable Leon E. Panetta. Pete received the Distinguished Alumnus-of-the-Year from Cal Poly, and he was also inducted into 8 Halls of Fame.
Cutino coached 68 All-Americans, six Pac-10 and NCAA Players of the Year, and five Olympians. "He taught us that anything worth accomplishing would not come without discomfort," recalls Kirk Everist, who played for Cutino at Cal and is now the head coach there. "And he was always there to administer the discomfort."
A few quotes fromPete:
1. "The opportunity to compete in sports is short-lived, and to compete at this level is truly extraordinary. So it is important to pause and reflect on the values and principles inherent in what you do. These principles can, depending on you, guide your future."
2. "If you are a champion, you become the standard, the target, and that is as it should be - in order for you to constantly develop towards excellence."
3. "Do not trade long-term values like character and dignity for temporary bravado and the in-your-face mentality."

Tyson Alualu had a solid career as a defensive lineman at Cal, playing in all 52 possible games of his Cal career (starting 40 of them). He was the anchor of Cal's defensive line in 2009 in particular, providing heart, soul, and a nonstop motor. Alualu's Cal career and talent was rewarded when the Jacksonville Jaguars selected him with the 10th overall pick in the 2010 NFL Draft.

In Remembering the Seniors, Hydro recalls his personal memories of Tyson.

While working for the team, I often worked with the defensive line. On one sunny day, some of the more senior defensive linemen were having a little chit chat between drills. Coach Delgado was firmly shouting out orders to players currently in the drill, and Abu Ma'afala, Nu'u Tafisi, and Mika Kane had just popped out of the drill. They had been talking about who among the defensive linemen, will become either really really good or become an NFL player. Between labored breathes, and with eyes fixed afar in thought, they pondered their nearby comrades in blue practice shirts and shorts.

Somebody mentioned a few people, and those names didn't really garner much response from the others. But then somebody, and I think it was Abu, suggested Tyson Alualu. I think he said something like, "I think Tyson has a good chance." The others immediately agreed with "yeah, Tyson." It was unanimous. The others weren't agreeing to agree, they were agreeing because they really believed Tyson Alualu would be the next great one.

Tyson wasn't there at the moment. I think he was in the drill itself. He didn't hear those words, but I did and stored that memory away for today.

I've written about this before, but for those of you who have ever done something enough to know what it takes to be good at that something, you know you can judge the talent and potential of others at becoming good at that same task. For example, and I'll use myself, I grew up playing a musical instrument. I turned out to be decent enough to make a few honor bands. I knew who was good, and who wasn't. I knew who had potential to be a pro, and who didn't. Those experiences I had helped me judge others, and that's exactly what was going on in the conversation between Tafisi, Ma'fala, and Kane.

Upon hearing those words, I made a distinct effort to keep an eye on Alualu from then on. I'd be stupid not to since his teammates pegged him as the one of the next greatest ones.

This story I am relaying to you occurred in 2006. Tyson Alualu was a freshman in 2006. The elder defensive linemen picked him out as a freshman. They could see the talent and potential that early. It was that obvious.