9th seed Cal Bears take on the familiar UCLA (top seed) in the Quarterfinal round of the NCAA Tennis Team Championship. This season Cal and UCLA have split two duals: UCLA won 4-3 in Westwood (but the Bears were without top singles player and 2011 NCAA Singles Champion, Jana Juricova) and Cal won 4-3 in Berkeley. The rubber match will determine who advance to what has become the Pac-12 half of the bracket as the winner will take on the winner of the USC and Stanford dual in the National Semifinal. 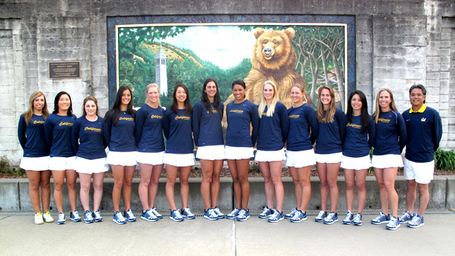 If the Bears use the same lineup as their last win over #26 Georgia Tech on Thursday and so does UCLA in their win over Rice, then we will see

That's a lot of ranked players for both side in a dual that may likely being dependent again on who wins the last finished singles.

A little reminder about how team tennis scoring works:

Three doubles matches happen first, playing a set to 8 (with tiebreakers). The school that wins 2 out of the 3 is awarded one point for doubles. Next the six singles matches are played (best of 3) with each match worth 1 point.

Through the link above, one gets to pick which of the 6 courts to watch (usually, the 3 doubles matches happen in courts 1, 2, and 3).