Our second match-up of the day features a recent football senior and a recent basketball star that has recently made his mark in the NBA. Mychal Kendricks, recent draft pick of the Philadelphia Eagles takes on Ryan Anderson, the recent winner of the NBA's Most Improved Award.

Kendricks was a mainstay in the Golden Bears defense for many years and I think that everyone reading this has to say that they appreciated the intensity and skill with which he played the game. I am sure he'll make his mark while playing on Sundays next year and he should be just as fun to watch in Eagles green as he was in Blue and Gold.

Ryan Anderson was one of the few bright spots for the pre-Monty Bears basketball team. He came out early and was drafted by the Nets and then later moved on to the Magic, where he was really come into his own both as a player and a scorer.

This is a really tough match-up to call as both of these guys are beloved Bears and have had recent success. Should be interesting to see how this round, out of the Pete Newell Region, plays out. You cantake a look at the whole bracket here and as always, voting ends this Friday. GO BEARS! 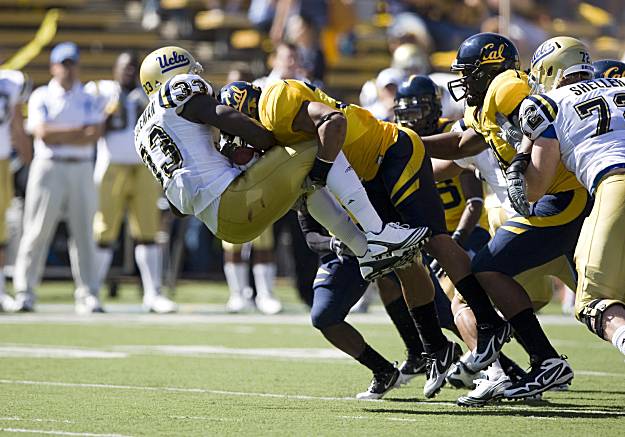 Earned several All-American honors as a senior, including second-team selections
by Phil Steele and College Sports Madness ... also a third-team All-American
selection of Yahoo! Sports and an honorable mention pick of SI.com ... named the
Pac-12 Defensive Player of the Year and a first-team all-conference selection as a
senior, after earning second-team all-league honors during his junior campaign ...
finished his career with 258 tackles to rank tied for ninth all-time at Cal, while
adding 36.5 tackles for loss (-144 yards) to miss finishing among the school's all-
time leaders by one-half of a tackle for loss ... also had a punt return in which he
was credited with 26 punt returns yards after he blocked a punt before teammate
Bryant Nnabuife picked the ball up and ran 30 yards for a score vs. Colorado State
in 2008, five pass breakups and a forced fumble ... recorded at least 0.5 tackles for
loss 24 times in his career, including in 19 of his final 25 games ... played inside
linebacker as a 2011 senior after spending most of his collegiate career as an
outside linebacker.

You can check out some of his highlights here

Was/is an absolute monster. In my opinion, if he had stayed 4 years, he would have
been considered an all-time Cal great. His freshman year he was robbed of Pac-
10 Freshman of the year. His sophomore year he was one of the most underrated
basketball players in the nation. He got absolutely no national recognition (talks
about it here around 3:23), mostly because he wasn't on a tournament team. Look
at that team. The people surrounding him were pretty much awful (PChris was the
only other good player on the team. This was back when Jerome Randlewas the
Nate Longshore of basketball). His starting point guard had a 1.2-1 A-TO ration. ERIC
FUCKING VIERNEISEL AVERAGED 24 MINUTES A GAME ON THAT TEAM. I
think I would give Vierneisel a run for his money in a pick-up game. He had a .298%
on threes and still shot 84 of them. And don't even get me started on Devon 'I'll give
effort when I feel like it' Hardin. The point is that Anderson was that team. He was the
only reason we made it to the NIT. That team minus Ryan Anderson would have had
single digit wins

I am still angry that he never got any national props. Look at his stats that year: 21.1
PPG, 9.9 RPG, 49% from the field, 41% from three, 87% FT. He almost (and look how
close he was) threw up a 20-10 in one of, if not the toughest conference in the nation.
The Pac-10 was getting abundant love that year thanks to Love-Mayo-Bayless-Lopez
twins-Budinger-Harden-Afflalo-that whole Wazzu team-etc. However, the guy who
was most valuable to his team and who arguably had the best season that year got no
love at all.

Kodiak: Incredibly versatile. Inside and outside threat. Equally adept at hitting
the 3-ball as finishing around the basket with an array of post moves. Even
started to incorporate a dribble drive game in his final year. Not an exceptional
athlete, he grabbed boards with smarts and scored over bigger/faster guys with
better fundamentals. If he had stayed to work with Monty, could have been one
of the best bigs to ever don a Cal uniform.